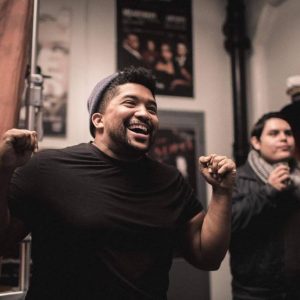 Bio: Monty Cole is a Chicago-based director and producer. He has directed for The Goodman Theatre, Victory Gardens Theater, The House Theatre, Definition Theater Company/ALTA, The Gift Theatre, Jackalope Theatre, and Something Marvelous. He directed Kristiana Rae Colon’s FLORISSANT & CANFIELD for the Goodman Theatre’s New Stages Festival and Laura Jacqmin’s END OF MESSAGE (EOM) for Victory Gardens Theater’s Ignition Festival of New Plays. Recently, he directed Shaina Simmons’ one woman show BAYOU BLUES which toured to University of North Carolina – Chapel Hill. Cole directed the critically acclaimed and 5-time Jeff Award nominated production of THE HAIRY APE for Oracle Productions. He’s currently developing THATCHER WOODS, a theatrical experience that he is writing and directing for the House Theatre of Chicago. He’s also directing American Theatre Company’s Youth Ensemble in an abridged version of PJ Papparelli’s THE PROJECT(s) and workshopping a theatrical adaptation of John Howard Griffin’s BLACK LIKE ME. He will also write and perform a two person show with his wife entitled THAT UNNAMED FEELING this Summer as part of the Chicago Theatre Marathon. Monty is an MFA Directing candidate at the California Institute of the Arts.

Why do you want to write for Rescripted?: I’d like a public forum to speak about issues in Chicago Theatre.

What are your artistic disciplines?: Director/Playwright

What “lenses” do you bring with you when you go to a show?: Black, activist, straight, suburban, married

Who is your favorite theatre artist and why?: Es Devlin. Because her creativity has no limitations and it’s all based on diving into something personal.