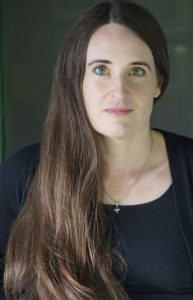 Why do you write for Rescripted?: Because theater artists deserve to be covered in a serious and substantive way. I love the idea of artists responding to and chronicling each other’s work from within the community.

What are your artistic disciplines?: Playwriting, dramaturgy, script reader.

What lenses do you bring with you when you go to a show?: Foremost that of a writer. I also have the lenses of being a woman, an American, a Chicagoan, a parent.

Who is your favorite theatre artist and why?: My favorite theater artist is Kim Maxwell. After college I went to work for Kim when she was Artistic Director of a 50-seat storefront theater in Ojai, California, the now defunct Theater 150. The place was a converted pool hall squeezed between a thrift shop and a run-down bar. Every chair was different because they had all been picked up off of the side of the road on “big trash day.” We had a secondhand lighting board, a shoestring budget and our sets were made from stuff we scavenged. But the work was extraordinary. People would drive 80-miles from LA to see Kim’s shows. Her ensemble was top notch and her board was devoted to her. My experience there taught me not only what goes into making great theater, but also that professionalism has nothing to do with budget and everything to do with dedication to the craft. Kim is also a wonderful actress and teacher who has trained hundreds of young artists and done much for the American theater through her support of new work including through the Ojai Playwrights Conference, which she cofounded.

Bio/Website : HALLIE PALLADINO is a Chicago based playwright and essayist. Her plays include Infatuation (Dandelion Theater’s Reservoir Series), Missed Connections (Idle Muse Theater’s Athena Festival 2015; Pride Films & Plays LezPlay Festival 2015) and Sunrise: Ardmore Beach (Something Marvelous Festival 2015). Recent essays appear in The Point and Thread. Her scholarly work has been published by Demeter Press. In 2008 she cofounded the long-running Chicago reading series Tuesday Funk. She is also on the literary committees at Stage Left Theater and Something Marvelous. She lives with her husband and their two children in Chicago’s Edgewater neighborhood.

You can read her work on New Play Exchange: https://newplayexchange.org/users/11167/hallie-palladino