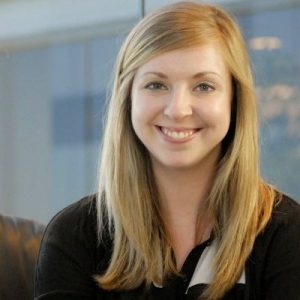 Why do you want to write for Rescripted?: Because this industry is one giant melting pot of beautiful artists, contributors, creators and leaders and we can all learn from each others’ experiences!

What are your artistic disciplines?: I received a Bachelor of Arts in Theatre in 2007, and a Master of Fine Arts + Master of Business Administration in Theatre Management in 2015, specializing in non-profit arts marketing. I’m no good on stage, and am pretty mediocre at Photoshop, but using social media to create and promote the voice of the artists or organization I’m working for is probably the most fun. It’s a direct connection with our fans and making everyone feel like a VIP with insider looks into what we do on stage gives me so much joy. Even though I’m sure Facebook will probably die soon and there will be a whole new beast I’ll have to figure out…. 😉

What “lenses” do you bring with you when you go to a show?: I’ve lived in the North & South east, New York, Los Angeles and San Francisco, big cities and small, and though I hated moving around so much as a kid, I’m glad I didn’t grow up with only one perspective of how people treat each other in the world. I’m a white cis female, and though I’ve dealt with my fair share of unequal treatment at work and school, I recognize that my white privilege has gotten me to where I am today and I try to use it as much as possible to help my friends in marginalized communities. I didn’t grow up rich or poor (my parents were both teachers, so I highly valued my education and understand the struggle of all my teacher friends, especially those working in public schools), and I’ve had jobs since I was 15, so I paid my own way through undergrad and grad school. I live paycheck to paycheck like most people my age but am proud of my hard work and the fact that I can support myself and hope to someday be able to raise either my own children, and/or support my aging parents when the time comes.

Who is your favorite theater artist and why?: I think it would have to be John Cameron Mitchell, best known for creating the character and story (and co-writing music) for Hedwig and the Angry Inch. The dedication to the character and telling her story over almost a decade in off-off-off-Broadway venues, etc., to adapting the story for film, to then another 15 years later finally getting to bring her story to the mainstream and reviving it on Broadway takes such patience, persistence, and grace, I am simply in awe of him and the whole creative team that has stuck with him through this journey. When we think of how far we’ve come, and how far we still have to go, to bring LGBTQI+ stories to the mainstream, and have them be embraced and accepted by the masses, the fact that he’s been able to achieve this—AND appear on Broadway to revive the role almost 20 years after he first performed as Hedwig—is amazing and so inspiring. Clearly, it’s my favorite show of all time, but I am also just so inspired by all the work he’s poured into it, and hope that other LGBTQI+ artists are able to achieve similar success with their stories.

Website or bio?: You can find me on the MTC staff page!