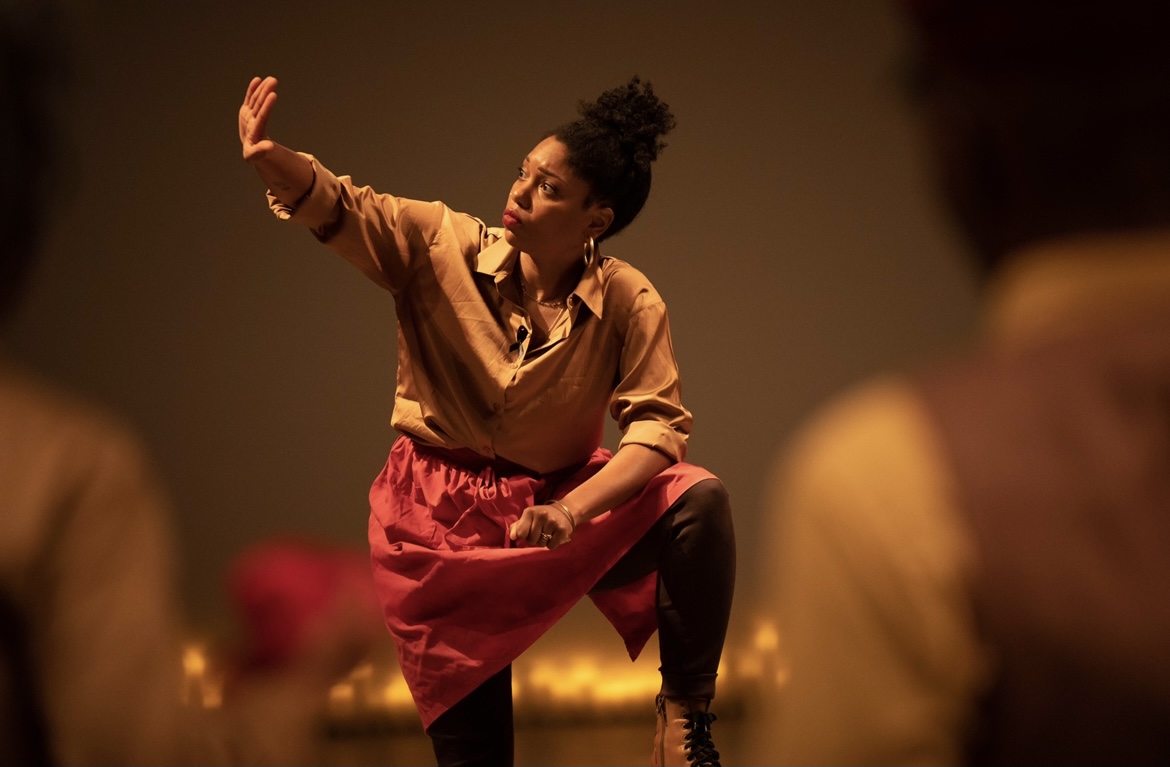 When audience members enter What To Send Up When It Goes Down by Aleshea Harris, produced by Congo Square Theatre, we shuffle quietly into the lofted warehouse-style space. As we find our seats on either side of Lookingglass’ playing space, it feels a bit like the beginning of a wake, and in a way it is. A few cast members mill about the space, and one (Joey Stone at our performance) hands out black ribbons to wear in solidarity with Black people that have been victims to, or killed by police violence.

At this performance, Chanel Bell announces we will be performing this ritual for Botham Jean. The performers invite the audience into a circle to begin the ritual to commemorate one of those felled by racist violence. A participant may choose not to take part in the ritual, but they just ask that you center Black voices in the space, and don’t disturb those who do choose to participate.

The ensemble of What to Send Up When It Goes Down is dynamic and well-cast, with a diversity of engaging storytelling styles that matches the elastic challenges of the work. Watching the piece, I considered that these might be some of the best orators of new works that we have in Chicago. Chanel Bell harkens the arrival of the ancestors with her fiery delivery that soars over her costars’ movement sequences. Willie “Prince Roc” Round transcends as the bridge between earth and heaven, embodying the spirit of those we have lost to police violence. Jos N. Banks serenades the crowd multiple times, leading soulful call and response, and a very satisfying moment of vocal foley. Penelope Walker plays a jittery white woman with uncanny specificity in an incredible play within a play, supported by Joey Stone’s acute and pointed comedic style.

There is no shortage of talent onstage. Alexandria Moorman delivers a hilarious sermon about snatching the mouth off a white co-workers’ face. A real treat of this production is McKenzie Chinn, a locally famed poet as part of Growing Concerns Poetry Collective who recently gained national fame through her work as a screenwriter. It’s refreshing because everytime you start to get comfortable with the excellence of Chinn’s performance, she hits a new emotional high note that draws you back in and reminds you of her expert storytelling ability. Chinn is not to be missed on any stage.

Though the set design (Sydney Lynne) is sparse, it is intentional – you are to focus on the people telling the story. The space is configured into an alley setting that crescendos into an altar with a base of sand, and an ever-creeping array of letters that stretch into the sky. These letters hang from and appear to disappear into a large metal hoop that invokes the portal to the afterlife the play opens and closes. Levi Wilkins’ bold strokes of lighting and saturation of color further aids the creative movement work (Charlique C. Rolle), the joy and song that fills the room, as well as the more intimate dramatic scenes.

This is not a play, it’s a ritual. That is the foremost thing to remember when viewing, or reviewing this piece. Its dramatic form however, is evident and comes from a writer well-versed in how to engage her audience. The only thing that I found curious was how much the piece reminded me that Black Lives Matter is often a gendered movement. The person we were sending up was Botham Jean, and that may have been why. To me, the text invokes the powerful power of female witness, and a lot of the labor of emotional processing falls on the femmes in the piece, to guide us through our feelings. They are the ones that primarily drive the homegoing, that hold the depths of the more dangerous anger and emotion, which frankly rings true. The piece delivers what it intended to do, and I consider it a benefit that the piece makes me hungry for more like it from differing perspectives. I’d like to see a night where a femme is being honored to see if it feels like the masc bodies are sending her up, or another piece entirely that gives us this dynamic in reverse.

Ericka Ratcliff and Daniel Bryant deliver a well-paced production that cascades into itself and leaves you breathless, but Harris’ ritual closes with care, so you feel like you’re entering the real world again with buoyancy. This weekend will be your last chance to catch What to Send Up When It Goes Down and I highly recommend making the time to see it before it closes.