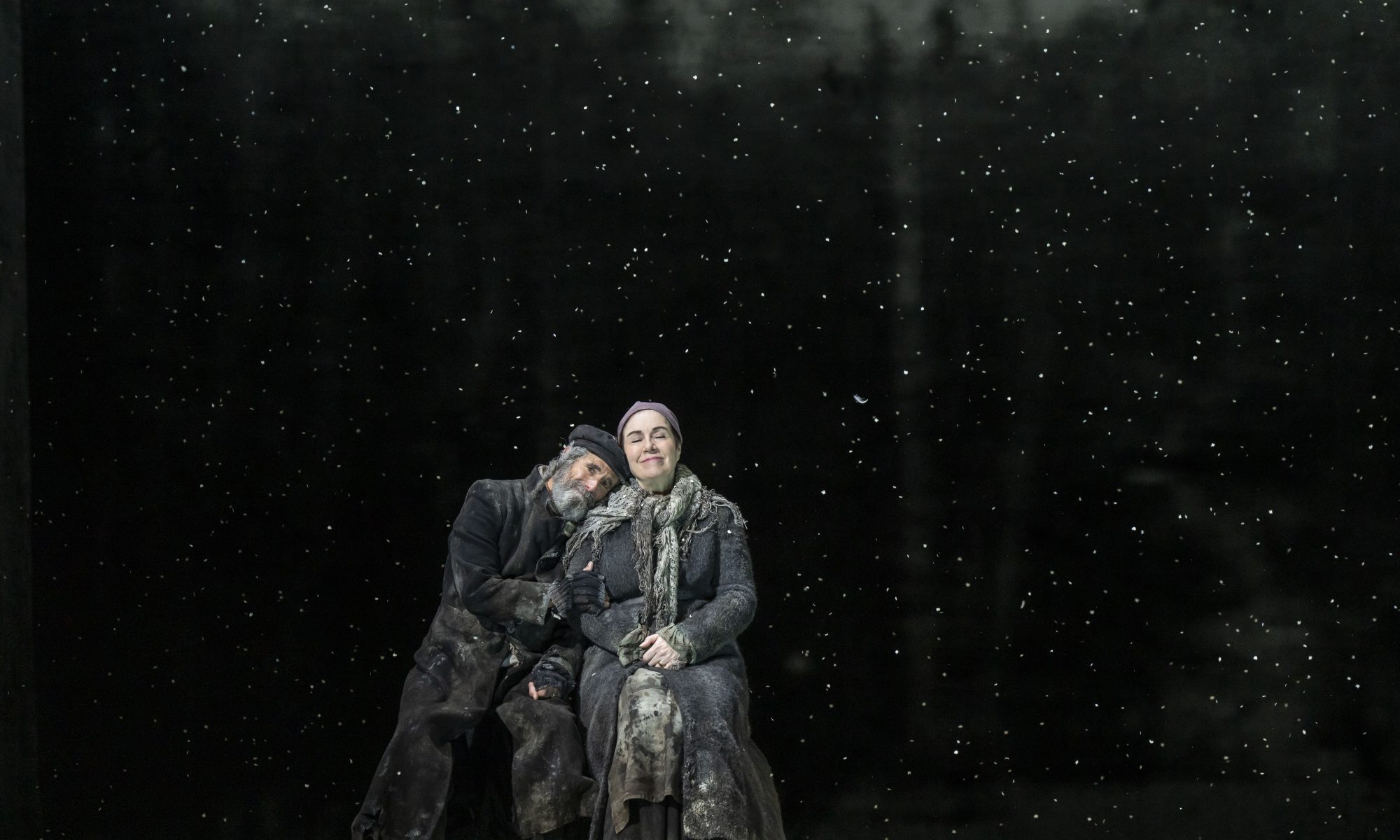 I fully knew what I was getting myself into when I sought out a press ticket for Fiddler on the Roof at the Lyric Opera. As a lifelong devotee of the show, with a deep spiritual connection to the material, I suppose it was inevitable that my biases (unavoidable for any critic) would eventually spiral into full-fledged opinions about how I believe Fiddler should be done. And indeed, in a dismaying and ironic twist, it turns out that I am a bit of a “traditionalist” when it comes to Fiddler. When somebody tries to get even a little bit artsy or figurative with it, my inner old fogey inevitably rises to the surface (although to be fair, he’s never that far below), and so this is an important grain of salt to keep in mind as you read.

This is not to say that I did not enjoy this production; far from it. But for every element onstage that left me cackling with glee, there was another that I found utterly and completely baffling. Many of the directorial choices seem utterly disconnected from Fiddler’s themes. The musical is almost 60 years old at this point — and yes, a new production that’s basically just a remount, with no new choices and nothing new to say, isn’t going to cut it these days. However, it feels like the director’s choices to change certain aspects were made without a full comprehension or appreciation of the work’s themes. Fiddler is an incredibly intelligent show, with many crucial little details that all fold together in a complex clockwork of joy and heartbreak. Messing with that clockwork, then, is not a task that should be entered into lightly, and one which can easily be derailed.

As an example, let’s focus just on this production’s interpretation of “Tradition,” the musical’s opening number.

Immediately upon entering the opera house, we see a beautiful backdrop from set designer Rufus Didwiszus; a monochromatic winter scene with the impressions of black trees and a white sky, interrupted by a dark brown wooden door center stage.  When the announcements are concluded and the house lights dim, the first thing we hear is a modern pop beat that sounds like it’s coming through headphones with the volume all the way up. I legitimately thought somebody had left their cell phone on.

Then, a kid (the very musically talented Drake Wunderlich) enters on a Razor scooter in modern dress, listening to the pop beat on his headphones. He rides across the stage, and exits. He rides back in, opens up the centerstage door, revealing a closet complete with modern-looking hangers and coats. He puts the scooter away in the closet, pulls out a violin, and turns out the kid is the Fiddler! You know, the one on the titular Roof, despite never actually occupying a roof throughout the runtime.

This is clearly meant to be a subversion of our expectations, but mere seconds into the show there is nothing yet to subvert, and so the overall impression is merely baffling. Tevye (Steven Skybell, in a truly incredible performance; soft-spoken yet powerful, subtly hilarious, a pinpoint combination of needle-sharp wit and repressed rage) pops out of the closet, followed by the rest of the village of Anatevka shortly afterwards. And as this iconic opening number unfolds, Tevye and the ensemble introduce themselves and the setting NOT to us, the audience, but to the Fiddler Kid (the Kiddler, if you will). This means their attention is not focused outward, on the massive opera house audience, but on a small point directly in front of them, making “Tradition” feel contained and small rather than big and bombastic.

Now, a critical eye can discern the intended symbolism of the Kiddler: he delves into the closet in his house and ‘discovers his past’, so to speak. Perhaps there’s an old photo album back there, and the musical unfolds before us as the kid discovers his family’s roots. They all sing to him because they’re communicating to him from the past, and introducing him to the world. But to that I say. . . we’re sitting right here! Introduce the audience to Anatevka! We are the modern humans that you’re supposed to be transporting into the past! To cut the audience out of the equation, and instead turn the opening into a conversation between Tevye and Kid Fiddler, renders the proceedings distant and removed.

“Tradition” usually consists of some controlled yet energetic dance as the different groups of the Papas, the Mamas, the Sons, and the Daughters all make their way downstage to introduce themselves and their role in the shtetl. However, because this number takes place in front of the backdrop, the large cast of over forty people is shunted downstage, severely limiting the amount of choreography they can do and creating the feeling of a large party hosted inside a telephone booth.

One would think this would only damage the opening number, but the consequences are long-reaching. Towards the end of the song, Tevye introduces “His Honor the Constable, His Honor the Priest, His Honor the. . . many others” to the audience. In most productions, this is our first glimpse of gentile characters in the show. The Constable, the Priest, and a few other Russians in brown coats usually walk across the stage in a dignified manner — and importantly, the Constable nods to Tevye, giving us a subtle indication of their tense friendship that will become important later in the show. But the packed playing space necessitates that this traversal be cut completely, and so Tevye tells the Kid Fiddler about the goyim of Anatevka with no visual aid. Therefore, the first time we see Tevye and the Constable together is their first conversation after “To Life,”  in which audience members new to the show are left without a clue as to who this man is or why he’s talking to Tevye. Subsequently, when the attack on Motel and Tzeitel’s wedding happens in this production, the Constable does not show up to call off his men, as is indicated in the script. This is a critical juncture for him; it is the moment when his moral grayness is most potently driven home.

The Constable is a decent-seeming character who becomes a villain through his tacit participation in an unjust system. He enjoys his friendship with Tevye, which instills in him the belief that Jews are people, despite what his superiors would have him believe. Yet his job requires him to commit violence on Jews, and so he allows it to happen regardless even as he tries to curtail the worst of it. His wages, the well-being of his family, and his position of power are all on the line — at the cost of not only his morality, but his self-perception as a decent man. All this from a character with only four brief scenes! By cutting two of them, an entire thematically important character arc is thrown out with the bathwater.

Once the opening number concludes, the backdrop rises and we are introduced to the rest of Didwiszus’ set. The entirety of Anatevka seems to be constructed out of weathered wooden wardrobes, possibly because the show is taking place inside Kid Fiddler’s own closet. I quite like this idea; I have written before about the symbolic resonance of furniture in Jewish culture. Didwiszus has created an enormous and dizzying wall of wardrobes that stretches across the front of the stage, fostering a feeling of height and claustrophobia. The use of well-worn furniture, however, contrasts that ominous vibe with a lovely feeling of domesticity. Particularly in scenes with Tevye’s family, the close quarters and multitude of doors make the house seem crowded bordering on oppressive, but also cozy and well-lived in.

On the other hand, there are two unfortunate downsides to such a set. Because this wooden wall of cobbled-together furniture is on a turntable, the potential comparisons to Les Miserables become distracting; I half expected someone to shout “You at the barricade listen to this!” in a Yiddish accent.

The second downside is that because the wall mostly remains towards the front of the stage, the telephone booth problem continues to affect almost every single group number in the first act. “Sabbath Prayer” is a number meant to be an intimate glimpse into every house in Anatevka as the whole community celebrates the same weekly ritual in separate houses. And indeed, it retains its magic through the transcendent and heavenly singing from the ensemble. Due to the limited space, however, the ensemble can only shuffle tightly onstage, sing, and tightly shuffle off again. “To Life” is a glorious number where Jews and gentiles, initially separated on different sides of the local bar, gradually come together and dance to celebrate Lazar Wolf’s engagement. The dancing, from choreographers Otto Pichler and Silvano Maraffa is energetic, acrobatic, and incredible throughout the show, and given a particular chance to shine here. But because there are so many people packed into the bar, Jews and gentiles are practically tripping over each other from the start, robbing their eventual camaraderie of its synthesis.

Again, the dramatic action of Fiddler operates like clockwork.  If even one tiny cog is out of place, the emotional and political themes at play are severely damaged. Trust me when I say that this production is full to the brim with moments like this, and that if I were to go through all of them we would truly be here all night.

The problem here lies not in a dearth of quality, joy, or passion, but in an injudicious scattering of too many new elements. Many of these elements show incredible promise; I was a particular fan of the male dancers added to “Matchmaker;” it is a waltz, after all. The music deserves particular praise. The score of Fiddler is already hauntingly lush, with sweeping melodies that are at once heartbreaking and nostalgic. Combined with the sheer mastery of the massive Lyric Opera orchestra (under the capable baton of conductor Kimberly Grigsby), the score soars to new heights, feeling almost biblical in scope.

To me, however, though the parts are at times beautifully assembled, the whole does not cohere into a cogent statement that expands upon the themes of Fiddler on the Roof. This show’s observations as a piece of historical fiction have only grown more urgent over the last six decades. Its haunting, tragic portrayal of intergenerational trauma has earned much rightful praise, but what struck me most on this viewing was its commentary on police brutality, and the state’s reasons for enacting it. Once again, however, the changes to the Constable’s arc have in my opinion robbed this theme of its teeth. I look forward to a future production of Fiddler that not only captures its magic and joy as this did, but is also able to delve deeply into its darkest corners with precision, and come out with a meaningful message that we can all act upon.

Fiddler on the Roof runs at Lyric Opera of Chicago through this weekend.