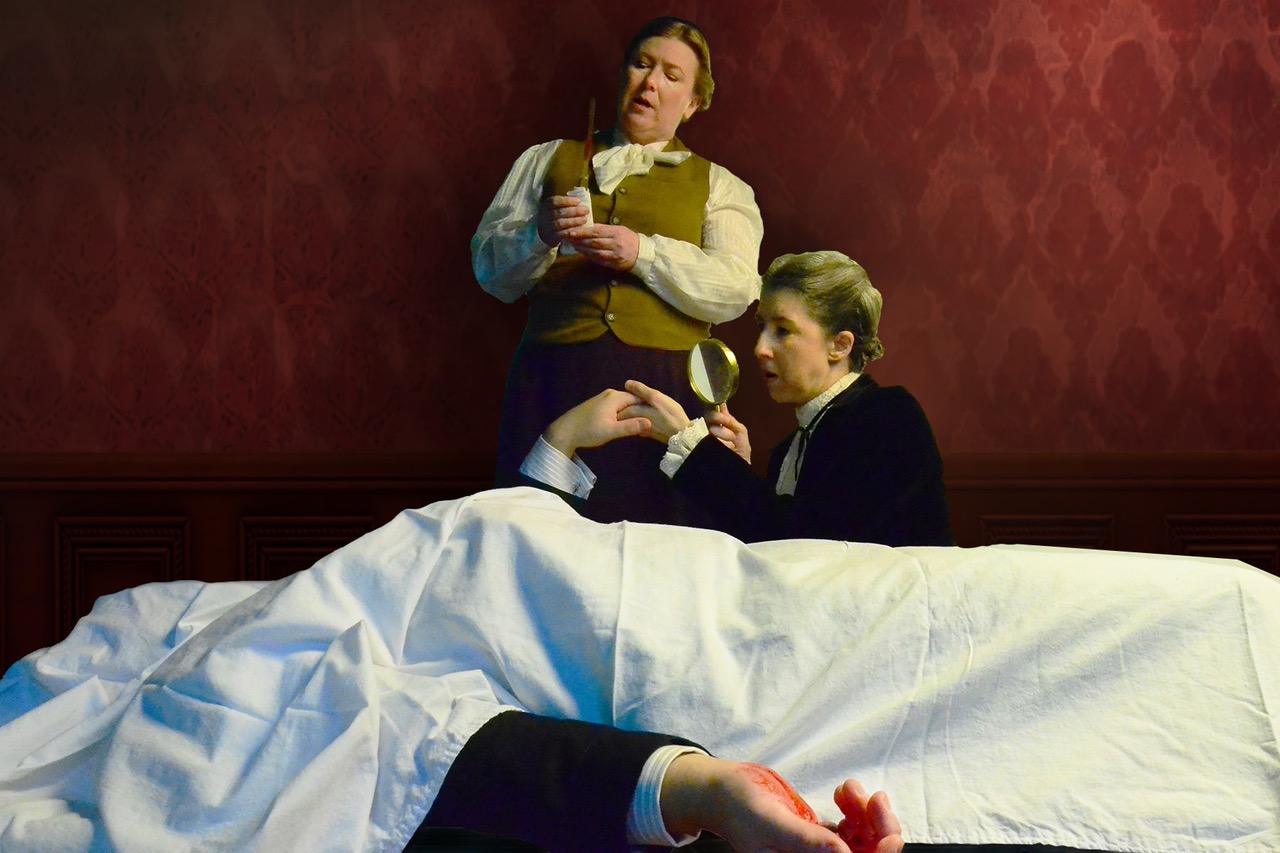 Miss Holmes Returns at Lifeline Theatre is one of those rare shows where the storytelling craft of it — the technical design, the direction, the performances, and the admirable effort and talent of everyone involved — is phenomenally executed with passion and panache, but is also somehow the least interesting thing about it. What really jumped out at me about Miss Holmes Returns were the themes: the things it has to say about fighting for what you believe in, finding the strength in admitting weakness, and how to enjoy the collapse of an empire. This is the rare historical piece that feels blisteringly relevant to the modern day; rarely have I had so much fun at the theater while also feeling so refreshingly validated by a show’s politics and message.

Alan Donaue’s brilliant yet simple set design immediately gives a good first impression. The last show I reviewed at Lifeline, The Man Who Was Thursday, also experimented with giving its London setting a dizzying sense of height — and here the set contains a similar mezzanine level, a bridge gilded with lampposts. The exposed brick of the theater walls is adorned with minimalist wooden windows to evoke a maroon brick cityscape. And in a likely unintentional bit of synergy, the brick walls of the theater stretch out to surround the audience as well, giving the proceedings an invigorating sense of continuity. This story, the set seems to say, is not nearly as separate from our modern world as its nostalgic lamp-light theatrics might indicate.

Christopher M. Walsh’s heartfelt and suspenseful script wastes no time setting up the premise of this adaptation. Immediately, we open on a scene we are all familiar with: Sherlock Holmes (the charmingly acerbic yet introspective Katie McLean Hainsworth), Dr. Watson (played with grace and ferocity by Mandy Walsh), and Inspector Lestrade (the stalwart and likable Linsey Falls) stand over a dead body (the hilarious and versatile Tommy Malouf) as Sherlock examines every detail to figure out what happened. The fact that Holmes and Watson are both women begins as an entirely incidental detail, but it does not remain so. Walsh smartly shies away from the obvious pop-feminist strategy of simply writing a normal, unchanged Sherlock Holmes mystery where the men crack cartoonishly sexist remarks, our heroes lob back some girl-power zingers, and we all die of boredom.

Instead, Miss Holmes Returns takes pains to actually grapple with historical feminist issues pertinent not only to Victorian England, but to our current dishonest decade. It is made clear to the audience at every turn that the gender swap has, at various points, made huge alterations to the Sherlock Holmes canon in accordance with the patriarchal structures of the era. Many Holmes adaptations, particularly those that skew towards the police procedural genre, tend to place Sherlock’s genius and veracity perfectly in accordance with the police’s goals, inadvertently contributing to the false cop-agandistic notion of the police as a social good. Here, however, it’s made abundantly clear that while Holmes and Watson’s partnership with Lestrade is amiable and genuine, the police’s true function of protecting only a certain upper echelon of British society is often at odds with Holmes and Watson’s aim of finding justice for victims and protecting the innocent. Being women in Victorian England fundamentally changes the types of cases our heroes pursue, the way they interface with everyone they meet, and how they are treated.

The inclusion of characters like Josephine Butler (a real, historical feminist activist played with dignity and poise by Julie Partyka) and Priya Singh (a fictional yet all-too-real depiction of a woman of color in Victorian England wrongfully accused of a murder, played with overwhelming empathy by Vinithra Raj as she attempts to do the responsible thing at every turn and is roundly punished for it each time) might have felt out of place in an adaptation that had less to say about the era in which Sherlock Holmes stories take place. Indeed, the juggling of tones here might have proved an impossible task for a lesser creative team. In turns, this play must rapidly ricochet between the suspenseful, the political, and the personal — three seemingly disparate aims that are woven together with precision and style. As is often necessary with a murder mystery, this is an extremely dialogue-heavy script, with lots of clockwork and exposition that needs to be precisely communicated. Director Elise Kauzlaric does incredible work at keeping these long and winding scenes urgent, tense, and exciting. In turns, I felt the character’s pain and fear and heartbreak, righteous anger at the forces our heroes were fighting, and a pressing curiosity to find out what would happen next.

It is all led, of course, by Katie McLean Hainsworth as Sherlock Holmes, whose performance is an absolute delight. She gives Sherlock the perfectly strait-laced and neurotic air we are accustomed to seeing, but also lets us see into the cracks. Too many gender-bent adaptations would be afraid to make Holmes anything other than a perfect, badass girlboss who’s unimaginably brilliant in every way and spends her time kicking ass and shooting out zingers. Instead, Hainsworth encourages us to see the cracks in Sherlock’s facade, emphasizing that weakness, vulnerability, and the need to depend on others are all fundamentally human things – and end up being crucial to her success in the narrative.

I don’t know if you’ve heard about this, but Queen Elizabeth II died this month — as it happens, the same week that I saw this show. All over the world we saw nearly every institution on Earth, from the FBI to the West End production of Les Miserables, put out statements on social media bending over backwards to mourn her loss. Many of these institutions fail our elderly citizens at every single turn, and all of them will go out of their way to display an almost comic amount of grief for an unimaginably wealthy woman who not only was the face of an evil empire to many, but who also died at 96, surrounded by family, in her castle that she owns in Scotland. Institutions across the UK ground to a screeching halt without regard to anyone dependent on their help, and anyone in the world who dared to crack jokes at the Queen’s expense was shushed and shamed for being anything less than glowingly respectful.

My point is that while Liz 2 may have overseen the official end of the British Empire throughout her reign, the impacts of British imperialism run deep in nearly every corner of the planet; people are still suffering from it. And so I found immense gratification in a story that not only emphasizes that the warning signs of the empire’s collapse were already there in the Victorian era, but acknowledges the frustration and anger that comes from having to fight against people who, consciously or otherwise, uphold unjust systems, even through acts of good intent like mourning someone’s death. In an era that often feels like the moment before the crash –  that potent moment as you are winched slowly towards the peak of a broken, creaking roller coaster – how does one brace for the impact? Well, one does it by relying on the strength of one’s friends, and by ardently and wholeheartedly fighting for what you believe in.

Hainsworth’s Sherlock Holmes begins the show as the detective we’re all familiar with from various adaptations — brilliant, aloof, and socially distant. But throughout the show, she is forced to face directly the horror of the bloody system that Josephine Butler is fighting against. And she is immutably changed by the experience; her aloofness and distance give way to passion and conviction. And that’s a beautiful thing to watch.