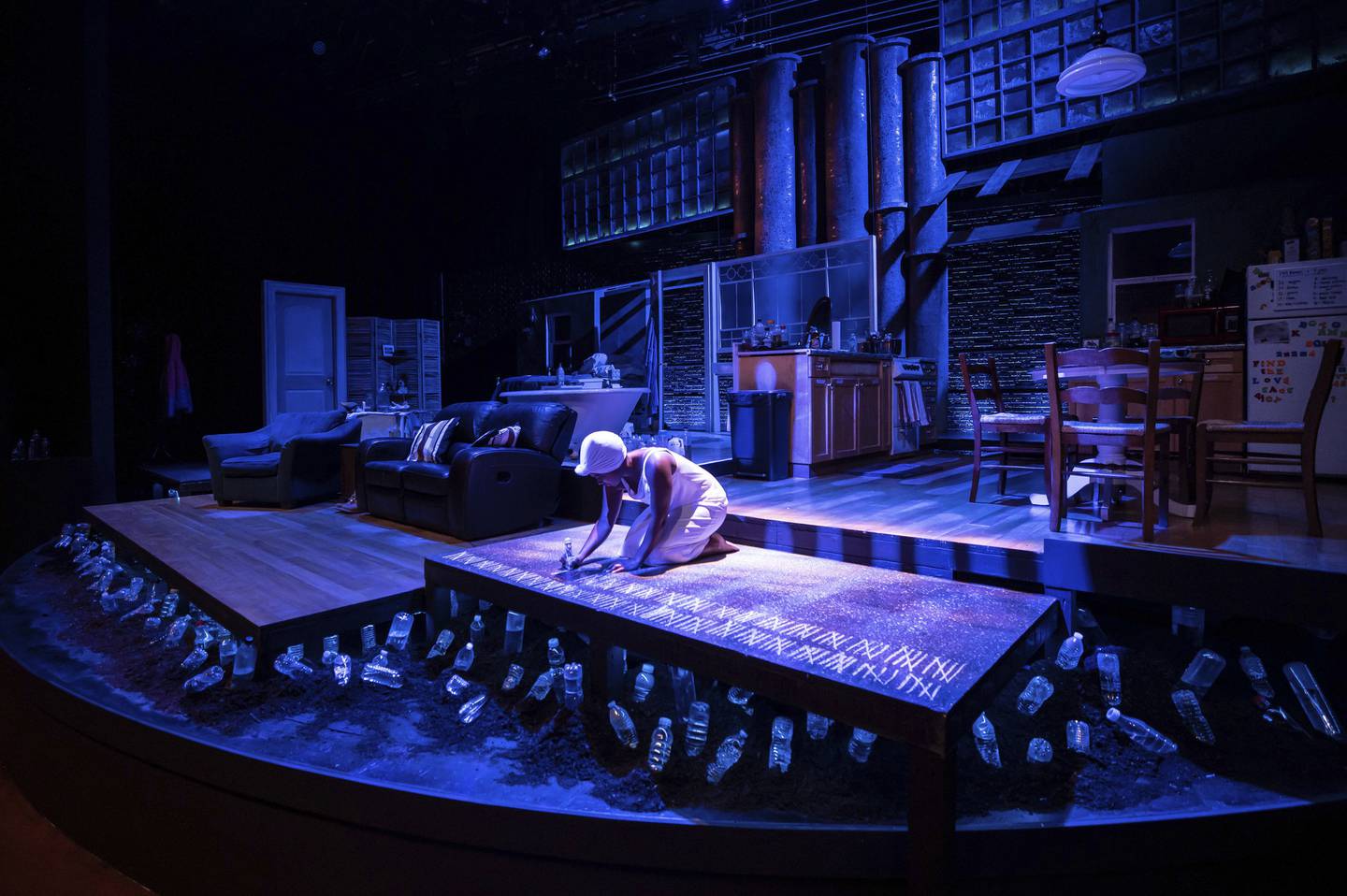 In the wake of Ken-Matt Martin, Eric Ting, and my own resignation from Sideshow Theatre on July 20th, 2022, I reflect on the path that led us here. I have not spoken to either of these leaders, and the thoughts and patterns represented are entirely my own unless directly quoted from other publications. This is a two-part essay, the first of which outlines the struggles Artistic Directors who are people of color face during pandemic leadership. The second, Resigning as Renewal: Visions for Artistic Leaders of Color outlines the victories leaders of color have had, and visions for how to create more opportunity for their success.

We need to talk about the stress, institutional disposability, and institutional obligation put upon artists of color. Leaders of color create so much wealth and abundance in the face of chaos, but when are we asking too much? The combination of non-profit infrastructure and a pandemic has created a loss of agency, a “fixer” dynamic, and prevented many from manifesting the vision they intended.

The Myth of Choice

This pandemic has narrowed the agency of artistic leaders. Every choice made is based on the immediate fiscal needs of the theatre company. Due to the stringent resources, constant state of emergency, and lack of job mobility in our field, it can feel like an Artistic Director does not have a choice in whether they leave or stay. At best, leaving means the staff a leader has hired to support them could soon be without jobs. At worst, it could mean the dissolution of their institution. How does one leave an institution in a pandemic when they might be putting others’ livelihood at risk? This is dangerous, because as one Artistic Director colleague said to me recently: without the power of choice, you cannot effect change.

When conflict arises, we throw theaters into chaos and risk the livelihoods of the staff and artists who call that theater home. Consultants are hired. Meetings are called. People resign. People get fired. And at the end of the day, artists and staff rarely have a seat at the table in determining what’s next. The artists are treated like children who need to be pacified, the staff like out-of-touch idealists who just want to complain. We make martyrs out of scapegoated leaders, while searching for a new savior figure to “fix” the mess. – Ken-Matt Martin, For Those Doing the Work

The Fiction of the Fixer

The structure of a predominantly white institution relies on an exceptionalist savior narrative when it comes to leaders of color. Whenever an institution is in a moment of crisis, they tend to call upon black and brown people, or women, to right the ship. Roxanna Connor was hired in an emergency situation at Victory Gardens Theater when Erica Daniels was on her way out. Ken-Matt Martin and her fellow collaborators are the only ones I see recognizing her work saving that theater. Boards and institutions will choose these excellent leaders in moments of fear. When it seems the crisis is coming to an end, they get brave again, and leaders of color become disposable.

A fictional representation of this is Olivia Pope on Scandal, a fabulous Black woman who is employed to fix the injustices her institution perpetrates – and that institution happens to be the White House. On the show, white co-worker Abby at one point gives Olivia the following speech: “You’re a gladiator. Gladiators don’t run. They fight. They slay dragons. They wipe off the blood. They stitch up their wounds. They live to fight another day.”

Slaying a dragon is an appropriate metaphor for what it feels like to run a theatre at this time. Why should sitting in wounds and discomfort be an automatic expectation of restructuring or leading an institution?

The job of an Artistic Director is to create and communicate a vision and culture for the company. They are responsible for knowing the aims of an institution anywhere from two to ten years in the future. This generative thought is sustained by seeing shows, reading plays, speaking to your peers, attending conferences, and generally being up-to-date on the cultural conversation of the moment. During this pandemic, most artistic directors I know have spent time that they could be putting towards generative thought on solving day to day crises. A company might have intended to put up a play, but then Covid spikes and you have to cancel. They might’ve thought they had enough cash flow, but now the company has to let go of some of your staff. It never ends.

Today’s crisis of pandemic leadership means putting out many fires. A respected colleague recently said to me that they were ready to learn to live in discomfort because that is the job of an Artistic Director. They were not ready for the inability to ever rest. This is an essential distinction. There is a difference between choosing discomfort 9am-10pm Tuesday-Sunday – which is the job – and living in a state of constant emergency.

Eric Ting, who is currently stepping down from California Shakespeare Theater, speaks on being an Artistic Director through the pandemic in the SF Chronicle: “I’ve been using this metaphor: You’re running a sprint, and then you suddenly realize you’re in a marathon.”

When you’re a leader running at full speed, sustainability and self-care are out of the question.

Board Dysfunction and Artist Burnout

In 2020, I warned about the future of the industry without Artistic Directors: “Institutions are placing Executive Directors, or Executive Artistic Directors who have not been and never will be artists, at the helm of our institutions. Why would theatre, the conscience of the nation, give itself over to the same management structure as Amazon or the meatpacking industry?” This question still reverberates as we look at how much agency the non-profit system gives a board of directors. Especially when these boards are mostly professionals from other industries like law and finance.

The past two years have seen extraordinary infrastructural change in the theatre industry. Companies are learning to center anti-racism, reform their pay scales, create more humane rehearsal schedules. all while navigating mass death. There was an exodus from our field with the work stoppage that meant a lot of the support staff that Artistic Directors would rely on changed industries, or moved on to other companies that paid a better wage. We, the artists, demanded this necessary change. Boards, funders, and institutions were further behind and are failing to support leaders making these changes. Ken-Matt Martin speaks to it:

American theaters are not built to center the needs of the artists or the staff. They are top-heavy institutions that cater to donors’ preferences, that twist themselves into pretzels to fit foundations’ latest giving priorities, and that give boards composed of professionals from other fields ultimate sway over how theater is made. – Ken-Matt Martin, For Those Doing The Work

In 2021, Monty Cole wrote an article called The American Theater is Not Built For Us. In it, he outlines the origin story of the Theatre Communications Group, a national organization most theatres belong to that offers legitimacy in the field. TCG was founded with a $244,000 grant from the Ford Foundation in 1961.

In 1962, The Ford Foundation granted $6.1 million to nine repertory theatre companies: Actors Studio, New York; Actor’s Workshop, San Francisco; Alley Theatre, Houston; American Shakespeare Festival Theatre and Academy; Arena Stage, Washington, D.C.; Fred Miller Theatre, Milwaukee (now Milwaukee Rep); Mummers Theatre, Oklahoma City; Theatre Group, University of California Extension, Los Angeles; Tyrone Guthrie Theatre, Minneapolis. The 1962 Annual Report states, “The Foundation will assist groups capable of continued artistic development and of the attainment of a sustaining level of income from other sources within a reasonable period. The overall aim of the program is to help the participating theaters ultimately sustain themselves through box-office receipts.” The very foundation of the regional theatre movement, the American non-profit theatre and artistic development, was left in the hands of box office sales. While Ford’s initiative intended to support the artist, a company’s ability to sustain itself was reliant on commercial appeal. This is unsustainable in theatre. As any Development department will tell you, it takes way more than box office ticket sales to survive. Many theatre companies that aim to survive based off the wave of box office sales have seen their fiery end. The model that was handed to the Regional Theatre was doomed from the start without subsidies from the Federal government.” – Monty Cole, The American Theatre Was Not Built for Us.

At the end of the essay, Cole asks his readers who theatre companies are intended to serve. This question is also floated by Ken-Matt in his essay, when he challenges boards and funders to serve and center artists. It is a question artist-activists have been asking for decades.

Sitting in the complexity of what prevents us from doing our jobs is not where this conversation ought to end. I want to meditate on what Martin challenged us to do in his essay: “What if we truly embraced a spirit of abundance instead of reinforcing a culture of scarcity?” I write about an abundance mindset for arts leaders and theatres in part two – Resignation as Renewal: Visions for Artistic Leaders of Color.