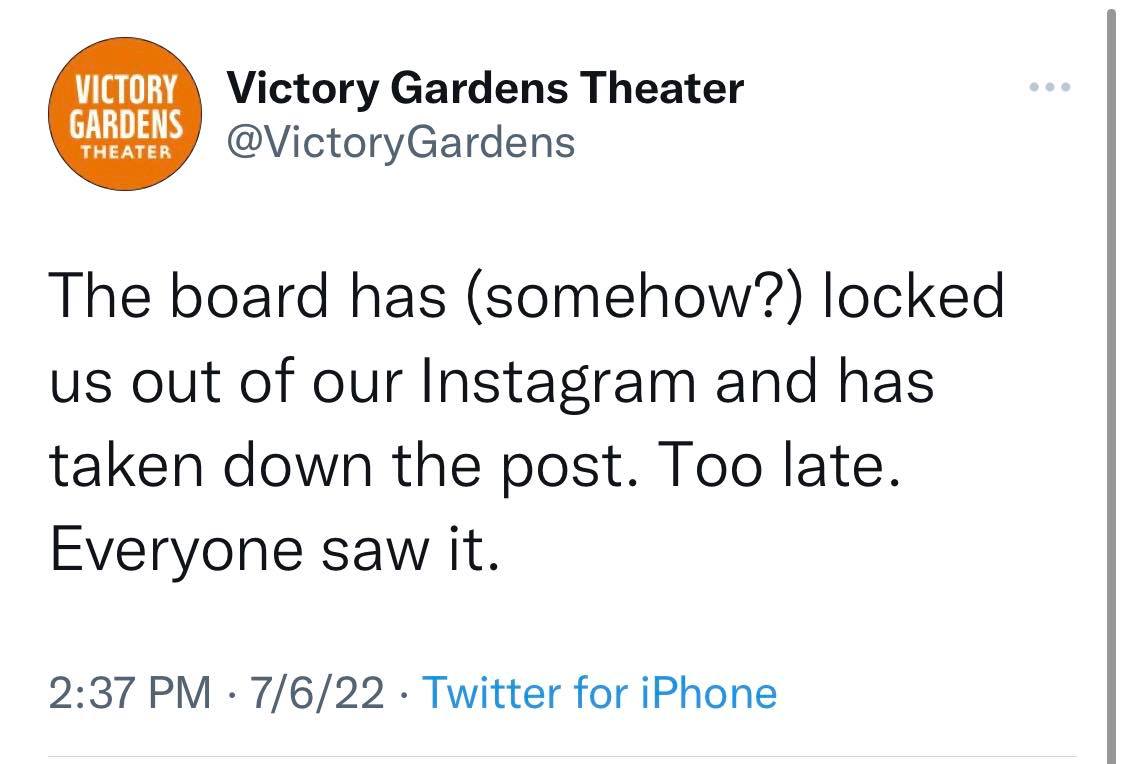 Since then, an anonymous source with knowledge of the situation has confirmed that the Victory Gardens board has gained access to the social media accounts for the company. The board has removed the post and blocked staff members from accessing the social media accounts. The marketing manager has also reportedly been removed from their staff google account, drive and email.

It is fair to assume that for now, any further communication from the social media accounts at Victory Gardens are not coming from the staff. To remedy this, the VG staff has started their own Twitter account you can follow for updates on the movement.

The silencing of the staff in this manner is truly concerning behavior on behalf of the board. The clear bias in the reporting around the staff’s show of solidarity by the Chicago Tribune equally so.

Chris Jones of the Chicago Tribune writes: “By Wednesday afternoon, the non-leadership staff of the theatre appeared to have taken the extraordinary step of taking over the company’s official Facebook page and Twitter account to criticize the theater’s own board of directors.” The board is referred to as a “volunteer board” rather than fiscal stakeholders that control the staffing and budget. According to the Tribune article, Board President claims artists and stakeholders were invited to board meetings. This is in direct contrast to the statement put out by the Resident Directors and Playwrights Ensemble:

“Furthermore, despite access to staff meetings, Board meetings, and Board committee meetings being guaranteed in writing by Victory Gardens in the agreements that we signed at the beginning of our terms as resident artists, we have been consistently shut out of meetings to discuss the issues outlined in this statement, such as the aforementioned real estate transaction and the failed hiring of Marissa Lynn Ford [Executive Director candidate].”

These contradictions, and the painting of the board as an innocent party should bother us deeply. Our most prominent theatre news sources is acting as gatekeeper and overseer, reinforcing the board/master’s power dynamics. See my previous article for Edgar Villanueva’s explanation of the resonances between philanthropy, and a plantation mindset.

Why is it extraordinary that the staff would criticize the board for doing not just a bad job, but a harmful one? The Board of Directors are not at risk here. The staff however, are real people whose jobs are on the line in the midst of a global pandemic. It is our job as journalists to defend our industry and its artists, not a board that is committed to stifling its growth.

Read the full text of the statement below, as well as a letter that the staff sent to the Board of Directors on June 16 that never received a response.

We, the 9 remaining full-time staff members at Victory Gardens Theater, in solidarity with the Resident Artists, demand the immediate resignation of the Board of Directors and the reinstatement of Ken-Matt Martin as Artistic Director.

The board repeatedly ignores the advice and concerns of the arts professionals on staff. As staff members, we have been told to channel all communication through Artistic Director Ken-Matt Martin, and Acting Managing Director Roxanna Connor – but the board has repeatedly undermined and dismissed them. The board hired Ken-Matt and Roxanna to lead this organization yet they have never truly been allowed to do so.

The Board’s acquisition of additional property, while fully ignoring and exacerbating the maintenance chronically impacting our current structure, demonstrates a failure to uphold this institution’s mission and artistic goals.

The search for an Executive Director was announced in November 2021.
In February 2022, we had our final interviews with 3 candidates.
We remain without an ED and since then have lost 7 staff members, none of whom have been replaced.

The ED search has officially failed.

Pre-pandemic, we had 22 full-time staff members plus interns. Now only 9 remain.

Whatever happens in this moment, we remain in full support of the cast and crew of our current production, cullud wattah.

There is no other path forward. We have lost confidence in the Board of Directors to govern this organization in alignment with our mission. The Victory Gardens Theater Board of Directors must resign. Ken-Matt Martin must be reinstated as Artistic Director.

Victory Gardens Theater Staff Letter to the Board, June 16, 2022. There has no response from the board to this e-mail as of publication of this piece.

This is a letter collaboratively written by the entire remaining team of full-time staff, excluding the Artistic Director and Acting Managing Director, of which there are now only nine members. We are writing, to express our deepest worry and convey our strongest pleas of urgency to put Marissa Lynn Ford in place as Executive Director immediately.

It has been over two years since Victory Gardens has had an Executive Director. We appreciate the thoroughness and feedback built into the search process; but as we have waited eagerly for the search to conclude, we have been told week after week that negotiations are still underway. In the meantime, our ability to put plans for next season in place–or to support our current projects–is being severely hampered by the lack of a permanent Executive Director. We are unable to move forward with the long-term hiring, contracting, and strategic planning that we can only undertake responsively with a full leadership team in place, and in the meantime, we are struggling to manage a workload designed for a full staff with the employees who remain.

All of us, especially Ken-Matt and Roxanna, have taken on multiple jobs for the last several months, and the load has not been sustainable. Since the final all-staff interview of ED candidates four months ago, on February 25th, 2022, we have lost six staff members: Director of Finance, Director of Marketing and Communication, Interim Director of Development, Business Manager, Community/Education Associate, and Facilities Manager. Since returning from the shutdown, we have not replaced our Group Sales Manager, Community Engagement Manager, Director of Production, Artistic Programs Manager/Associate Producer, and Institutional Giving Manager, among others. A staff that was formerly 22 full-time employees, with several interns, is now 11.

As we continue to wait for the Executive Director role to be filled, we lose more and more staff members, leaving those of us who remain to take on even more responsibilities–making the workload less and less sustainable and prompting further burnouts and resignations. Even before the pandemic, VG’s staff struggled to support the massive programming load, which was unusually busy for a staff of our size, and had a local reputation for staff burnout. We’re greatly encouraged by the approval of a pay equity plan and by a willingness to reconsider our institutional capacity; but without a permanent leadership team in place to rebuild the staff, an increase in pay will not make up for the mounting growth of responsibilities that now confronts us.

We write to you because we believe in this theater, in its mission, and in its potential–but we’re quickly burning out while we wait on the foundation that will let us rebuild. Every decision is waiting on Marissa Lynn Ford to be in place. Please help us keep Victory Gardens going.