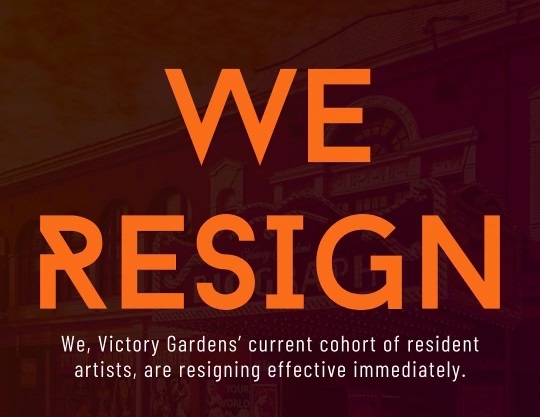 If you’ve been an artist or a fan of the Chicago Theatre scene, that probably gave you déjà vu. On May 22, 2020, the Playwrights Ensemble resigned in protest of Erica Daniels’ appointment as Executive Artistic Director (formerly associated with Profiles Theatre and Second City). This protest peaked when Victory Gardens infamously boarded its doors and windows and failed to support Black lives during the George Floyd protests.

The issues were much the same as they are now: a lack of transparency on the boards behalf with their artistic stakeholders and patrons. Erica’s appointment was done without consulting resident artists and stakeholders, just like this leadership shift they are attempting now.

We cannot allow a board to push out Martin and Connor, two incredible artists who have resurrected this theater when no one thought it was possible. It creates a dangerous precedent for black artistic directors across the country, and as the letter points out Martin is one of few Black men to hold an Artistic Director position of this magnitude. How many of us, myself included, were put in place during the pandemic as crisis leaders? Now that the crisis is coming to an end this board seems to think its leaders of color are disposable.

This is no surprise given the plantation-like structure of philanthropy as named by Edgar Villanueva in Decolonizing Wealth: indigenous wisdom to heal divides and restore balance. In his book, he alleges that boards play the role of plantation masters:

“The people with the least power are those seeking funding — the field hands: begging for scraps, given no dignity and treated with no respect. One step up, people of color working in philanthropy are the house slaves.. Then there are the overseers, usually a white man, but occasionally a slave promoted to the position. Granted, they are in a tough position, under pressure from the master to squeeze as much profit from the slaves as possible…”

Apply this passage to Victory Gardens, where Ken-Matt Martin and Roxanna Connor have been expected to reinvent the company and squeeze out profit without proper support. Pre-pandemic, the theatre had a full time staff of twenty-two artists, and now only has a staff of nine. This is just a small example of the types of internal sabotage and resource starvation that Black and brown leaders face when taking on historically white companies.

As a Black artistic director of one of the Resident companies, Sideshow Theatre, I am terrified. We may be facing displacement ourselves, as we rapidly approach our first in-person production since 2019. This board does not understand the role that Victory gardens plays in the ecosystem of Chicago theater, and this is why they are unfit to govern it. Victory Gardens is a home for black and brown artists and audiences alike, and the development of new plays by its resident artists and companies. Victory Gardens plays an essential role in the national pipeline for aspiring and established artists of color. It is hard not to feel like the board thinks that they are the masters of our work, and our right to the space, able to do with it what they please.

We have just barely recovered from the first mass resignation. In 2020, the Ignition Festival Playwrights resigned and pulled all of their plays from the festival. I personally met with The ignition Festival Playwrights, some of whom gave up opportunities that they had never had before in their careers in an effort to help these displaced writers find new homes for their plays. Myself, Ian Martin (Haven theatre), and Kaiser Ahmed (Jackalope) were trying to coordinate a brand new storefront festival to hold their pieces. In a pandemic. Black and brown leaders the ones who are left to attempt to band aid the mistakes of funders that do not care about us. We are tired of being pawns in this boards political game. 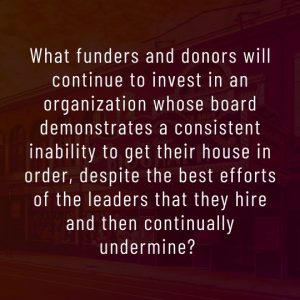 This is a clear message from the Chicago theater community and the artists with the most investment in the institution. The Resident Directors and Playwrights Ensemble are calling for the resignation of the board of Victory Gardens. It is time for the Theatre community as a whole to recognize that without investment in black and brown art, it will not be possible to continue business as usual.

It breaks my heart that this is happening during the transcendent run of Cullud Wattah, a show created and performed by Black women about the poison water crisis in Flint, Michigan. The theater should not be able to profit off of the labor of black women, but this show needs to be seen. The timing sends the message that the board does not care about Black people. Perhaps to demonstrate their goodwill they should donate all remaining proceeds to the Black community of Flint Michigan, and their efforts to restore their community’s health and obtain justice.

We are done being disposable. It is time for us to not only to consider the resignation of this board, but the resignation of the board system at large. It does not serve black and brown leaders to be policed by people with fiscal interest and control. We are greater, and more equipped to run our institutions for ourselves, than those who would like to be our masters.

Bias Alert: Regina Victor is the Artistic Director of Sideshow Theatre, in Residence at Victory Gardens.