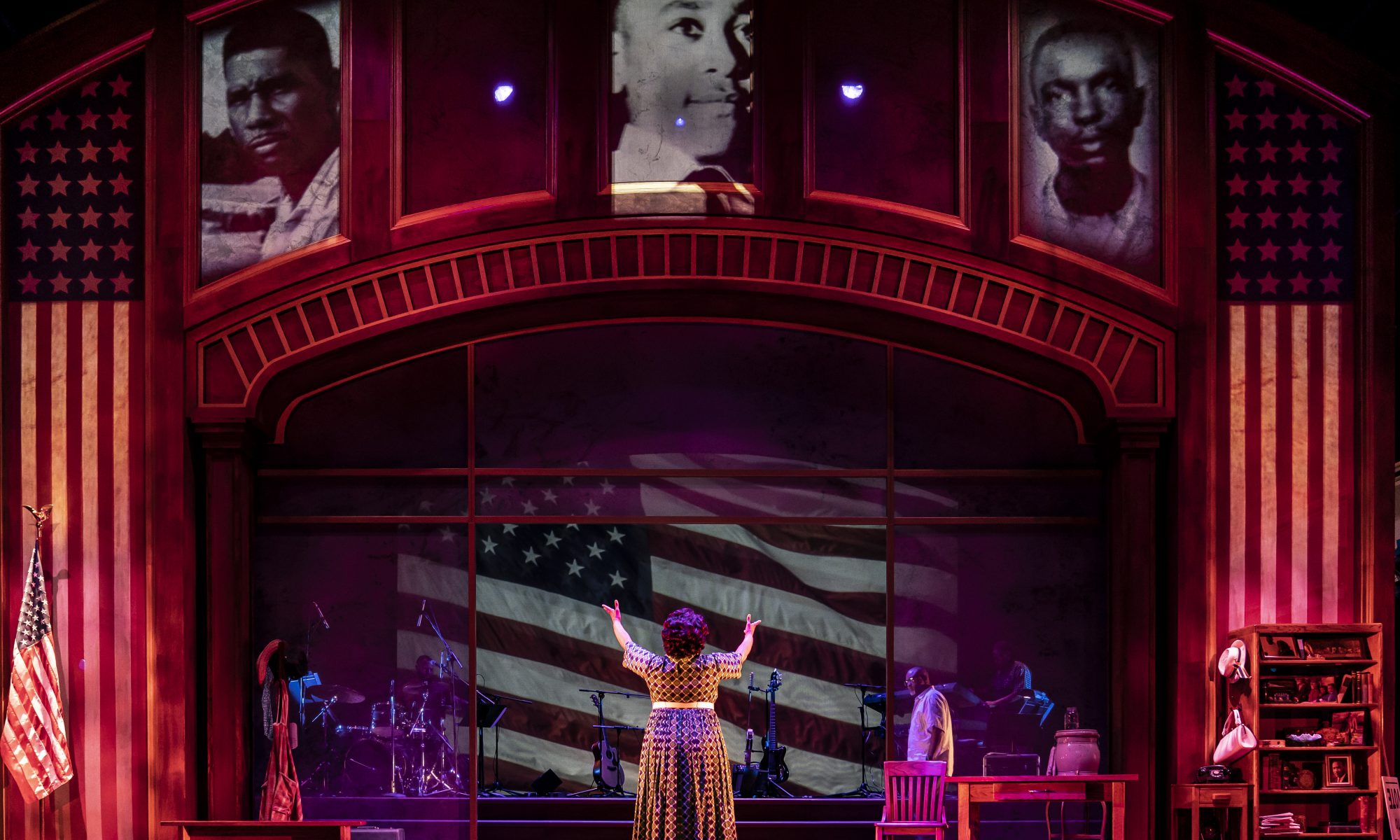 The play begins with a mic being ripped away from Hamer as she addresses delegates at the 1964 Democratic National Convention, and then proceeds to transcend time and space to travel the peaks and valleys of her trauma, as well as her experiences as a black woman and activist in the Jim Crow South.

Though the original traveling production featured very little other than a mic center stage and the natural atmosphere of the local parks, the homecoming production makes good use of the sleek grandness of the Owen Theatre. Director Henry Godinez tastefully weaves together civil rights images and stylized movement, while music director Felton Offard constructs a score of black spirituals to elevate this hero’s journey to epic proportions. Much like Hamer exclaims herself, the directing style does not shy away from very openly showing the audience “what it is and how it is.”

If I was to liken this production to a very well oiled machine, it must be said that E. Faye Butler is the steady motor propelling it forward. Broad and bold in manner and speech, Butler is a titan of epic proportions. She holds her audience with the same firm grip that the likes of Martin Luther King and Rosa Parks used as they defiantly walked hand in hand from Selma to Montgomery in protest. Butler wears the deep despair and bountiful joy of Hamer’s life like a registered voter sticker displayed proudly upon the chest. Her voice reverberates to the back of the theatre and sends waves of raw emotion through the audience time and time again. Through her portrayal it is clear that black trauma is a continuum, and the strange fruits of the civil rights movement were watered by the tears of those gone too soon. Medgar Evers, Emmet Till, James Chaney, Andrew Goodman, Michael Schwerner… we speak your names.

Anna Deveare Smith, a dramatist and activist known for her documentation and portrayal of black life on stage, has stated that she hopes the effect of her work encourages audiences to ask “What can be done?” as opposed to lingering in the black hole of shock and helplessness.

Fannie (The Music and Life of Fannie Lou Hamer) is a reminder of the weary road we have trod together as Americans in our search for equality. Though Hamer died at age 59, it was clear that there was much more she wished to see done. If Hamer were alive today (and through E. Faye Butler she very well is) there is no doubt what her response would be to those who may find themselves asking “What can be done?”

She would certainly say “Vote!” and “Don’t you let nobody turn you around.”

Fannie (The Music and LIfe of Fannie Lou Hamer) runs at the Goodman Theatre thru Nov 21st.