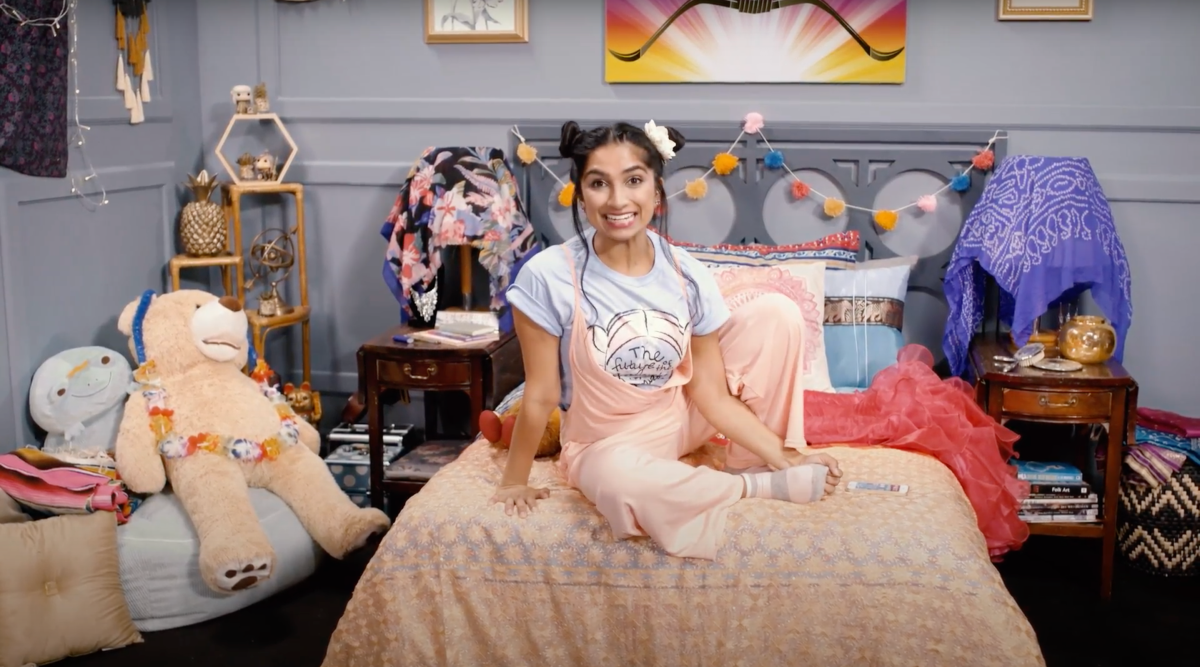 While each performance uses Jadhwani’s same script, director Dutt has created a different production for each of the three actors, each with a unique design and concept. For example, the style and aesthetic of Amar Chitra Sita (Minita Gandhi) draws inspiration from the work of famed Indian comic book publisher, Amar Chitra Katha. Sita’s Slumber Party production, on the other hand, is set entirely within the bedroom of a teenage Sita (Nikita Chaudhry), who playfully acts out the epic using stuffed toys and various objects as her props. I watched Sheetal Gandhi perform in Sita’s Mehndi Party, whose aesthetic was inspired by mehndi, the art of using henna paste to decorate one’s body.

Sheetal Gandhi easily commands attention with her warm, buoyant energy, slipping effortlessly into various distinct characters—from Sita’s prissy younger sister Urmila, to proud prince Ram, to Sita’s wizened old mother. In her blocking, Dutt makes the most of Gandhi’s training as a movement artist, staging scenes in ways that feel as though there are two characters on stage. Appropriate to the play’s mythological source material, the style of acting seems to draw from the heightened emotions and exaggerated characters of children’s theatre.

Although her characters use informal, contemporary language, Jadhwani follows the Ramayana faithfully. By exploring the themes of the Ramayana from Sita’s perspective, the playwright highlights Sita’s patience and loyalty. Sita’s point of view also gives the script room to explore the price Sita pays to keep her marriage afloat; the dignity she sacrifices to live up to her culture and her husband’s idealized vision of womanhood. It feels almost misleading that the show is marketed as a breakup piece, when Sita loses not just a boyfriend, but Ram’s lifelong promise of equality and companionship.

At moments, the casual language of Jadhwani’s script feels slightly out of sorts with the play’s setting. Sita describes one of her suitors as a “fratty dude” and mimics him mansplaining to the other suitors that they need to “lift from your legs” to string Shiva’s bow. But as the show progressed I began to appreciate Jadhwani’s scattered use of slang to bring the audience into Sita’s world. She attains the same effect by skillfully incorporating explanations of South Asian traditions and legends, bridging the potential gap between the audience’s knowledge and the rich context of the epic.

In tandem, art designers Neha Assar and Aki Ruiz — as well as costume designer, Ashphrod Jacoway — create a visual experience of lush colors and repeating patterns. The fanciful, green-screened backgrounds hint at setting without becoming distracting. At key moments, smaller images, which are embedded into the interlocking patterns of each background, appear and are cast large on the screen. These visual aids are helpful tools to highlight key characters or objects — such as Sita’s unborn twins or Ravan and his many heads.

The quality of the production itself speaks to how far Zoom theatre has come since the beginning of the pandemic. The skillfully edited, pre-recorded production strikes a delicate balance between film and theatre. While the Sitayana does cut between two cameras and employ a green-screen, the film elements are used sparingly, only to augment the scene at hand. The result is that the recording preserves the feeling of a fixed theatrical space, and centers Sheetal Gandhi’s captivating storytelling.

Dutt and her artistic team are also able to find refreshing new opportunities in the streaming space, making use of elements unique to an online performance. I had the option of taking a pre-show quiz to see which Sita best reflected my personality (Slumber Party Sita, just in case anybody was wondering) and was able to peruse a helpful study guide to refresh myself on Sita’s family tree and some of the Sanskrit vocabulary Sita uses.

I also want to commend the three production partners for taking accessibility into account when designing their production—both in terms of design and material. ASL and captioned versions of each production are available, and the recording can be paused and resumed just in case you need to use the bathroom, let your dog out, etc.

From the standpoint of the script’s material, the illustrated study guide which accompanies the program provides invaluable cultural context about the Ramayana for viewers like me who were not as familiar with the epic’s tradition. While Jadhwani’s script stands solidly on its own merits and (as mentioned before) seamlessly eases viewers into Sita’s world without the use of the guide, the well-researched aid allowed me to better appreciate the depth of tradition and artistry at work.

The Sitayana is an uplifting story of an unsung heroine, and a piece of virtual theatre whose technical prowess shows just what leaps the form has made in the past year and a half.

‘The Sitayana (Or, How to Make an Exit)’ is available online through October 17th.