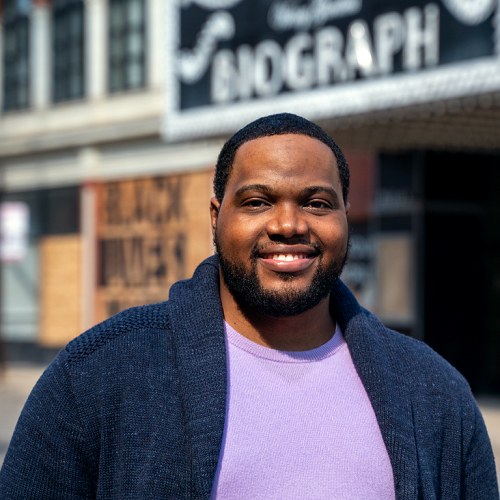 Victory Gardens has had an extraordinary year, beginning with the planned departure of Chay Yew, followed by the sudden internal appointment of then-Executive Artistic Director Erica Daniels. After a series of letters and protests, Daniels was ousted from her position, and former board President Steve Miller has stepped down from the board, leaving many to wonder what was to come. When asked where does the healing begin, Martin wisely grasps that to heal, you must first know what you are healing. “I want to take the time to make people feel like they are actually listened to, and not just as a platitude, I want to get into some discourse, I want to build some meaningful relationships I want to understand what you’re angry about, what you’re passionate about what you’re most excited about, what you’re most scared of, what you are the most joyous about. That only informs how to better figure out the programming that needs to happen for the future.” Martin acknowledges this is just the first step, but that the center of the action is accessibility to executive leadership, and leading with transparency and generosity.”

Since last summer, VG has appointed Charles E. Harris as their board president, and Roxanna Conner, who headed the department of education at VG before being appointed Acting Managing Director. This means the entire executive leadership is Black. “Just because there’s Black leadership.. Does not mean that antiblackness ceases to exist. This is an exciting time I think in this city, and across the nation in terms of seeing different representations of artists of color and leaders of color in particular. But that does not mean that these institutions are automatically absolved, right of their own complicity that they may have had in the past as it relates to any myriad of issues from gender equality to racism and upholding white supremacist principles within the ways they are working. Alongside a myriad of other things, like how are you making yourself more accessible. Even when I was running Pyramid which happened to prioritize Black artists by design by our mission, we were always looking at how do we make this the most accessible theatre possible?”

Access is and has been a staple of Victory Garden’s values, and is a value within Ken-Matt Martin’s artistry as well. Since moving to Chicago he has joined the board of Season of Concern. He is also a consultant and an anti-racism facilitator for other major institutions including Arkansas Repertory, Design Action, and New York City Center. Chicago has no problem advocating for itself, but Martin’s leadership style as a passionate advocate, tempered facilitator, and champion of those who are often ignored, will be a welcome addition to our artist-activist landscape.

In our extended interview with Ken-Matt Martin that we’ll publish next week, we will dive deeper into what drives Ken-Matt Martin the artist, his activism, his aesthetics, and his boundless advocacy for indigenous, Black, and POC artists. Keep an eye on Rescripted for the full piece next week!

Rescripted is a community-funded publication, and we are grateful for your support. If you’d like to support arts criticism like this, consider subscribing to our Patreon by clicking this link.

Bias Alert: Regina Victor was assistant director on Graveyard Shift at The Goodman during Martin’s tenure as Associate Producer.