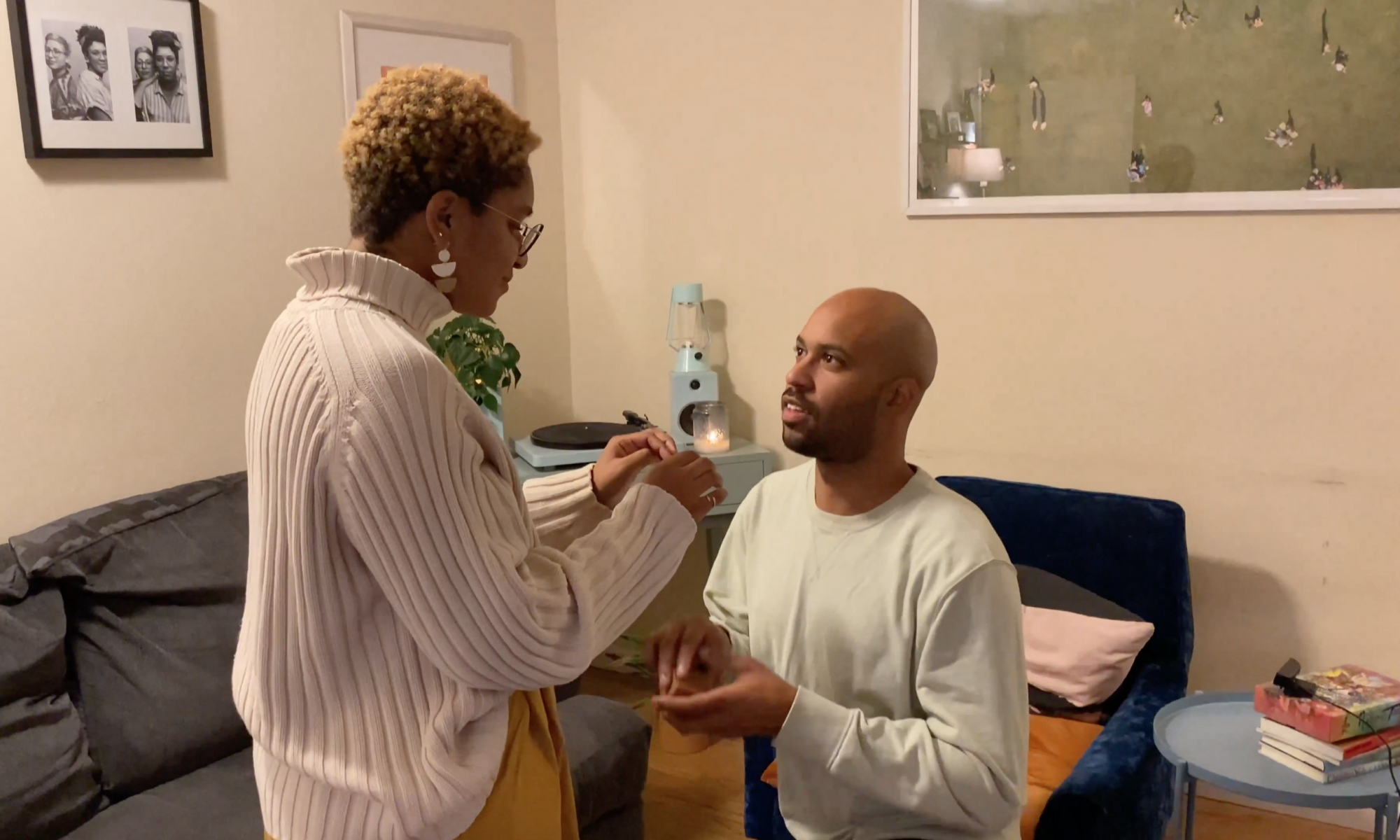 Couples in close quarters have been a hallmark of the cultural discussion during the pandemic, and this multi-camera production showcases all the awkward, tender, and aggravating instances that can occur when two people are packed together. The cameras capture video from multiple angles throughout the apartment, playing with both wide and tight perspectives. Some frames are shot with clear visibility of both performers. Others catch a glimpse over the shoulder or in a reflection. This dynamic cinematography leans into the intimacy of the location. It’s not just a set: it’s their home and we are not invited in. Split screens and hazy filters elevate moments of emotional intensity, whether it be a romantic embrace or a newly developed rift. These breakaway elements provide visual variation and playful theatricality that is sometimes missing from digital theatre.

Technical issues were few and far between, and no more than one would expect from a remote streaming experience. Leanna Keyes, Streaming Producer, and Heather Kelly-Laws, Stage Manager, conduct the feed expertly. Low-fi music, incorporated by sound designer Elton Bradman, cleverly plays into the fuzzy audio-quality associated with streaming. Occasional instances of audio clipping occur when the performers raise their voices to a shout. While these rare distortions make it difficult to hear the text, the alarming intensity overpowers the visual elements and this jolt adds more to the production than it takes away. Viewing The Light on YouTube was wonderful because I could cast on my TV rather than watching from my computer. It was nice to watch in an at-home environment that didn’t feel like I was in a team meeting. If you have a casting device, I recommend it.

Chicago-born playwright, attorney, and theatre journalist, Loy A. Webb presents a loving partnership that falls victim to patriarchal power in just over an hour. The text is loving, comfortable, and then suddenly turbulent. The destabilizing shift in tone shakes the foundation of the script. Webb’s ability to heighten the stakes every few minutes generates a momentum that pulls me closer to the screen. Leigh Rondon-Davis and Kenny Scott balance humor, love, and rage for a tragically tender performance. The two ricochet against tight frames, falling into each other with precise choreography. The calculated staging in service of multi-camera streaming limits natural discoveries for both the actors and audiences, but this consequence of the digital theatre era is difficult to avoid.

In addition to a transition from stage to screen acting, the concept for this production layers multiple hurdles that the two actors must overcome. Anyone working remotely has experienced a blurring between the workplace and home, making it difficult to leave job-related stresses at the door. This is doubly true for actors performing from home, since such work definitionally involves intense emotional labor. The fact that the actors are playing opposite their significant other blurs the line even further. Leigh Rondon-Davis and Kenny Scott navigate a minefield of emotional distress and racial/sexual trauma for faceless, soundless audiences peering into their apartment. As I consider the weight of this project and what is being asked of these performers, I pray that they have found a way to decompress. It is an amazing feat they are taking on, for the preservation of an art form and in support of a powerful text. That alone deserves a standing ovation.

The Light is 70-minutes and runs from December 4 to December 13.