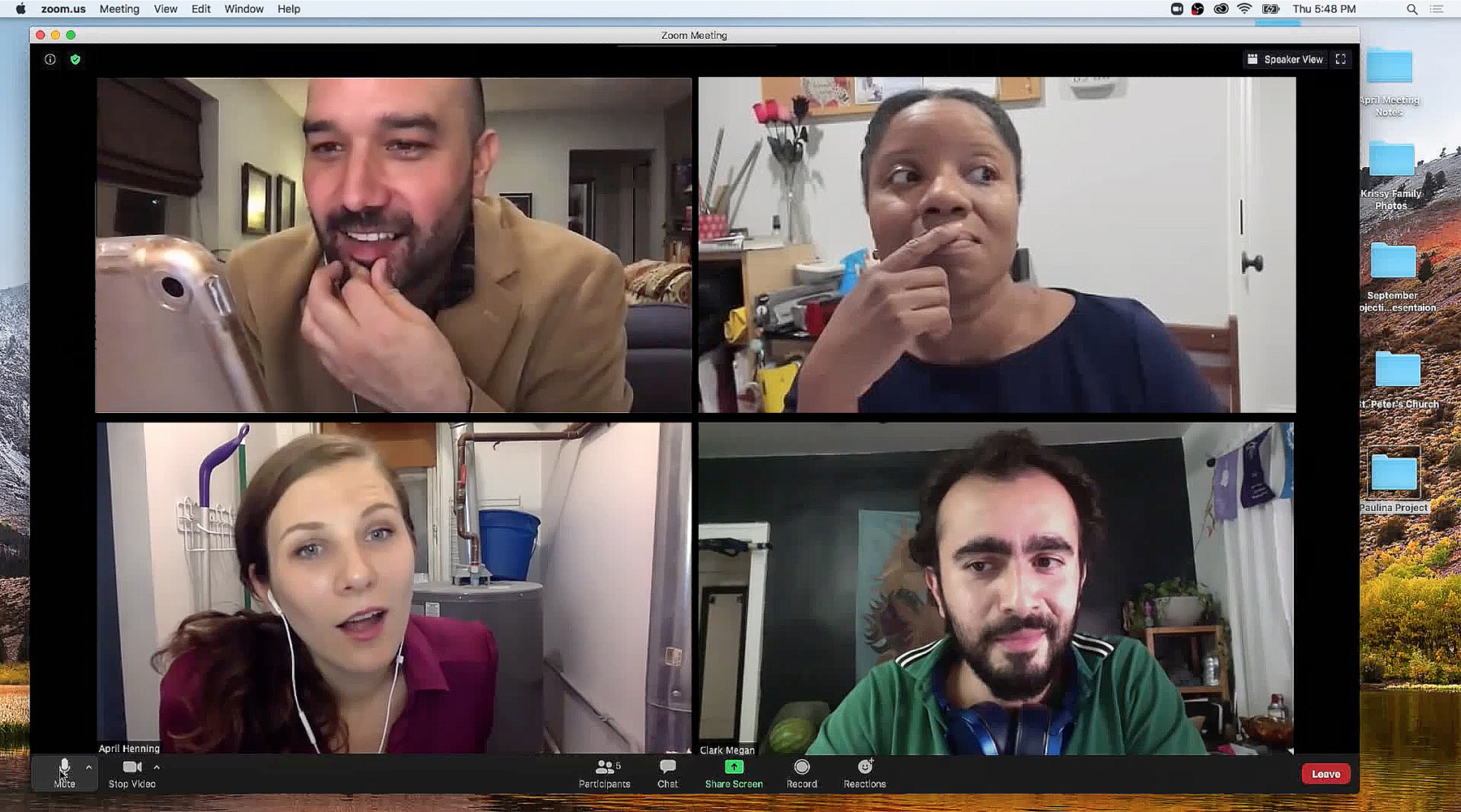 The actors do incredible work keeping their performances grounded and understated, and the cast has an electric chemistry, despite having to give nine different performances in nine different rooms. Director and playwright Spenser Davis achieves this by smartly utilizing the actors’ individual spaces, having them walk around and away from the camera, eat, change locations, and interact with props. This gives the proceedings just enough verisimilitude that the script absolutely soars. The dialogue here is both clever and grounded, and it hums along at a breakneck pace that is perfect for the building and release of tension.

Since The Spin skews mostly comedic, when dark turns come they are unexpected, shocking, and devastating. At the start, we the audience aren’t quite sure what our heroes’ jobs actually are. At first, the dialogue makes it seem like they might be lawyers or campaign managers; the reveal that they’re publicists is very gradual. It makes for an exquisite gut punch as we slowly unpeel the evil of what they do, because we’ve fallen in love with the characters so quickly.

Matthew Martinez Hannon, as Lorne, binds the cast together like glue, interacting and clashing with nearly every character. Hannon plays Lorne as well-meaning but irascible, his many jokes and barbs masking an unexpected emotional intelligence. Salar Ardebili is wildly hilarious as Clark, the awkward and incompetent (but nonetheless lovable) rich kid who doesn’t quite know what he’s doing. Clark is that coworker in the Zoom meeting who is literally always eating, goes to the bathroom without turning off his microphone, and is very clearly letting his hygiene slide in quarantine. Sarah Gise is eminently likable as April, projecting a sense of competence and professionalism that is easy to admire. Laura Berner Taylor is delightfully nasty as KC, the Mayor’s assistant with a twisted moral compass.

It is Elana Elyce as Dierdre who shines the most here, as the central themes of the show are threaded through her. Are we responsible for the actions of those close to us? Are moral decisions possible in a world that requires us to stoop to immorality to survive? These are illuminated through Dierdre’s mostly unspoken struggle to contain her feelings of betrayal and guilt. Elyce conveys this brilliantly; through her body language we see her stuffing those emotions down in order to focus completely on the task at hand, to project an air of professionalism and poise. It is especially fascinating to watch Dierdre conflict with Lorne over this, as he tries to get her to open up about her emotions mere minutes before their client logs into the call.

The real meat of the show comes from watching likable characters do an excellent job at being patently evil, and then seeing the toll this takes on them. It’s a delicious paradox to chew on. As we watch them defend the rich and the well-connected from harm, all the while manipulating the online narrative about the issue, it makes one reconsider the narratives we are fed in real life. I see a great deal of angst about the sad state of the news media, the dysfunctional and cruel state of politics. The point that The Spin seems to make is that none of these things are born out of chaos. Things are this way because they are profitable, because people like this have found a way to pay the rent with it. It’s simple to believe that politics and the internet are unbearable because humans are trash, but the truth is both more hopeful and more dark. These things vie for your attention, and aim to make you anxious and depressed, because capitalism has learned how to monetize our emotions.

The Spin gives us a glimpse into the lives of the benefactors of this system not as a way of damning them, but as a way of affording us clarity from the systems we’re all trapped inside. At one point, Lorne jokes about keeping things “between you, me, and the FBI agent who’s probably listening in,” itself a line that reinforces the theme of feeling stuck inside a system. But in embracing that contrast between the real and the theatrical, the likable and the evil, The Spin invites us to become that FBI agent. To listen in, and gain valuable perspective from a distance.

For all its effectiveness, however, there are several elements that make The Spin feel like the excellent Act One of a two-act play. Things like the conflict between Lorne and Clark, which is masterfully handled but doesn’t appear to resolve by the end. Things like the entire character of April, who is presented as competent, cool, and funny (bolstered by Gise’s charming performance) but doesn’t have much of an arc. Things like the play ending on a shocking cliffhanger that would have massive consequences for all our characters’ personal and professional lives moving forward, consequences that I desperately want to see firsthand. None of this is a criticism exactly; more of a genuine plea for a sequel. I understand wanting to keep Zoom shows short and sweet in this very experimental era, to test the waters before making us watch a two-hour play in a medium that’s really only seven months old. But if The Spin has proved anything, it’s that the folks at Interrobang are definitely up to the challenge.

The Spin will stream on BroadwayWorld until November 22nd.