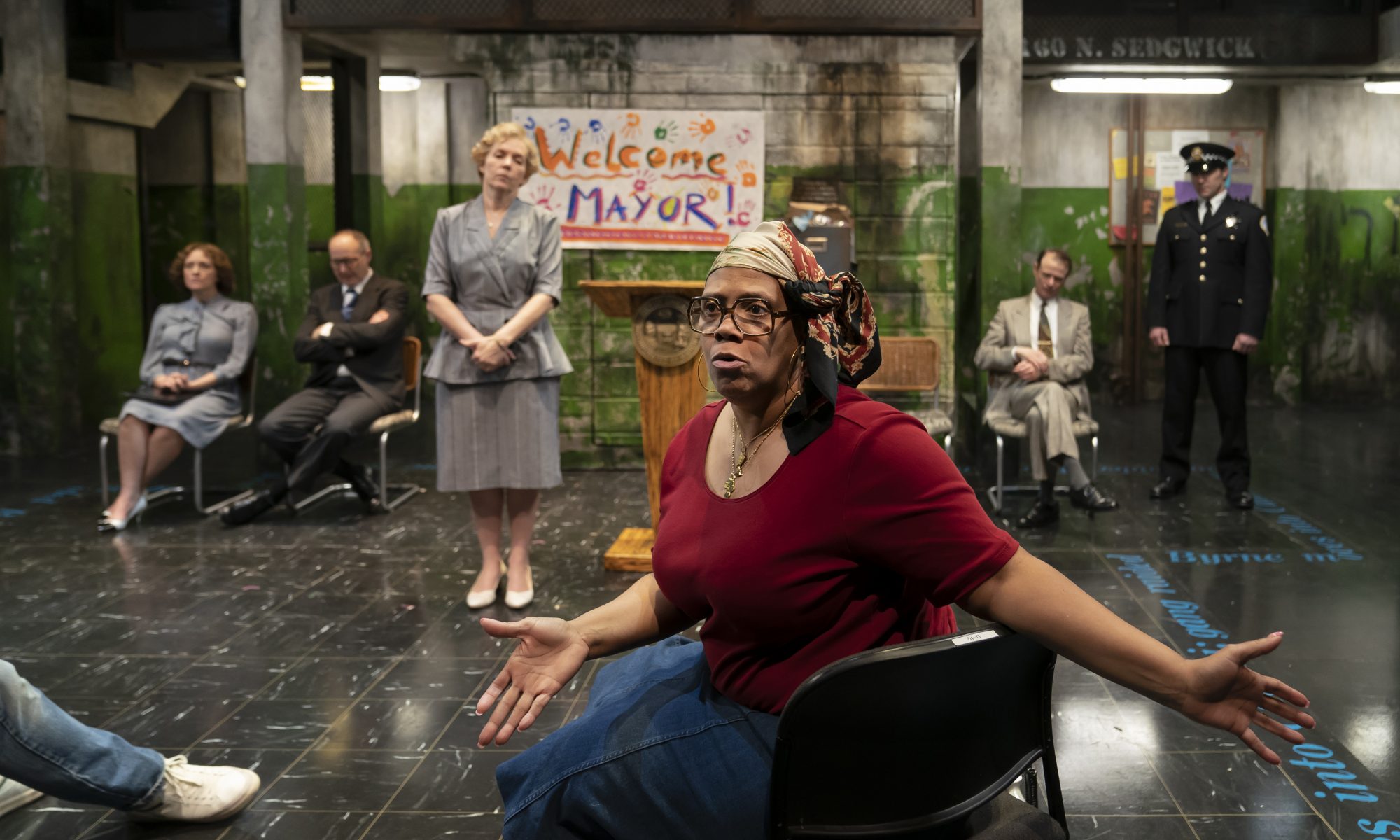 In the spring of 1981, Jane Byrne, the first female mayor of Chicago, moved into an apartment in Cabrini-Green — a public housing community just northwest of the Loop. The purpose of the gesture was to demonstrate her willingness to help fix the many problems plaguing the area, which included gang violence, poverty, and untenable living conditions. But to her surprise, inhabitants of Cabrini-Green were nonplussed and even angry at her presence, perceiving it as an empty publicity stunt. Though her presence did bring some attention to important issues, as well as a crackdown on crime and some updates to broken infrastructure, there were side effects. More police in the area meant that gang violence was often simply replaced with police violence. Families were evicted from apartments for minor misdemeanors.

After a disastrous neighborhood Easter celebration, spearheaded by Byrne and disrupted by protestors, Byrne moved out of the neighborhood after living there for only three weeks.

This is the story that playwright and director J. Nicole Brooks has chosen to tackle in Her Honor Jane Byrne at Lookingglass Theatre. This is a story that encompasses themes of race, class, white savior narratives, and the many ways the state goes out of its way to enforce poverty in black communities. It’s a screamingly necessary show, executed masterfully — but the most sobering thing about it is how grounded it feels in its current time and place. When you walk out of Water Tower place after the show, you can keep walking northwest for half an hour and arrive at the very spot where the Cabrini-Green buildings stood, before they were demolished in 2010. And if you look around, you can see how utterly gentrified the location is, and how spectacularly Byrne’s experiment failed. Of course, the residents of Cabrini-Green didn’t just disappear; they mostly relocated to the South and West Sides, where the wealthy residents of downtown Chicago didn’t have to look at them anymore. Her Honor Jane Byrne makes you look at them; it forces you to listen to their stories, and to consider how white compassion is often shaped by white privilege.

The set, from designer Yu Shibagaki, transforms the large Lookingglass space into a rundown community center, complete with flyers tacked to billboards and peeling green paint. Hovering above the stage is a balcony covered with chain-link fence, creating a feeling of both dizzying height and restrictive enclosure.

All up and down the stage wall is an assortment of old Cathode-Ray televisions. Screens and projections in theatre are very difficult to pull off; if too much action takes place onscreen, one begins to wonder why we’re not just watching a movie. Smartly, the director and projection designer (Rasean Davonte Johnson) have made sure to always incorporate the video elements into the live elements onstage — whether by using more abstract images to reflect a character’s emotional state, or by incorporating actual television broadcasts and commercials from the 80’s to ground the play in its time period. In one particularly effective scene, Jane watches a television interview about her recent exploits. As the interview grows more heated and impassioned, the image grows distorted and spreads across the screens. The characters eventually break through onto the stage wearing the exact same costumes as in the video, and continue the interview. It’s a moving way to visualize how the criticism from the community is affecting Jane, growing more powerful and harder to ignore.

Smartly, Brooks (both in the text and with her direction) paints Jane Byrne (Christine Mary Dunford) as a sympathetic figure, sincere in her intention to better the lives of those in Cabrini-Green. Dunford plays Jane with a tremendously relatable air; fierce enough to hold her own in arguments with corrupt city officials, but with enough wit to remain engaging, and enough warmth to give us an emotional throughline to follow. In a delightful running gag, Jane claims repeatedly that she’s trying to quit smoking, only to light up a cigarette in nearly every scene. The likability factor is important, as it makes it all the more cringe-inducing when she missteps.

The most heartwarming subplot here involves Jane becoming friends with Tiger (Nicole Michelle Haskins), a teenage girl growing up in Cabrini Green who loses her job after getting stuck in a broken elevator in her building. Jane helps Tiger get her job back, and they strike up an unlikely friendship. Haskins plays Tiger with a delightful deadpan straightness. She is responsible for the show’s funniest moments, as she reacts to Jane with quiet, straightforward jokes that undercut the Mayor’s serious manner. Watching the two of them is when you feel the severity and size of the racial/socioeconomic divide they’re trying to bridge. The best moment of the entire show comes when Tiger offers Jane a cigarette. Jane accepts, saying “Some role model I am,” and Tiger responds “You’re not my role model.” It’s a funny yet subtle exchange that underlines the fact that despite her well-meaning, liberal magnanimity, Jane still sees herself as superior to the people she’s moved in with, however subconsciously. At the end of the scene, Jane, still trying to be the role model, says “Tiger, I want you to stop smoking.” Tiger pauses, and says “You stop smoking.”

Jane’s character is positioned in direct contrast to her foil, Marion Stamps — a real-life Black activist who was extremely critical of Byrne’s move to Cabrini-Green, played here with a delightful ferocity by Taron Patton. Patton brings an electrifying energy to every scene she’s in, crystallizing for the audience an empowering feeling of inexhaustible, righteous anger. It is in her dialogue that we see the central contrast of the plot most clearly illustrated; the mostly white city officials and police officers (Frank Nall, Josh Odor, Thomas J. Cox) place a great deal of emphasis throughout on politeness and civility. And while there’s nothing wrong with politeness or civility in a vacuum, it’s easy to see why Marion has neither the time nor patience for either, as she clearly and cleverly explains the problems her community faces and the ways Mayor Byrne is failing to solve them.

So which is the better approach? Marion’s electrifying anger, or Jane’s civil attempts at even-handedness? Well, the best thing about Her Honor Jane Byrne is that it refuses to give us a satisfying answer. Here, politeness is clearly coded as white, and anger is coded as black — and the problem with white politeness is that it has a long history as a tool for black subjugation. Practices like redlining and segregation are often characterized by thin veneers of civility, and so when white people try to present solutions to these problems with that same veneer? That is understandably infuriating. Meanwhile, the play seems to argue that the problem with black anger (and of course it’s angering that this is even a problem) is that it will never convince or win over the white people already in power. In the most painful scene in the play, Marion and Jane attempt to have a conversation in the Mayor’s office about how to address certain problems — but Jane’s overly civil conduct makes Marion feel condescended to, and Marion’s cutting rage makes Jane feel as though any proposed solutions are unwelcome.

Despite the tragedy, however — despite the wide political gulf that none of the characters are able to bridge — Her Honor Jane Byrne does not feel pessimistic. Instead, it feels like a scientist; it meticulously combs through many different attitudes and viewpoints on institutional racism, and presents them without judgment or condescension. And yet it avoids becoming too academic or detached; there are plenty of moments of fun, of joy, and of reprieve, such that you walk out of the theatre feeling both entertained and educated.

For more reading about Jane Byrne and Cabrini-Green, I highly suggest this Chicago Magazine article from 2018.