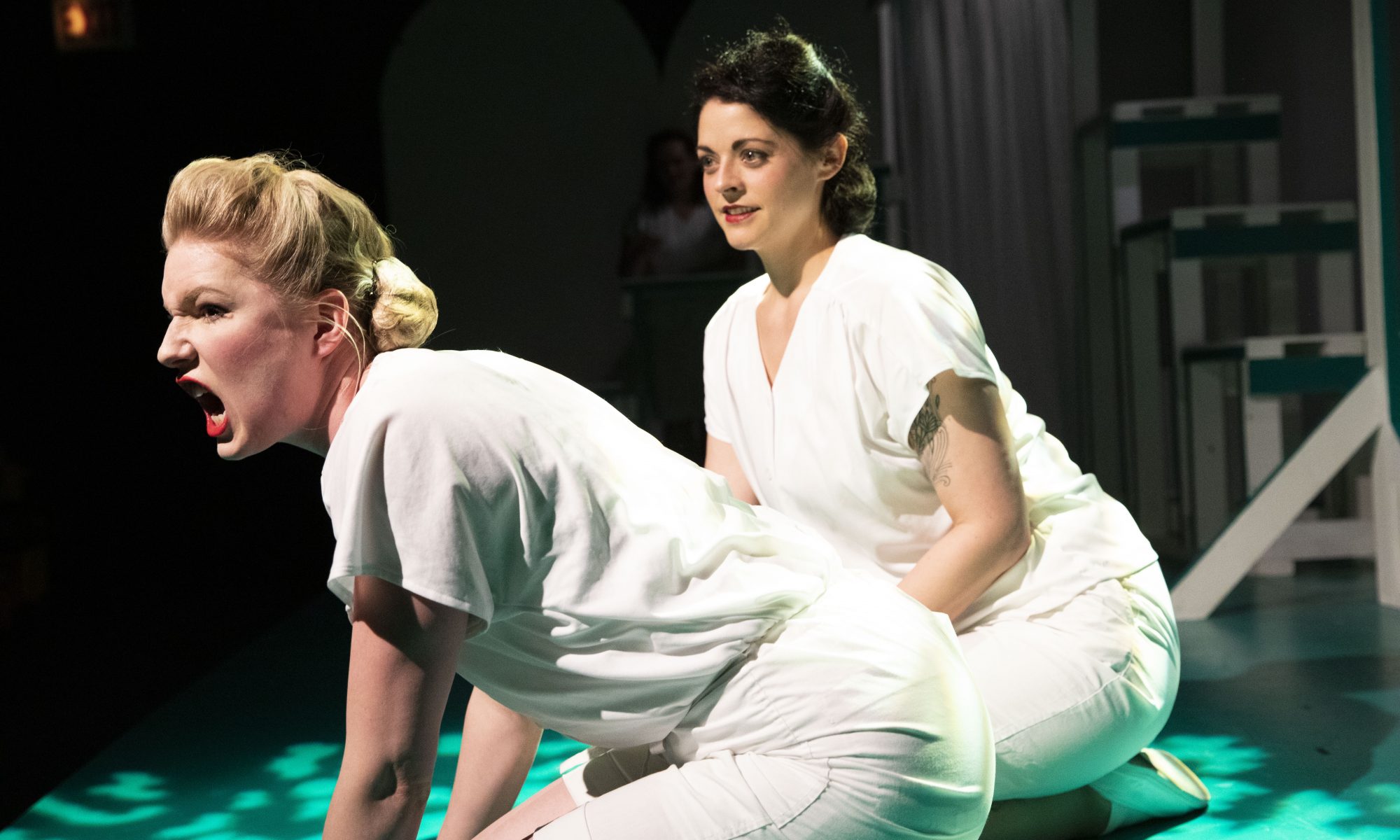 The show is a dramatization of actual history: Ginny is based on playwright Krista Knight’s actual great-aunt, who kept journals of her time at the sanitarium. This adherence to real life is perhaps responsible for my biggest criticism, which is that most of the plot happens in the last third of the script. As a result, the first two thirds — while they contain good setups, lovable characters, hilarious jokes, and a delightful mix of whimsy and terror — often feel static, unmoving, and difficult to follow. To be fair, compartmentalizing several years of one’s own painful family history, and then distilling it into a digestible ninety-minute chunk, is by no means an easy task.

There is plenty of wonderful craft to discuss here. The set from designer Jacqueline Frole consists of wooden bars, boxes, and steps set at perfect right angles to each other, suggesting rigidity while serving the function of a jungle gym. Actors sit, climb, jump, hang, and hide all across the imposing structure, juxtaposing the playfulness of the story with the constricting expectations of the era. The costumes (Rachel Sypniewski) are subtle but delightful; most everybody is in flowy, white, 40’s-style hospital jumpsuits — but several members of the ensemble pop in and out of the story as different characters by adding simple flourishes like jackets, coats, and hats. The ensemble does excellent work here as they switch between characters at a rapid pace — Ann James in particular deserves special mention, playing both Rosemary’s mother as strict, uptight, and high-class, and Ginny’s mother as compassionate, caring, and stressed.

The central idea presented here is a fascinating one. Namely, the gendered way that we imagine mental health (more pronounced in the 1940’s but certainly still present in modern times) is often just a repackaging of patriarchal violence, with convenient medical jargon. This concept is mostly funneled through Ginny. Ann Sonneville plays Ginny with a fascinating sort of straight-backed, trans-Atlantic, forced dignity, giving her the aura of a prim and proper housewife even as she exhibits none of the requisite behaviors. And strangely, most of the misogynistic and horrifying worldviews expressed in the play come right out of Ginny’s mouth, likely internalized over many years. It is both entrancing and heartbreaking to watch.

The lack of forward momentum in the first half works against the show’s emotional pace. By the time we reach the tightening vice of the story’s climax, complete with moments of medical horror choreographed with painful realism by violence/intimacy designer Bill Gordon, the tension doesn’t feel quite earned. Still, Lipstick Lobotomy is worth seeing for the excellent dialogue, delightful humor and heart, and important observations about misogyny and mental illness.