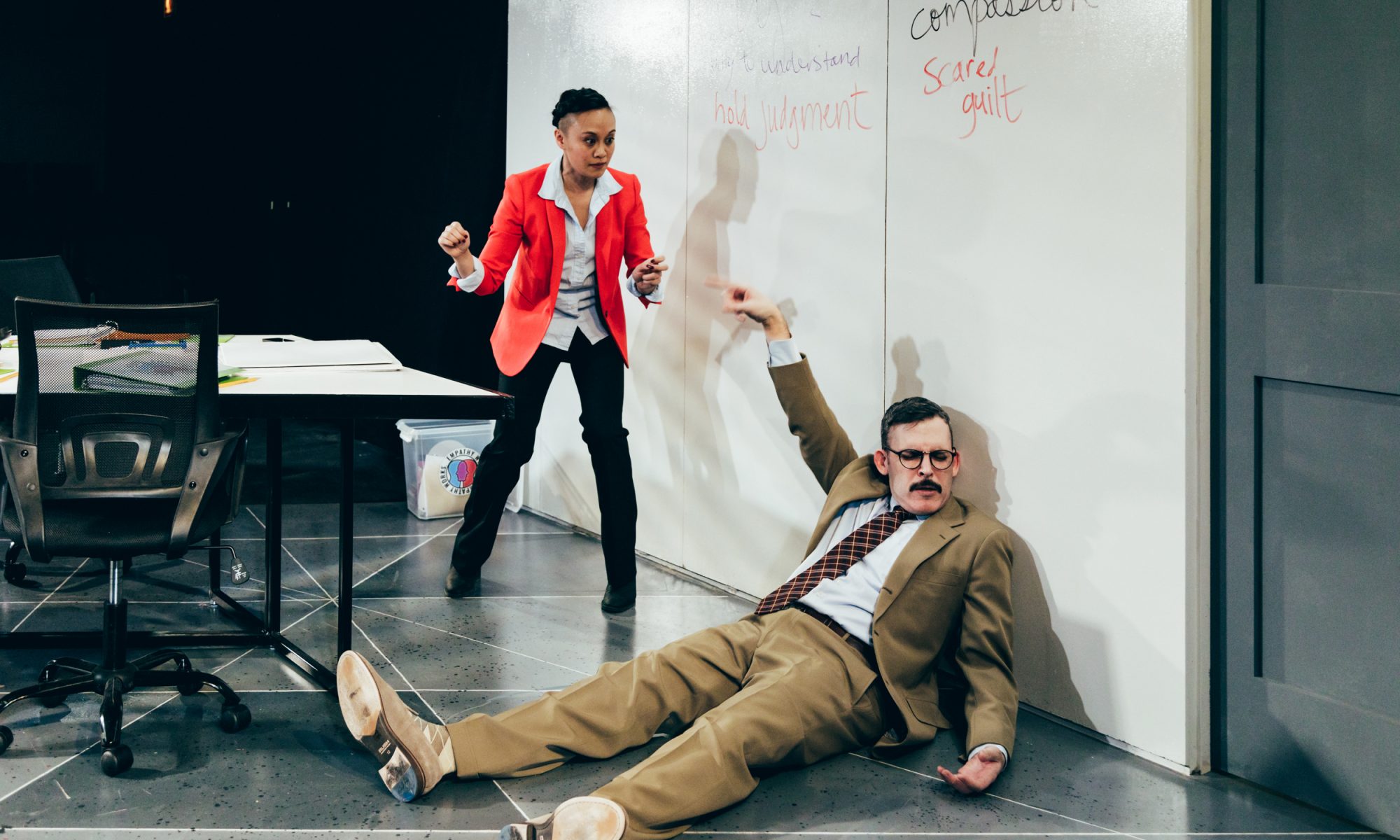 The humor of Mara Nelson-Greenberg’s darkly absurdist play is as unrelenting and as punchy as sketch comedy. There was hardly a moment that the audience was completely silent as successful gags are fired off by the ensemble in quick succession. However, the comparison to sketch comedy belies the subtlety and meticulousness of Nelson-Greenberg’s playwriting. Although its humor may seem obvious at first, Do You Feel Anger rewards the careful listener. As Sofia integrates further into the world of the office, early one-liners congeal into plot points, characters, and essential world building. Not a word is wasted—even seemingly irrelevant details all deliver on the promise of Chekov’s gun.

Beneath the decadent facade of the play’s finely wrought comedy, Nelson-Greenberg intiatiates a substantive and nuanced discussion of corporate work culture, gender politics, empathy, and radicalism. As absurd as the workplace backdrop is, it shares uncanny similarities with offices in which I have worked before. The environment is not an exaggeration, but a distillation. Nelson-Greenberg strips a workplace of all its conventions, tact, and circumlocutions, bringing all its hidden contradictions to light. Against her uncanny setting, Do You Feel Anger asks the questions: are men more prone to violence than women because they cannot express their feelings? Is accepting small progress the way to get things done or does it endanger the final goal? Is empathy truly the best principle for peacemaking?

Aided and abetted by a stellar cast, director Jess McLeod makes the most of all that Nelson-Greenberg’s play has to offer, from the lowest-brow of its comedy to the most heady of its philosophical undertones. Yet she still finds moments of poignancy and quiet emotional revelation within this whirlwind of a script.

However, McLeod sacrifices some elements of the script at the altar of humor—including the arc of Sofia, her lead. Although Sofia’s personal struggles are written into the script in a series of voicemails left by her mother (Jennifer Jelsema), McLeod chooses to have Gavino set up the props for each next scene during these monologues. Her reactions are, thus, invisible to the audience and, indeed, seem to have no bearing on her demeanor in each following scene. When the resolution of her personal arc finally arrives, it feels satisfying but unearned.

There were also a few moments of discomfort towards the beginning of the play when the production continued to make the same easy jokes at Jordan, Howie, and Jon’s expense. It seemed like the playwright and director were relentlessly punching down on men for being unaware and inept: Jon, the boss has to call the home office to figure out what a period is. However, as the play ramped up and began to delve deeper into its philosophical questions and the emotional world of the characters, these easy jokes gave way to more carefully crafted humor.

Where McLeod delivers best on the promise of Nelson-Greenberg’s writing is in her treatment of Eva (Sadeih Rifai). Eva begins the play as a blathering picture of feminine self-denial. She cheerily insists that she is fine, despite the fact that she experiences violent crime on the daily. By the end of the play Eva embodies the indignation and resolve that Sofia loses, and becomes a rounded character in her own right. Stephanie Cluggish’s costume design tracks the reversal perfectly: as Eva grows in confidence, she trades her dowdy cardigan for a bold red turtleneck.

The design elements fill in the details of the already rich world of the play. Lighting designers Mike Durst and Becca Jeffords create a surprisingly versatile light grid out of two panels of LEDs which recall the fluorescent panels of an office. Jeffery D. Kmiec’s set is a dead ringer for an office conference room, complete with swivel chairs and whiteboards, and holds a few well timed surprises. Elenna Sindler’s skillfully crafted sound design adds a dreamlike element to the otherwise naturalistic design. Toying with the distinction between reality and fantasy, Sindler crafts subtle yet evocative soundscapes that underscore the play’s heightened moments of emotional revelation.

Overall, Do You Feel Anger at A Red Orchid Theatre is not to be missed. It combines poignancy with off-the-wall comedy, disguising the bitter pill of modern gender dynamics within the easy-to-swallow capsule low brow comedy. The audience comes for a laugh, stays for a think, and leaves lightheaded from laughter yet simultaneously full of resolve.