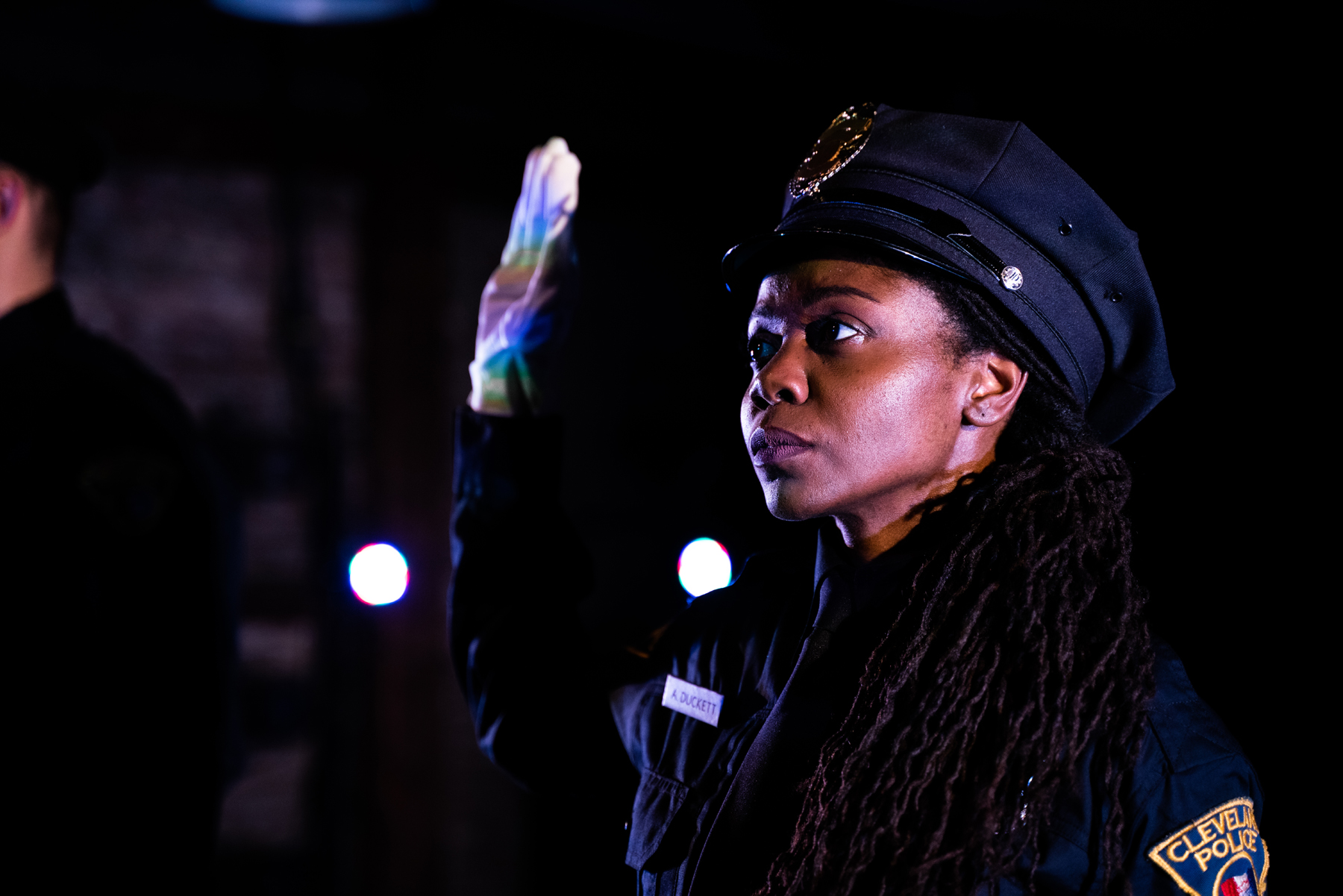 Sheepdog is told from Amina’s point of view. She narrates in the second person, speaking through each moment with a deeply personal yet distant “you.” Amina is caught between her role as the observer and subject. Leslie Ann Sheppard’s performance echoes this duality. Her vocal performance is clear; she is not a woman who minces words and it is important that you hear every syllable. Sheppard’s physical performance is where she explores the gray area. Emotional labor weighs on her movements from one scene to the next, tinging even the most loving moments with elements of fear – and vice versa.

Ryan, on the other hand, is a white male reckoning with his own privilege. He is running from his backwoods “trailer trash” upbringing which left a vile and racist taste in his mouth. Ryan is doing the work to be a better man and a better cop, but when pressure grows he finds comfort in the systems that were built to protect him. Drew Schad’s performance is intricate and gorgeous. The intimate space he shares with his co-star is felt equally by the audience. His Ryan is breakable, and yet capable of untenable harm.

The set design by Sydney Lynne is clean. The bold lines of this modern apartment are crisp and white, save for the black marble that scales the wall closest to the audience. The sleek furniture is cold and the walls are empty. The small collection of books below an end table is the only sign that anyone lives here. Over time, however, the world creeps into Amina and Ryan’s shared home. Projection design by Smooch Medina transforms the large blank structure into a bar, a hospital, and a crime scene. Along the top edge, a rewind symbol appears when Amina moves the world backward. The set contorts as she revisits moments from their relationship. Lighting design by Jason Lynch drapes the production in red and blue. This blending switches between a soft violet effect and a harsh battering of primary colors.

Wardell Julius Clark’s cinematic style makes a painting of the actors on stage. He harnesses the power of proximity to tell us everything we need to know about Amina and Ryan. One particular moment has stuck with me long after: when Amina’s view of Ryan first begins to obscure, the two twist away from each other and then swing back chest-to-chest. It’s a single step for each of them, but it feels like a canyon. Each moment is crafted with breathtaking detail, and that is what makes the Chicago premiere of Sheepdog so successful. This play deals with the life and death implications of implicit bias, and that kind of story requires extreme care. Wardell Julius Clark and Shattered Globe Theatre take on an immense responsibility in both criticizing and empathizing with the characters. It is a delicate technique, an act of love, and its success can not be overstated.