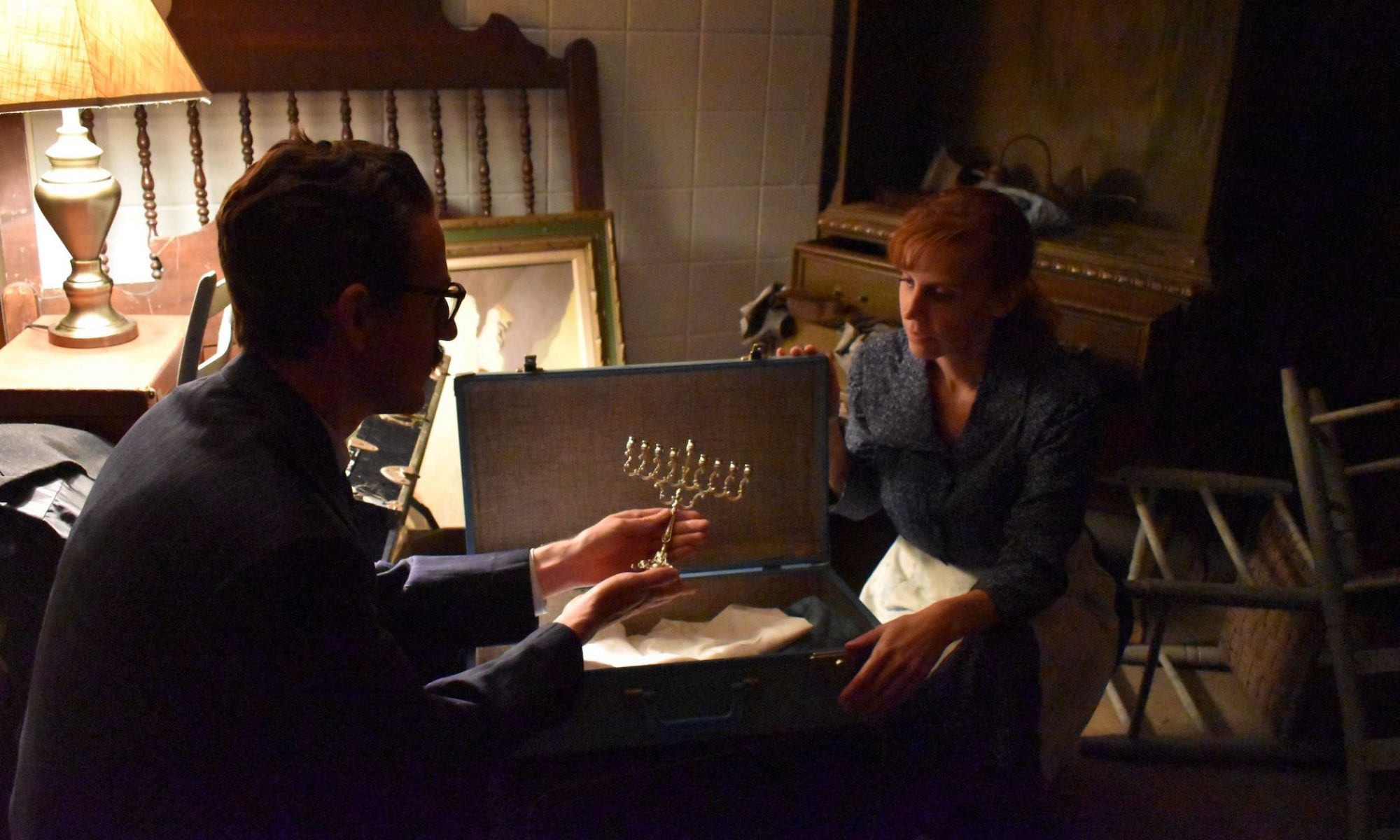 Grace and the Hanukkah Miracle is an immersive theatre piece in which an unnamed, protagonist in a cowboy hat (Anderson Lawfer) asks the audience to go on a wild time-traveling  adventure so as to retrieve his wife Grace’s (Nicole Bloomsmith) family menorah and present it to her as a Hanukkah gift. The rest of the show unfolds almost like a video game, as you and your fellow audience members progress through different rooms in the basement of Grace Lutheran Church in Evanston — collecting clues, solving basic puzzles, and interacting with characters from various points in Jewish history.

The various design elements do admirable work transforming a church basement into various locales and eras. The costumes (Rachel Sypniewski), sounds (Jeffrey Levin), and scenic design (John Wilson) all work together to create a fun, believable, goofy sci-fi reality that is effective at making you feel like you are on an adventure. The lighting (Daniel Friedman) deserves special mention, pulling extra weight as you are guided through “time-vortex” hallways with mad rainbow colors, to unique rooms, each with an atmospheric golden glow.

The script, however, falls somewhat short. Focus is kept mostly on establishing the various timeframes and engaging the audience with the interactive bits. The characters are mostly stock cutouts, there for the purpose of serving exposition about Grace’s family or Jewish history. While the educational aspect could have been fun and illuminating, the overly sentimental dialogue drags it down. The actors do well enough with the material, but struggle with a text that often feels like it’s talking down to children. As a result, Grace and the Hanukkah Miracle feels half like a kindergarten classroom lesson, and half like the most awkward Hanukkah party you’ve ever been to (and believe me, I’ve been to a few).

Last year’s Herschel and the Hannukah Goblins at Strawdog Theatre (another kid-oriented Channukah show directed by Jacqueline Stone and starring both Nicole Bloomsmith and Anderson Lawfer, and yet more evidence that there is no correct spelling of Hanukah) was attempting to serve many of the same functions as Grace. Namely, a fun, heartwarming, and surreal romp deeply rooted in Jewish history. Herschel, however, was much more successful due to a refreshing lack of simplification or condescension. It simply presented a charming, clever story and trusted the kids to be smart enough to get it.  Grace and the Hanukkah Miracle could have benefited from a similar confidence and straightforward mode of storytelling.

It is worth noting that the few young children who were at the press opening I attended had an absolute blast. All my millennial cynicism is nothing compared to a child’s eagerness for easy puzzles, competition, and time travel. And it could be that this show is much more fun with a roomful of parents and young children, rather than a mostly adult room of theatre critics. Grace and the Hanukkah Miracle is well worth bringing the family; just accept up front that your kids will likely enjoy it much more than you will.