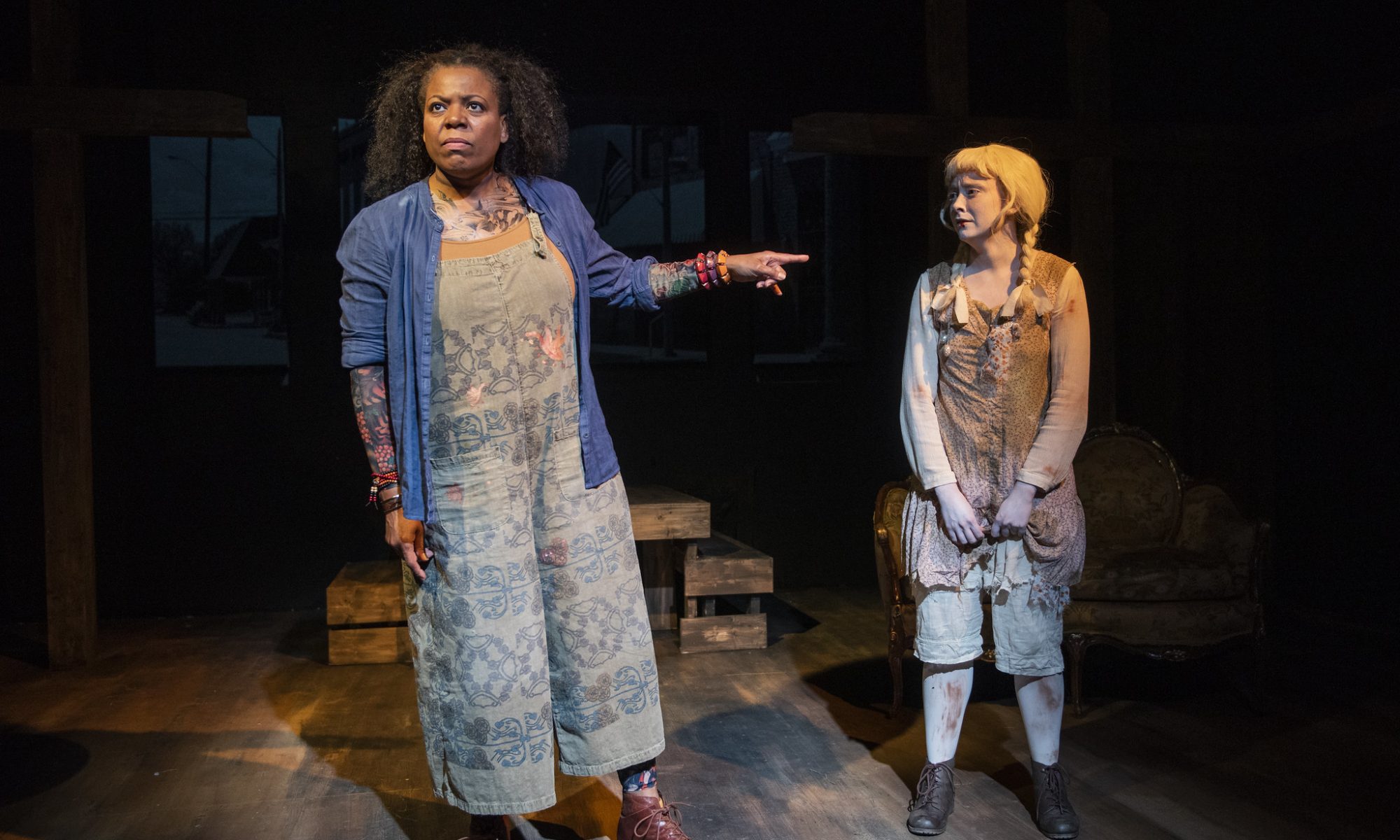 The set of Invisible, designed by Kevin Rolfs, is simple — showing half of Mabel and Tom’s general store, and half of Jubal’s living room. Behind the juxtaposed rooms, a triptych of projection panels helps to set the scene and provide extra information at different points of the show. Invisible takes place in the 20’s, and the design elements don’t feel distant or heightend like a more romantic period drama might. The mundane, familiar feel of the set is contrasted by bold lighting, designed by Blake Cordell. Intensely colored pink, green, and yellow lights create an appropriately swampy southern sort of feel that also feels a bit otherworldly.

This show is full of so many wonderful performances I can’t highlight them all, but Maddy Fleming’s performance as Ghost Girl has really stayed with me. Ghost Girl traverses all of Mounds’ segregated worlds, and she carries much of the joy and fear that other characters experience. Her character is argumentative and prone to recklessness, which can be challenging for a performer to personalize, but I found myself with her at every step. The bifurcated set also helped to ground the idea of Ghost Girl’s many traversals in the theatrical space.

Invisible is clearly the product of intense research into the height of the KKK in Mississippi, Louisiana, and Alabama in the mid 20s. The show takes care to explore how the WKKK harnessed disenfranchised white women’s desire to claim political power and resist sexist ideas of womanhood, and focused those desires on spreading racist ideologies and violence. At the end of the play, distraught by the course of events in the town, Mabel asks her husband “How did this happen?” Mabel is completely unable to see how her own actions have contributed to her personal devastation, and the town’s, but to me in the audience the answer was clear. Invisible feels a lot like an answer for a modern audience asking themselves a similar question about racism and how it’s perpetuated. The characters’ varied motivations help to paint a picture of how systemic racism can be enacted through individuals. It’s important to note that Invisible keeps a close focus in its examination of how white supremacy functions and is perpetuated.

Invisible may be an unexpected view of the impact of the KKK for many audience members. The play focuses mainly on white characters and their desires, therefore most of the historical harm depicted and pulled into focus by the show is about white people. For people looking to see a story about the widespread impact of the KKK and and how racism can negatively impact white people, this show will have a lot to offer. For people who understand the history of violence by KKK as part of their family history or racial identity, especially for Black people, the focus of this show may leave them feeling a little de-centered. To be clear, there are mentions of offstage organized mass killings of both Black and white characters, but there is only one Black character who is part of the action and plot. For me, as a Black person who is relatively familiar with this history, the show never felt avoidant in its focus, but I did wonder why that deliberate choice had been made.

I genuinely enjoyed Invisible. It’s clearly a show carefully rooted in actual history, but it also takes time to focus on every aspect of the character’s lives. As much as Invisible is a show about the KKK and gender inequality, it is also a show about familial bonds, grief, and joy in times of conflict. The tone never settles into hopeless somberness or reductive cheerfulness, which helped me process the gravity of the larger story the show told while reflecting on the characters’ individual paths and choices.

Invisible is an engaging show, featuring smart design choices, and thoughtful well-researched writing. Many audience members will leave feeling more educated, and more able to imagine the lives and thoughts of people who seek power through white supremacist organizations and ideas. Invisible offers an interesting kind of immersion into this place and time in US history, that has intrigued me in lasting ways. This is the kind of show which is great in the moment, but gives audiences just as much to take with them when they leave.