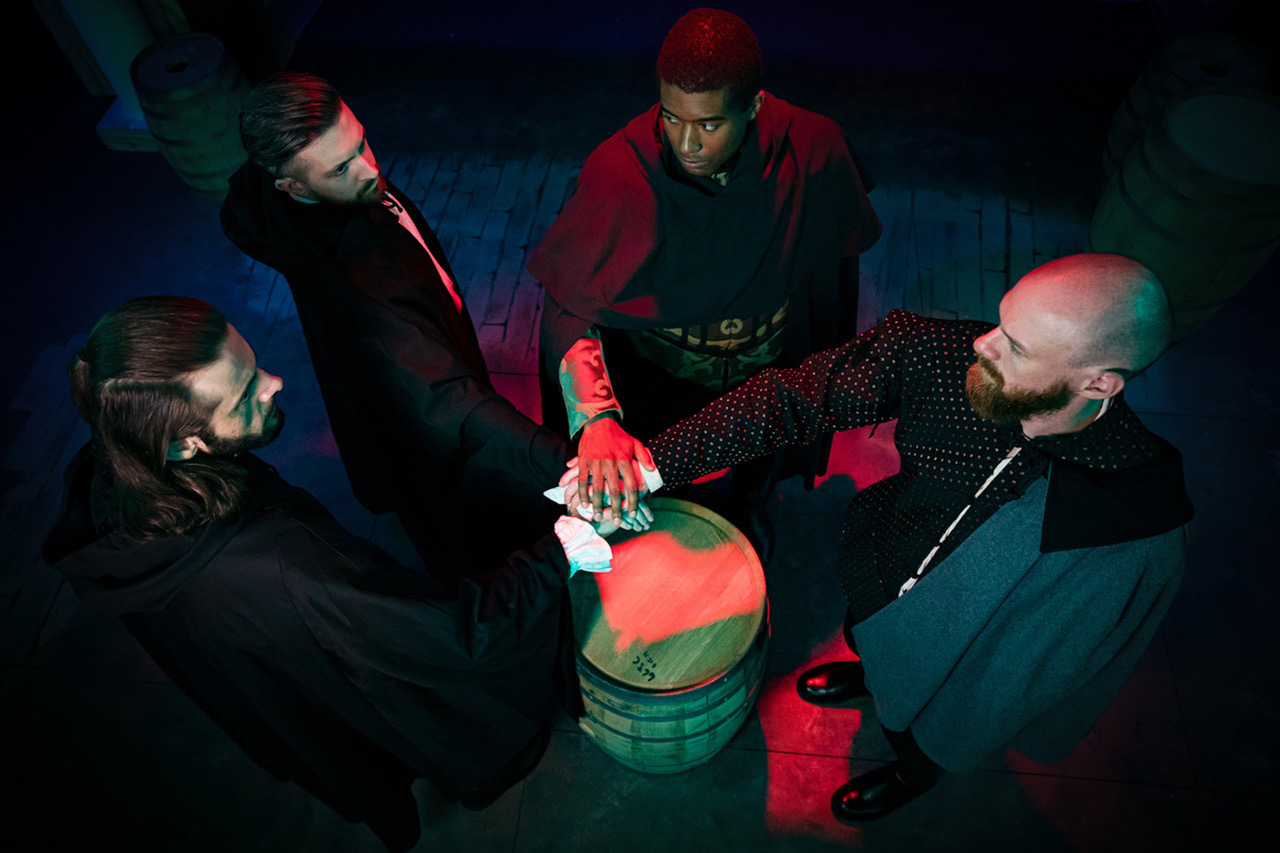 It’s a fascinating question, and Equivocation at Idle Muse has the answer. After all, the famed Catholic plot to assassinate King James I happened in 1605, right around the time when William’s plays were at the height of popularity — as a mashup, it’s an entertaining and slightly scandalous idea that immediately grabs your attention. Playwright Bill Cain does a marvelous job of grounding the dialogue in the speech and politics of the era, such that the slowly unfolding conspiracy is both heightened and believable. The structure here is complex, interfolding, and lovely. Director Evan Jackson keeps things moving nicely; characters speak quickly and cleverly, taking us through emotional beats with efficiency and flair. There are lots of long scenes that could easily have dragged, but each one has a distinctive shape and feels like a journey through a big, empty house with lots of fascinating rooms.

As we open, William Shagspeare (as his name was pronounced at the time, and played with an everyman pathos by Brendan Hutt) is in a meeting with Sir Robert Cecil (played with bombastic, evil gusto by Michael Dalberg), a liaison to King James who provides Will with an outline of a propaganda play about the aforementioned plot, where the Catholic conspirators are painted as villainous and the Protestant king is celebrated. William, who isn’t even all that invested in the politics at first, objects on several grounds, not least that he doesn’t write plays about current events — but the money is too good to turn down. However, as Will struggles to eke out a draft and rehearses with the rest of the King’s Men, he begins to discover some plot holes in Cecil’s account of the Gunpowder Plot. As he grows more curious and wades deeper into the mystery, he is faced with a choice. Should he write an honest, bold, challenging account that challenges the status quo but potentially puts him and his friends in danger? Or, should he stick with the bland piece of propaganda he was commissioned to write and walk away with the money?

The rest of the play unfolds half in the manner of a Tom Clancy conspiracy thriller, and half like a treatise on the purpose of art in times of tyranny. It is bolstered by strong design choices throughout. The set from Mile Bue is mostly stationary and evokes the stage at the Globe Theatre, complete with ornate stone columns and curtained entryways. Interactive bits like tables and chairs are mostly represented by moveable wooden barrels, keeping things minimalist and direct. And the lights from Laura Wiley, while mostly a standard yellow-ish daytime wash, are responsible for a number of delightfully creepy moments when the stage suddenly floods with red, or green, or blue, at key moments.

The performances are particularly strong; six actors play over thirty characters, often differentiating with nothing but their voices and postures, often several times throughout the same scene. This could have easily devolved into farce, but it’s done with such deliberateness and attention to detail that we can always keep track of who is playing whom.

But of most interest to me is the beautiful, complex little philosophical argument presented here, in a string of viewpoints and ideas that constantly reshapes and folds in on itself, like a space-defying Rubix cube. There are important observations in here about how we look at our own history, and how one should make art when one lives under a government that goes out of its way to suppress truth.

For instance, I like that the play doesn’t take a side on the issue of the Gunpowder Plot. Certainly the English Protestant monarchy is painted here as a paranoid, totalitarian government. Still, the narrative never endorses the violence and potential casualties the Gunpowder Plot would have caused had it succeeded. What William — the character who serves as the play’s moral nexus — takes issue with is the way the monarchy is using the story of the Plot, twisting it to their own ends. Watching this show, I almost saw a strange parallel with the way we talk about 9/11. In particular, one can can mourn for the 3,000 Americans who died, and call it an evil act of terrorism, without condoning how the American government responded to 9/11 in the decade after it happened. When powerful groups try to twist the narratives around real tragedies to further their own ends, stoking bigotry and disharmony along the way? That can be just as evil, and we have to speak up against it.

But how exactly should we speak up? As William learns to his detriment, writing the boldest and most daring hot take about the Gunpowder Plot could have disastrous consequences for him, his actors, and their families. The specter of Sir Robert Cecil and the awful things he could do looms over the proceedings like a shadow — and through several gut-wrenching scenes of brutal violence choreographed by Libby Beyreis, we see Cecil’s cartoon evil turn to true evil in the space of a moment.

So where’s the middle ground? Art is powerful, but in times of tyranny the artist must become just a little sneaky. How do you change people’s minds and empower the public, without tipping off those in power that that’s what you’re doing? I won’t spoil anything for you, but I will say that the answer lies in the title of the play. Equivocation here represents that point of perfect rhetorical balance, halfway between rage and satire. Between blind rebellion, and knowing your enemy better than he knows himself.

Cain’s script can get a bit too dense and plot-heavy, and some key points in the second act are a bit muddled and anti-climactic. Overall, though, Equivocation feels like a haunting and dread-inducing ride down a long, sizzling length of burning fuse that, instead of igniting, leaves you breathless in anticipation of the explosion.