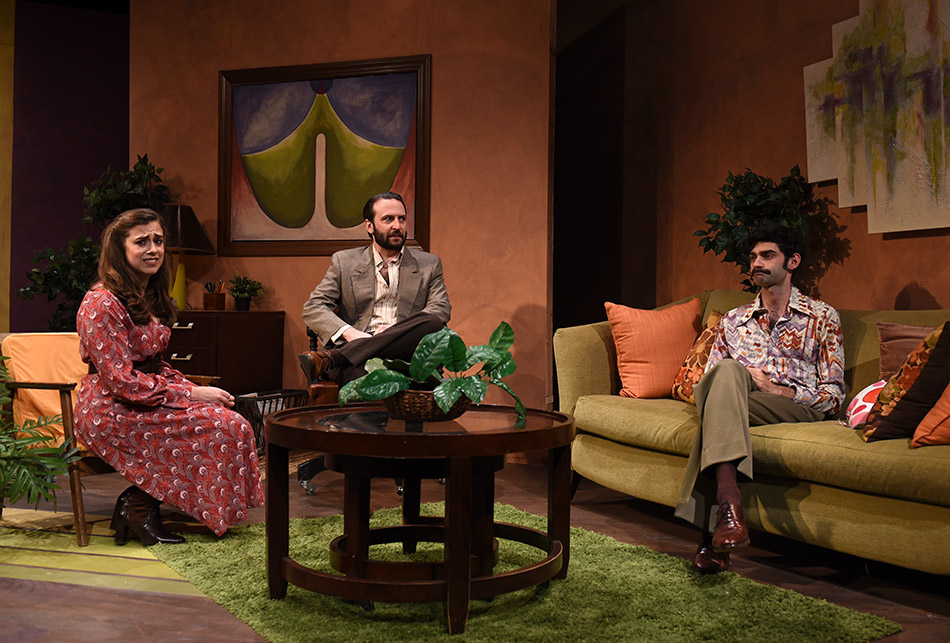 I love a good farce. It’s a style of comedy specific to theatre that we don’t get to see a lot of anymore. In my opinion a classic farce contains three key elements: exaggerated characters, stylized performances, and sex. Eclipse Theatre dives into this genre with Christopher Durang’s Beyond Therapy, the second production of their all-Durang season. Director Rachel Lambert choreographs chaos with a hilarious cast, combining all these elements that I’ve come to know and love. The production’s sporadic tempo, however, slows down the momentum necessary to push these outrageous situations to their breaking point.

First produced in 1981, Beyond Therapy is set during the same era. Durang includes a significant amount of pop culture commentary specific to this time, adding another degree of comedy to the farce style. The design does an excellent job of alluding to period without making the play a “period piece.” The set by Sam Rausch is the ultimate playground, covered in early 80s style. The stationary set with a single piece of transformative wall art places the power to push the world forward in the hands of the characters.

Beyond Therapy begins with two Manhattanites, Prudence (Devi Reisenfeld) and Bruce (Nick Freed), on a dreadful first date. Prudence is nervous, traditional, and unlucky in love. Bruce is unpredictable and unapologetically emotional. This couple is critical of each other, their first date is terrible, and yet there’s an undeniable connection between them. Devi Reisenfeld and Nick Freed have fantastic chemistry. Bruce cries out of nowhere and Prudence continually puts herself into uncomfortable circumstances, but these two find comfort in each other’s eccentricities.

Most of Bruce and Prudence’s interactions are verbal, but farce is a physical kind of comedy. Charlotte (Lynne Baker) and Bob (Siddhartha Rajan) bring a full-body approach to their characters. Lynne Baker is phenomenal as Bruce’s scatterbrained therapist. With the help of a stuffed Snoopy, Baker is able to rally the characters and the audience to cheer on terrible decisions. Siddhartha Rajan is hilarious as Bob, Bruce’s live-in male lover. Rajan’s skilled escalation raises the stakes and the style. These characters are made extra wacky thanks to the styling choices of costume designer Zach Wagner. Specific choices like Stuart’s belt buckle or Prudence’s boots are living pieces of their character.

Combine outrageous characters with stylized performance and tensions really start to build. Lynne Baker and Siddhartha Rajan are the most stylized performers in the cast, which makes it all the more wonderful when they finally share the stage. With Rajan slowly drooping to the floor and Baker barking at her newest patient, their scene is sharp, physical, and exciting. When this play moves it’s hot, but nothing kills laughter faster than space. Without consistent or even increasing friction, the fire dies down and the play loses steam. Beyond Therapy slows to an unsatisfying stopping point following a frenzied climax. Things just muddle their way toward sweetness.

The last ingredient you need for a classic farce is simply sex. Everyone wants it. Nobody’s getting it. And it’s seemingly everywhere. There’s a painting hung up in Stuart’s office that’s a not so subtle depiction of breasts. Charlotte receives physical pleasure after finally taking a bite into a cookie. Bob is able to find comfort in the arms of a sexy waiter (apparently the only waiter at this restaurant). The least sexual of the group are the two main characters, and they are incidentally the most grounded. Beyond Therapy knows what it means to be a farce. If you haven’t been introduced to this underrated genre, then Eclipse Theatre’s Beyond Therapy is the perfect first date.

Beyond Therapy was produced by Eclipse Theatre Company and ran through August 18th.