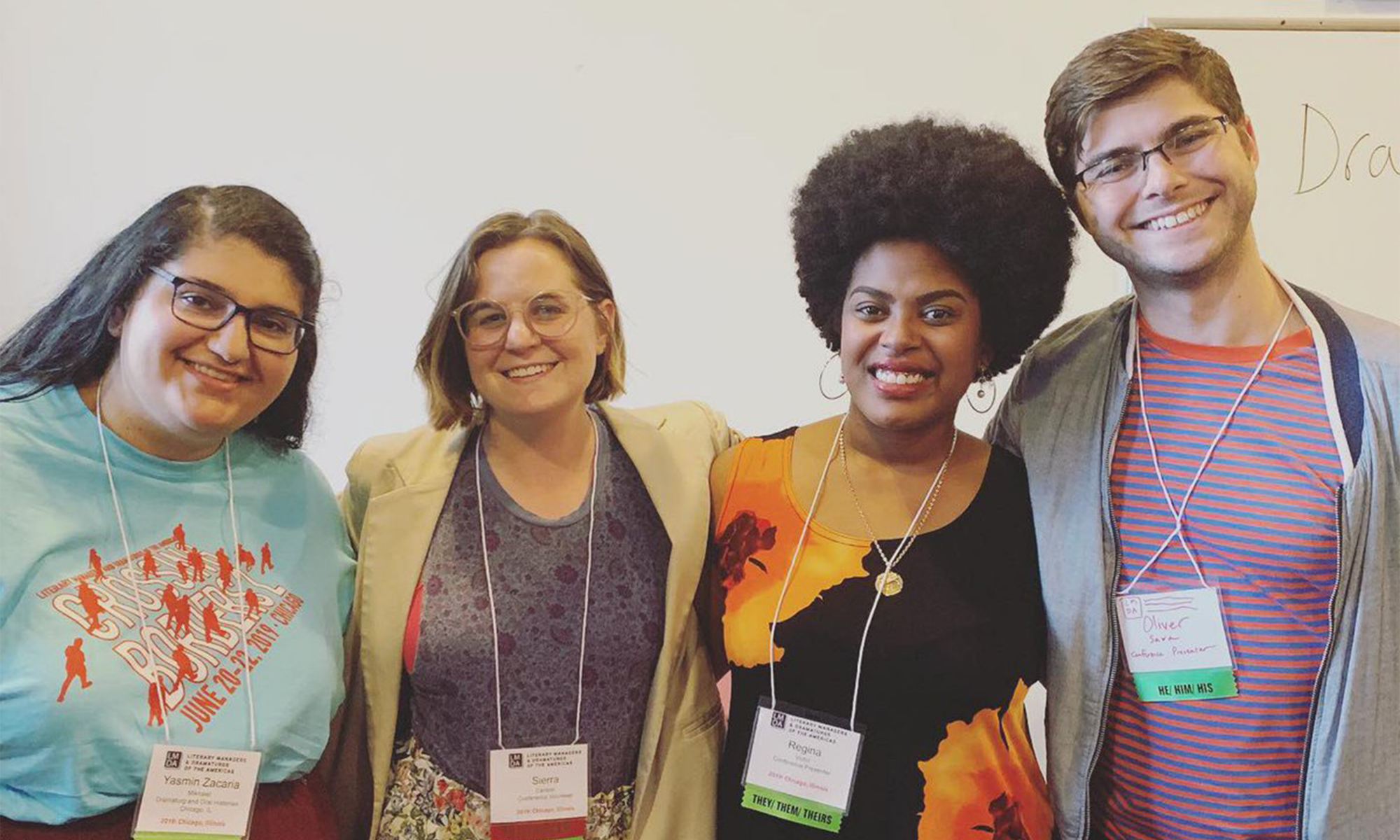 Each biweekly meeting of The Key features review workshops, discussions led by mentors Victor and Sava, as well as guest speakers from different areas of the local arts community. The Key students also attend theater performances in Chicago and hone their reviewing skills by writing critiques that are published on Rescripted’s website. In previous sessions, The Key has reviewed productions from First Floor Theater, Firebrand Theatre, Raven Theatre, Shattered Globe Theatre, Steppenwolf Theater, TimeLine Theatre and Victory Gardens Theater. Guest speakers for the program have included:

Applications for The Key: Young Critics Mentorship Program are currently being accepted on Rescripted’s website (rescripted.org/the-key/) through Friday, Sept. 7, for writers ages 18-24 years old. The session begins Wednesday, Sept. 25 and meets every other Wednesday through December 4. For additional information and inquiries, please e-mail thekey.chicago@gmail.com, and you may follow The Key on Facebook, Instagram, and Twitter.

“The Key provided me with the space and resources to think and write in a city that hasn’t been good to its POCs,” says The Key alumnus and Rescripted Reviewer Yasmin Zacaria Mikhaiel. “Here I built confidence in my voice and expanded my mind to what criticism could look like when folks are culturally competent and empathetic.”

“As this program has grown into its third year, we recognize that the need for training a wide range of young critical voices that can be advocates for the artistic community has become more important than ever for the survival of our field.” says Regina Victor, founder of Rescripted. “Empathy in Criticism and the Arts is a personal practice that is reflected in Rescripted, we are focused on making the arts more accessible for everyone, and that starts with our audiences. This program is designed not only for aspiring theatre critics, but aspiring journalists and aspiring artists. Collaborative critique is the backbone of our art form, everyone can benefit from our free program. Oliver and I come from very different critical backgrounds, and because of this we are the perfect blend of co-facilitators to ensure these students learn the tools of traditional criticism, as well as cultivate the empathy needed to write our way into a better world.”

“After two sessions of The Key, we’ve seen what a difference it makes when young writers gain access to art and the support to engage with it on a deeper critical level,” says Oliver Sava. “The growth of our students over the course of each session is remarkable, and it’s especially exciting to see a new generation of critics emerge who aren’t separate from the arts community, but using their experience within it to enrich their writing.”

“It is essential that the next generation of critics grows with the community’s rapidly changing landscape,” says Chicago Inclusion Project Founder Emjoy Gavino. “Regina and Oliver both have their finger on the pulse and I can’t wait to see how the students will flourish under their mentorship. Our industry needs these new voices.”

ABOUT REGINA VICTOR
Regina Victor (they/them/theirs) is an arts critic, director, dramaturg, and multidisciplinary artist. In 2017 Victor founded Rescripted, an online arts journalism platform by and for artists in Chicago. Their writing can be found in Howlround, American Theatre Magazine, The Windy City Times and Rescripted. The Key: Young Critics Mentorship Program founded with Oliver Sava is an off-shoot of Rescripted, and trains emerging critics in the craft through the use of subjective perspectives and empathy. As an artist, Victor has helped develop world premieres by Antoinette Nwandu (Breach:…), Brett Neveu (To Catch A Fish), Sarah Ruhl and Morgan McNaught (A Persephone Pageant), and Loy Webb (The Light, His Shadow) among others. Recent credits include assistant directing The Roommate and Familiar at Steppenwolf Theatre, and dramaturging Too Heavy for your Pocket and To Catch a Fish with Timeline Theatre. Victor is currently serving as associate producer at Court Theatre and is an artistic associate at Sideshow Theatre. Learn more about Victor at www.reginavictor.com.

ABOUT OLIVER SAVA
Oliver Sava (he/him/his) is a Chicago-based entertainment writer focusing on comic books, dance, television and theater. He was a staff theater writer at Time Out Chicago, where he had a “Performer Of The Week” interview column. His writing on comic books, film, podcasts, television and theater has been published at The A.V. Club, Chicago Theater Beat, Chicago Reader, Chicago Tribune, Entertainment Weekly, The L.A. Times, NPR Books, Rolling Stone, Vulture, VICE and Vox. He is a 2017 fellow of The Eugene O’Neill Center’s National Critics Institute and a recipient of the 2017 Eisner Award for “Best Comics-Related Journalism/Periodical” for his A.V. Club writing. He graduated from Loyola University with degrees in English and Political Science, and was the dramaturg for Jackalope Theatre’s Prowess (2017 Jeff Award winner for Best New Play). You can find his writing at www.oliversava.com.

ABOUT RESCRIPTED
Rescripted’s mission is to reprogram the way we critically engage with each other using an empathetic lens, while cultivating critics and adding new voices to the field. We are a collective of theatre professionals from all levels and disciplines in the field who are interested in engaging with their peers on a critical level based in the Chicago theatre community. Founded by Regina Victor and Katherine O’Keefe in 2017, Rescripted is a response to the national shortage of a diverse body of theatre critics, and publishes reviews, artist interviews and essays on the performing arts. The Key: Young Critics Mentorship Program is an early career artist-critic training program offered by Rescripted in collaboration with Chicago Inclusion Project, co-facilitated by Regina Victor and Oliver Sava. www.rescripted.org.

ABOUT CHICAGO INCLUSION PROJECT
Founded by Actor/Casting Director Emjoy Gavino (she/her/hers), The Chicago Inclusion Project is a collective of artists, committed to creating inclusive theater experiences by bringing together Chicago artists and audiences normally separated by ethnic background, economic status, gender identity, physical ability and countless other barriers. By deliberately choosing the unexpected, both in play choices and non-traditional casting, cultivating a diverse audience by bringing new combinations of artists to as many communities in Chicago (and it surrounding suburbs) as possible, choosing facilities for the multiple projects that are handicap accessible and keeping price of tickets affordable, The Chicago Inclusion Project programming aims to unite diverse collections of Chicagoans. For more information, visit thechicagoinclusionproject.org.