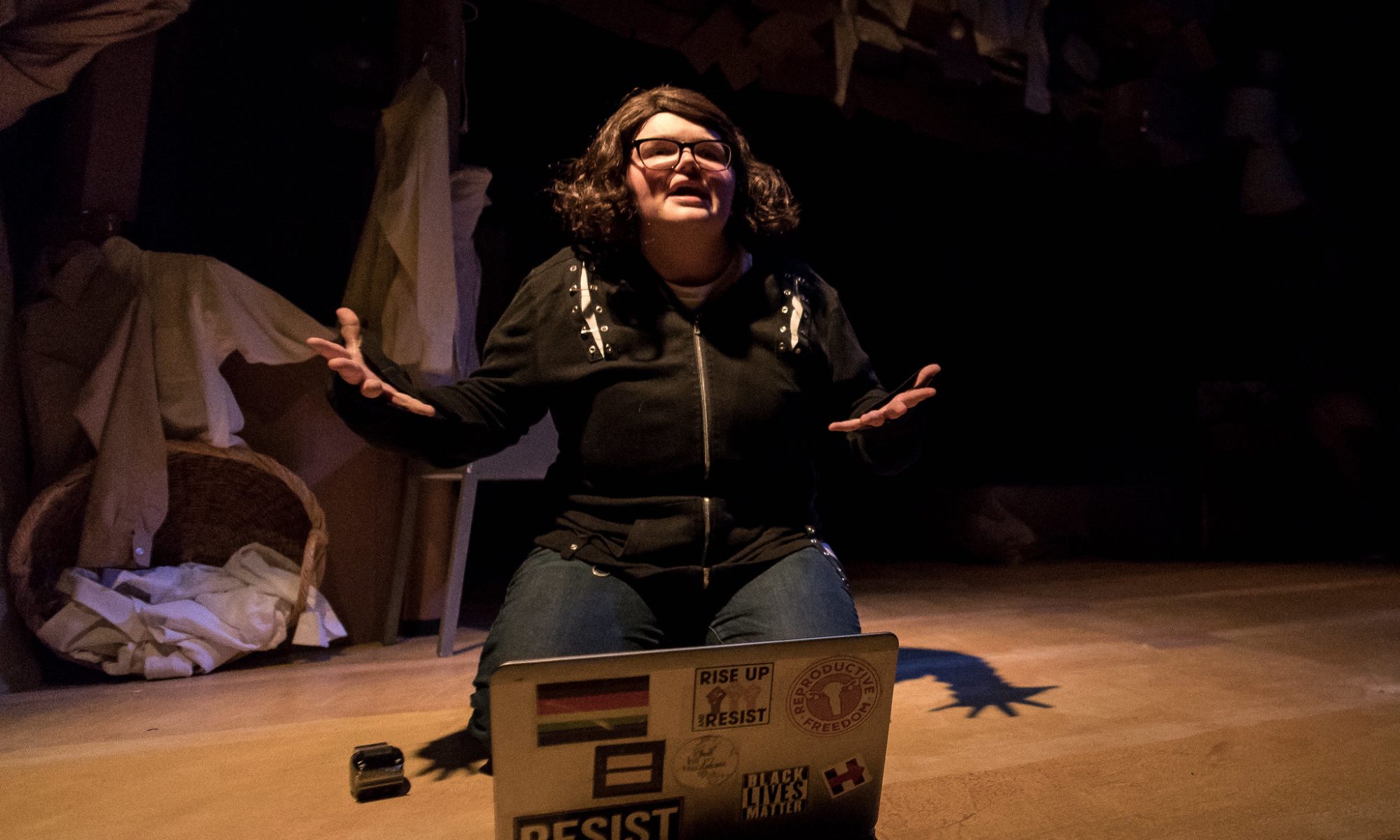 Bury Me, written by Brynne Frauenhoffer and receiving its world premiere with Dandelion Theatre, tells the story of a family making hard decisions about marriage, children, and death. By drawing its audience into the complicated lives of one family, Bury Me explores these hotly debated topics through moments of personal exploration.

The set of Bury Me, designed by Nina D’Angier, is made primarily out of cardboard. The large boxes, and paper bag bricks, and cut up cardboard panels sculpt the space in a way that felt intriguing. Adorning the cardboard are baskets, white lampshades, and white clothes. Right away the collection of items brought to mind ideas like childhood and purity, which make for an interesting tension with the subject matter of the play.

Bury Me is a play, in part, about the narratives people create in their own lives about abortion and other reproductive health decisions. Josh (David Stobbe) and Michelle (Gabbriella Diaz) are visiting Josh’s parents in what seems like a routine visit to celebrate Michelle’s pregnancy, and to check in on Mark (Scott Olson), Josh’s ill stepfather. Ru( Holland), Josh’s teenage sibling, is coming into their own sense of justice and view on politics, and they’re determined to challenge injustice around rape culture and reproductive rights wherever they see it, both online and off. At the same time Christy (Allison McCorkle), Josh’s mother, find herself, her conservative political views, and her Christianity-based belief that abortion is wrong at odds with Ru at all times. Josh’s high school friend Amy is thrown into this mix after a surprising revelation.

There is a lot going on between the characters of this play and at times I felt like I just couldn’t keep up with everything happening. Still, Bury Me featured so many tender moments which arise from its many complex relationships, and these stayed with me after the play. Included among them are a beautiful coming out moment, a visually symbolic depiction of loss, and a thought provoking conversation about being present as a father. Bury Me is a play which refuses to take on one topic at a time, which is great but it also means its impossible to process all of the perspectives it holds. The show’s pacing is consistent but it takes us to many different places giving us glimpses into the minds of characters with different perspectives. This approach makes the play much more emotionally impactful but it also means that we never get too deep into any character’s point of view because there are so many to cover.

Bury Me is mostly a realistic family drama, but the most interesting aspects of the production, to me, were the parts which veered into abstraction. The cardboard set, the visual motif of dirt, the fact that none of the actors wear shoes. Even though I felt that I couldn’t take everything in, I enjoyed the sense of exploration the play held. I also love that although this play is in large part about the discourse around abortion and reproductive rights and Christianity, the play doesn’t anchor those themes with an individual character’s decision making about sex, pregnancy, or religion. This contributed to the feeling that the characters in the play were all moving and exploring themes, but that they weren’t all going to land in the same place.

Bury Me is a sincere and thoughtful play with many complex themes. Brynne Frauenhoffer is a playwright skilled at building themes into relationships, and I’m interested in seeing what she does next. Featuring a beautiful set and lots of perspectives this is a play which offers as much to process and talk through after people leave the theatre as during the play.

Bury Me was produced by Dandelion Theatre and ran at Rivendell Theatre until July 28th.