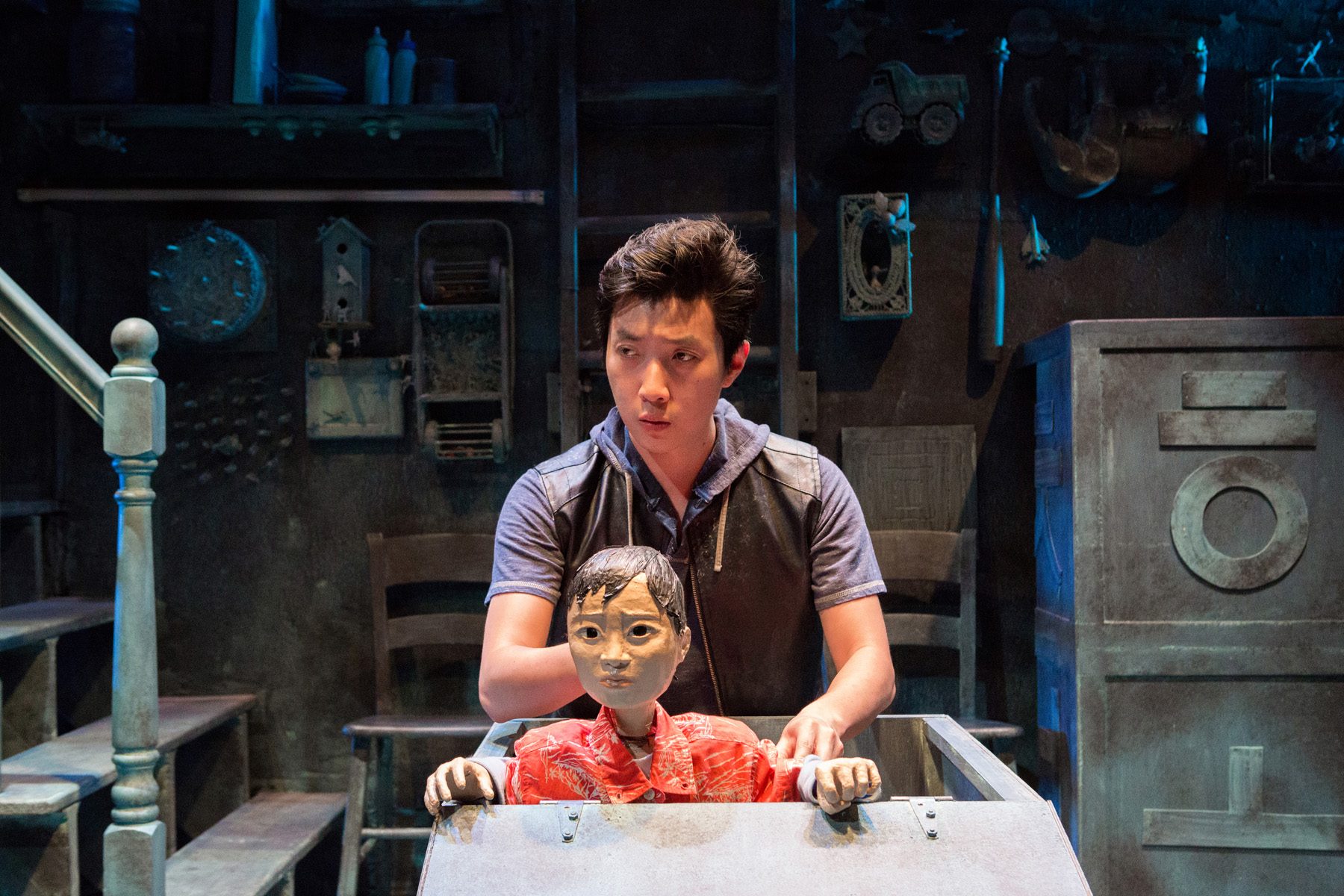 The Gift Theatre’s world premiere of Wolf Play by Hansol Jung is a close up look at the politics of adoption and their personal impact on the children and families involved. Wolf Play follows a short period of time in the life of an adopted boy (Dan Lin), billed as “Wolf”, but variably called “Peter” and “Jeenu”. When the boy is re-homed with a biracial lesbian couple after being adopted from Korea by a white straight couple, he leans into his identity as an abandoned wolf for guidance and comfort. The present day wolf narrates his story, and embodies the child wolf through a Bunraku-style puppet (Stephanie Diaz). As new family tensions and power dynamics unfurl around the wolf in his new environment we watch him adjust and calculate.

The shallow set clad in shades of blue, designed by Arnel Sanciano, is a great background for the personal and meta-theatrical nature of the play. A set of stairs weaves through the side of the set, leading to different places at different moments in the play. A ladder cuts through an almost Cubist back wall which holds pieces of different rooms in the two households. The organized, fragmented nature of the set disorients the audience in a way which feels sympathetic to the wolf’s experience. The blocking collaborates with the set to heighten this feeling of busy segmentation. Peter (Tim Martin), the wolf’s first adoptive father, weaves through his morning routine at the same time that his new adoptive mother Robin (Jennifer Glasse), her wife (Isa Arciniega), and her brother (Al’Jaleel McGhee) do. They trace the same paths but never collide. This production benefits greatly from director Jess McLeod’s dynamic ability to use space to create memorable visual moments.

The visual elements of the play also work together to focus the audience on the wolf’s experience, even when he doesn’t speak very much or have the ability to change the path of the plot. The wolf is at the center of the play because the other characters are forced to react to his presence, but he has little ability to take plot driving action. Dan Lin’s performance as the wolf helps the audience bridge the gap between the story told and the wolf’s experience. The older, non-puppet, wolf seems to live outside of time and outside of the story itself, and often addresses the audience. His very presence in the play seems to suggest that things work out okay for the little wolf, but his detached and confrontational tone seems to suggest otherwise.

The wolf prods the audience, he makes them self-conscious with direct address, and questions their motivations in coming to the theatre to watch the story he’s telling. Serving an almost Brechtian purpose, the wolf steps outside of the story not only to add context but to make the audience reconsider the way they’re processing the story.

Wolf Play touches many points in the debate around adoption, race, and class through inventive and emotional storytelling. Its approach to these topics is unique in how small and personal it feels, and the lengths it goes to defy the expectations of its audiences.

Wolf Play runs through August 15th at The Gift Theatre.