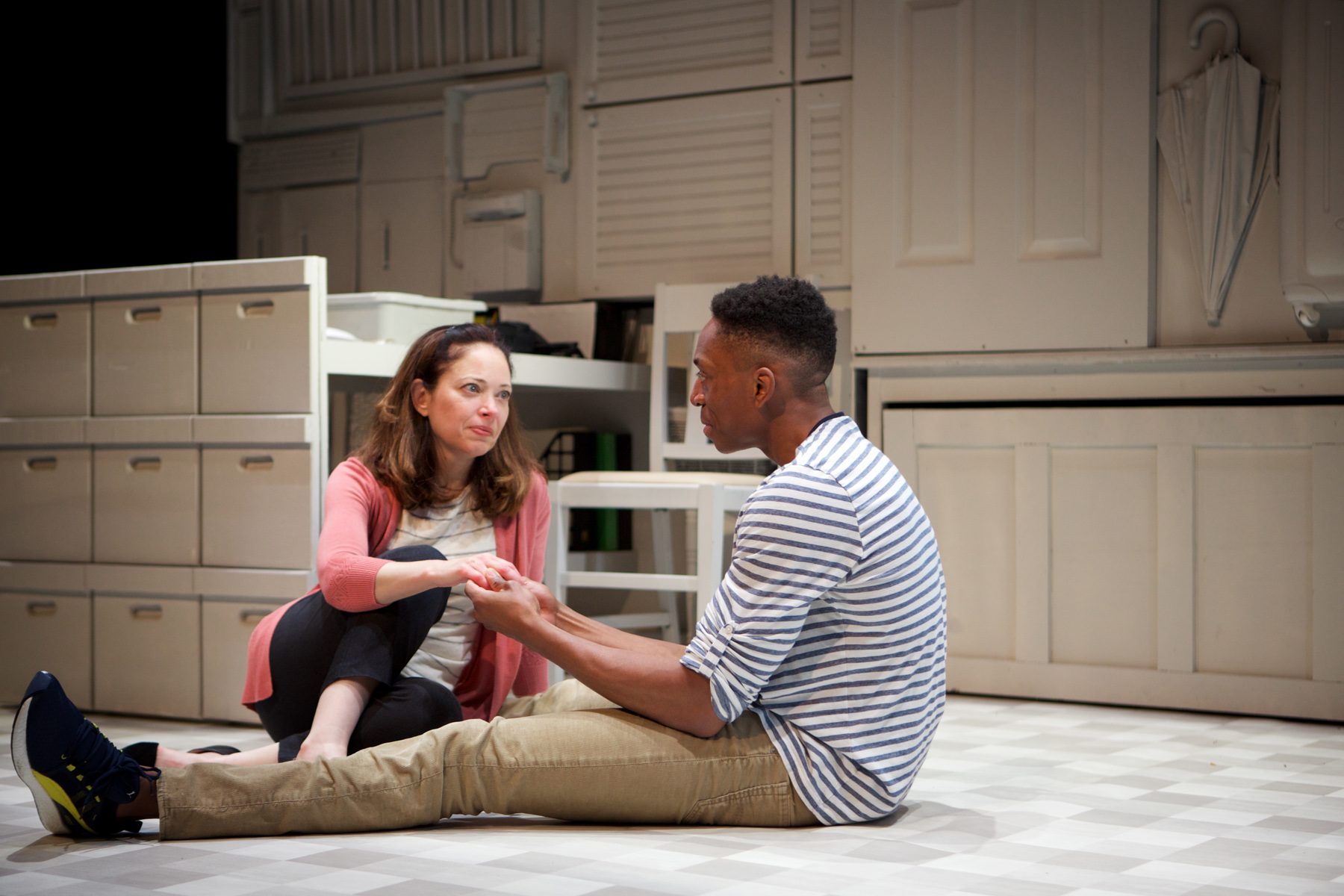 Something Clean by Selina Fillinger, tells the story of a woman trying to cope after her son is convicted and sent to prison on sexual assault charges. Produced by Sideshow Theatre Company and Rivendell Theatre Company in collaboration, directed by Lauren Shouse, Something Clean asks audiences to consider the trauma and attempts toward healing for the families of rapists.

We start the play with an extended moment of silence between Charlotte, played by Mary Cross, and her husband Doug, played by Guy Massey. Charlotte and Doug are struck trying to fathom the implications of their son’s assault against a backdrop of frozen and mounted household items washed in tan.

The set consists of light beige washed objects arranged in a neat two dimensional layer upstage of the acting space. It serves as a gentle reminder of all of the ways Charlotte and Doug’s lives have been touched. Different parts of the set jump forward, transforming, into full color areas taking us from one part of Charlotte’s life to another. The transitions from space to space are masterfully blocked to emphasize both a sense of chaos and dissociation in Charlotte’s relationships. Lighting (Diane D. Fairchild) and sound (Eric Backus) give us a sense of how Charlotte experiences different rooms and spaces. The unity of visual and emotional storytelling in this play is outstanding. All three actors deliver dynamic performances, and they never feel out of step with the world Shouse has created for them onstage.

As beautiful as it is, Something Clean, is fully committed in its focus on Charlotte’s trauma and need for healing. This tight lens feels inappropriate at times. In an attempt to heal and atone Charlotte begins volunteering at a local rape crisis and education center, while keeping her identity a secret. There, she makes friends with this only rape survivor in this play, a fiercely cheerful and loyal Black gay man named Joey. As Joey and Charlotte’s friendship develops and Charlotte learns more about the experiences of rape survivors, the play makes parallels between Charlotte’s experience and the experience of survivors. These potential parallels seem to be what the play is most interested in exploring.

There is so much value in interrogating the truly expansive way rape affects people’s lives and the society we live in, and this play does that in a way I haven’t really seen before. It does it lovingly, and it paints a beautiful path from pain to healing for Charlotte. But it is hard to swallow when Charlotte’s character development comes through the triggering of actual survivors like Joey, or through tiptoeing around the violent reality of her son’s actions.

That the rape in this play seems to be modeled heavily after the high profile case where Brock Turner, made Charlotte an even more difficult character for me to empathize with. When Doug has lines referencing the same “20 minutes” of bad decision making Brock Turner’s father does, it makes it much harder to accept his reconciliation with Charlotte. When Charlotte returns again and again to clean the dumpster where her son raped said woman, it made me think again and again about the real experience of the woman raped by Brock Turner, and wonder why Charlotte is focusing on the dumpster instead of the person affected. Charlotte briefly mentions and dismisses the fact that the student her son raped was a woman of color, and then never directly mentions that woman again. That made watching Charlotte reach acceptance of her son later that much less satisfying. The path Charlotte takes toward stability and reconciliation is in some ways the opposite of Joey’s development throughout the play. And Charlotte sows those seeds of disruption in Joey’s life. Charlotte and Doug are never unsympathetic, they don’t display the horribly defensive responses which parents of rapists often publicly do. At the same time when faced with the reality of a violent rape, though the the path they take toward healing and a more consensual relationship is a beautiful journey, it is not enough on its own to reconcile the other apparent harms.

Sideshow and Rivendell’s Something Clean offers good design, skillful acting, and an interesting story. Something Clean even offers a window into the experiences of rape survivors, and a chance to reflect on the ways one sexual assault can reverberate through the lives of many people. Despite this, there’s an absence in this play when it comes to considering survivors’ experiences and need for healing. Because of this, people with different experiences will inevitably see Something Clean completely differently. I can imagine people leaving this play feeling defensive, touched, indifferent or certainly, triggered. For me there wasn’t enough there but for other people this is exactly the story they can relate to and contend with. My hope is that as the list of stories we create about surviving and healing from rape grows, the scope of who those stories focus on and how they’re held can grow, so there are stories which can meet more of us where we’re at.