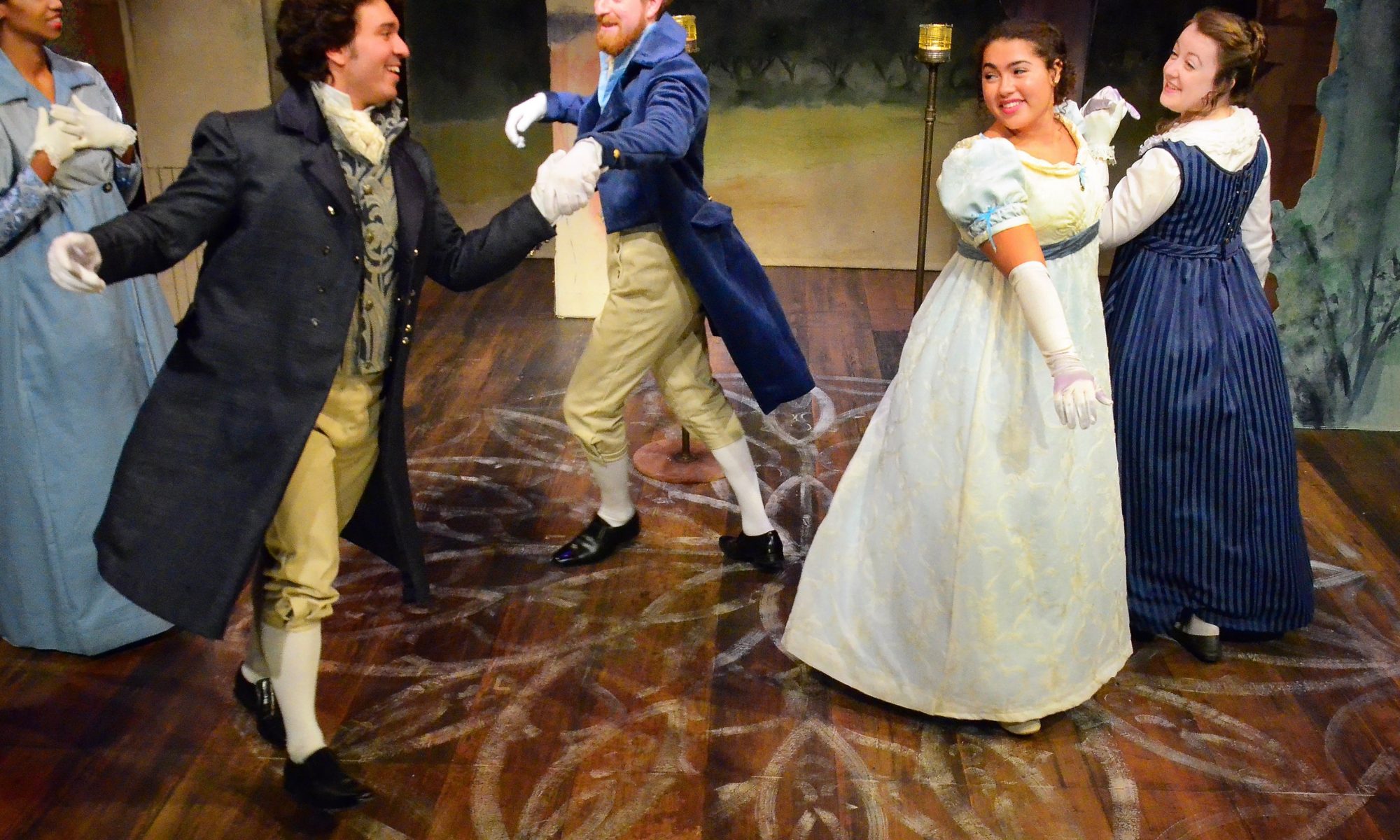 Phil Timberlake’s adaptation of Emma at Lifeline Theatre is an engaging and dynamic piece of work, directed with a clear hand by Elise Kauzlaric. Based on the Jane Eyre novel of the same name, Emma follows the protagonist of the same name as she matchmakes through her fictional English countryside community of Highbury. As she interferes in all of her neighbor’s love lives, she creates a big mess and must recognize the desires of her own inner heart in order to put everyone back together.

In Lifeline’s production, the story’s anchor is Emma (Emma Sipora Tyler), while the other four actors (Peter Gertas, Jeri Marshall, Madeline Pell, and in this production Royan Kent stepping in for Cory David Williamson’s track) play every other character. This is made possible through the director’s clear vision, every design element lends itself to the characters switching. The ornately painted set (Sarah Lewis) has a gorgeous false proscenium that is positioned about midway upstage, which gave the impression that the actors were breaking the fourth wall all throughout the show, forcing us to have an active role in the story. Full of arches and pillars, there were lots of nooks and crannies available for characters to pop in and out of, someone might turn a corner as Mr. Elton and emerge from the next as Mrs. Weston, a gift that kept on giving all night.

Persephone Lawrence’s props were the other essential component for the actors, a cane and handkerchief for Emma’s father, a fan for Mrs. Elton, and so on. In fact there were so many characters that sometimes the props became characters! A mannequin was used to represent old Mrs. Bates, one of the early gestures that successfully asks us to suspend our disbelief, and various standing lamps were party guests at various points in the play. Gesture as much as props were used to establish characters as well, and it makes you wonder what great fun this ensemble had creating their own physical language they had to transfer at the drop of a prop!

The original sound composition and design (Andrew Hansen) favored the world of the play, and the lighting by Diane Fairchild conducted us through gardens and ballrooms in transitions. Each transition was tight, props and actors moved but everything felt like it was a part of the storytelling, rather than actors pretending they can’t be seen and moving furniture as people. Aly Renee Amiei’s costuming also helped these characters be fluid. Emma was wearing the lightest color blue gown, but everyone else was in some fashion of blue proper British wear, effective for the budget size while still looking beautiful.

Overall, this show looks and feels a lot more expensive than it likely is, and the performances are just as rich. The ensemble makes a meal out of a story that could have been frivolous. The only reservation I had was about Emma herself, who is sometimes not given enough depth for us to care about this upper middle class woman meddling in others’ lives. If the title character were not a woman of color who was inherently interesting to watch, I am not sure there is enough space given to Emma’s emotions to invest properly in the text. That said, Emma Sipora Tyler is charming in this role, and on the night I was in attendance Royen Kent graciously stepped into this complex show and was riveting in the Mr. Knightley/Actor 2 track. It appears the company sought to update this story for modern audiences and reposition it where anyone is welcome to step into these characters that have affected so many of us, and I would say they have succeeded. A night at the theatre is well spent at Emma with this standout ensemble.

Emma runs at Lifeline Theatre and was recently extended to July 28th.