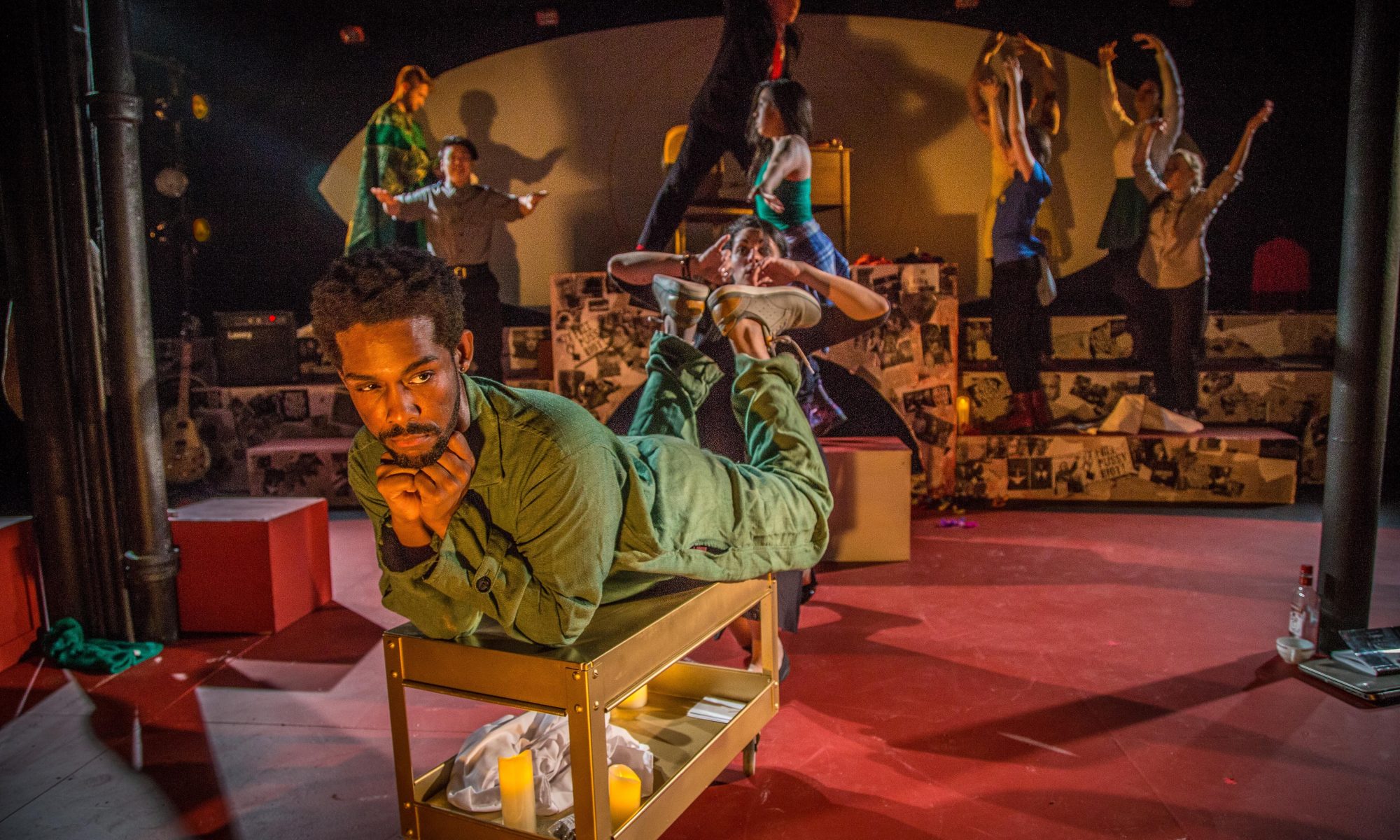 Who gets to write the story when our present becomes the past? Does that privilege fall to the global leaders, historians, celebrities, or the revolutionaries? We Are Pussy Riot (or) Everything is P.R. by Barbara Hammond documents this struggle for historical authorship by looking at a recent moment in time. Not too long ago, Pussy Riot went to trial for their public protest of the 2012 Russian election. Everyone seemed to have something to say, and the truth of the matter is still up for debate. Director Kate Hendrickson uses Red Tape Theatre’s intimate space as a communal square where the public record is laid bare in ferocious fashion. We Are Pussy Riot (or) Everything is P.R. is just as raucous, satirical, and tragic as the group itself.

Pussy Riot chose to make the site of their protest the Church of Christ the Savior. Scenic Designer Chris Popio makes a similar choice by having the set designed in the style of an altar vandalized and cluttered with “Free Pussy Riot” posters. At the top of the altar is a gilded all-seeing eye, at the center of which sits Casey Chapman, the actor playing Vladimir Putin Ann Sonneville is given the difficult task of keeping the space clean in her roles as “Devout Woman.” Sonneville follows the protesters around picking up after them and scrubbing away the filth, but this chore can only be maintained for so long. By the end of the production, vodka is spilled, papers are thrown, and blood has stained the world of the play.

The women of Pussy Riot become just as much as part of the altar as Vladamir Putin. Masha Alyokhina (Jalyn Greene), Katya Samutsevich (Stephanie Shum), and Nadya Tolokonnikova (Emily Nichelson) are constantly put on display, much like they were during the time of their trial. Greene, Shum, and Nichelson each bring something personal to these women who in reality, pursued anonymity. Kate Hendrickson’s direction reads between the lines of the public record from which much of the language in this play is pulled.

The members of Pussy Riot are not the only focus of the play. One of the most heart-wrenching perspectives shared belongs to Sergei (William Rose), the wrongfully imprisoned history professor. The play regularly breaks from the frenzy of the trial to check in with Sergei who sits in his jail cell withering away on hunger strike. William Rose delivers a gripping performance as the forgotten casualty. Sergei’s imprisonment haunts the media circus made of the Pussy Riot trial and grounds the chaotic production.

Other standouts include Red Tape company members Emilie Modaff and Nora King. Intentionally comedic moments can fall flat if not expertly executed. Such moments are in safe hands if Modaff or King are charged with the delivery. In their various roles, Emilie Modaff straddles that fine line between humor and sadism. Whether acting as members of the press, Marylin Monroe, or Madonna, the consistency with which Nora King jumps into these various voices of the West borders on athletic.

We Are Pussy Riot (or) Everything is P.R. has a strong awareness of its audience and the world outside the theater. The audience is just as involved in the writing of history as any of the players introduced on the stage. It is important to keep in mind that wrongful Russian imprisonment isn’t resigned to the past. Just this week investigative journalist Ivan Golunov was arrested on allegedly falsified drug charges. If convicted, he could spend the next 10 or 20 years in jail.  With yet another wonderful ensemble production, Red Tape doesn’t want you to forget your role in all of this. We all have a part to play.

We Are Pussy Riot (or) Everything is P.R. runs at Red Tape Theatre until July 6.