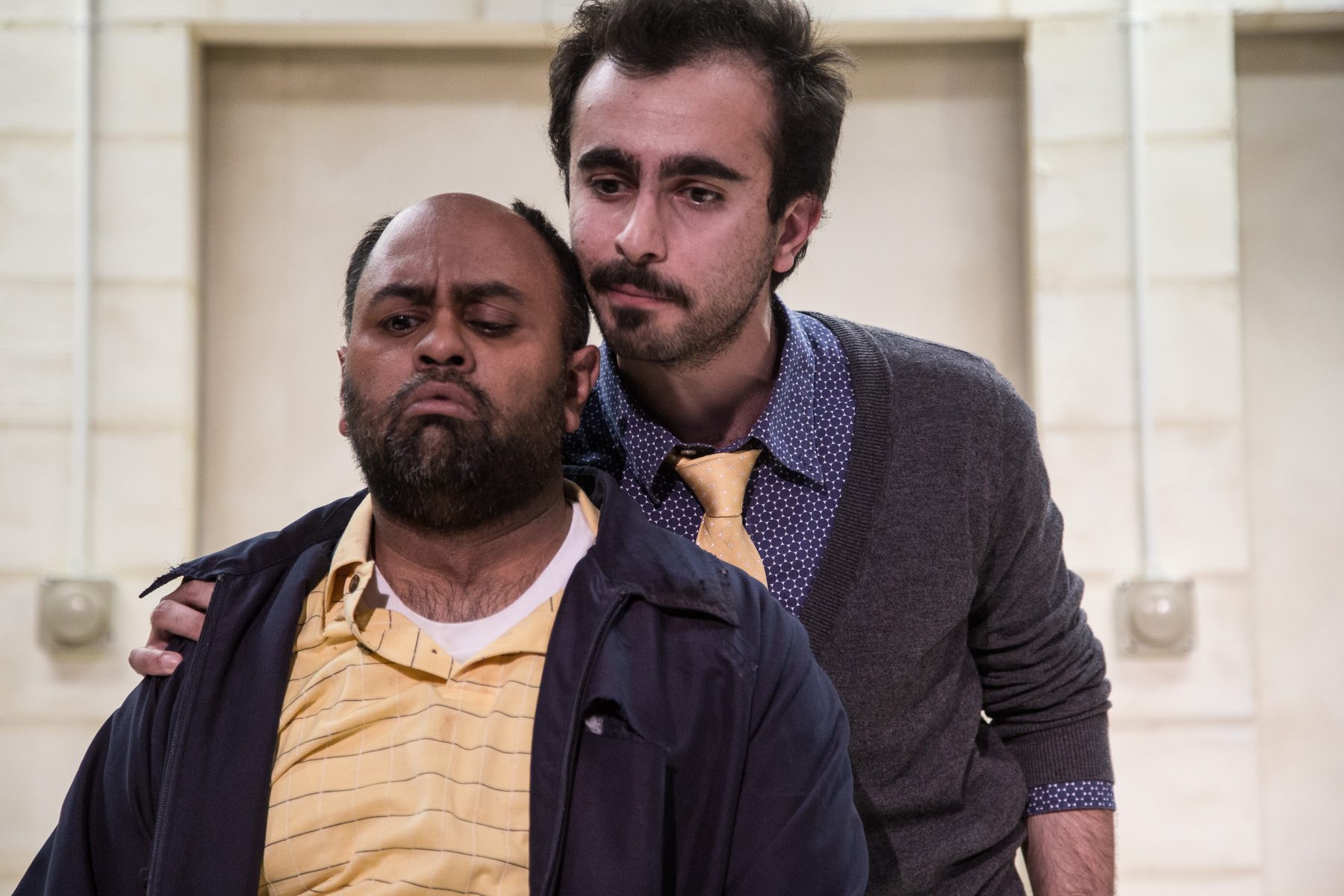 “Don’t be a stranger.” Like much of Yussef El Guindi’s darkly comedic Language Rooms, presented by Broken Nose Theatre, this common phrase is suddenly unsettling. Within the blank foreboding walls of a CIA blacksite, the familiar is made unfamiliar, and the mundane, dangerous. Director Kaiser Zaki Ahmed and his team mine El Guindi’s interrogation of islamophobia in a post 9/11 United States. The result is a potent examination of the current dark night of the soul in which the U.S. and its people presently find themselves.

What makes a citizen? The feeling of belonging? Loyalty to government and its systems? Acceptance into community? These and other questions abound as the audience moves through a bleak and horrifying landscape of locker rooms, interrogation rooms, storage rooms and rooms with far more sinister purposes. Translators Ahmed and Nasser, the only two Muslims in a high security U.S. intelligence facility, and partners in interrogation/torture navigate an increasingly hostile workplace, with Ahmed’s loyalty being called into question. To prove his loyalty to his superiors and his peers, Ahmed must pass an impossible test. Through the use of a highly successful ending metaphor, the entire creative team at Broken Nose delivers El Guindi’s final searing condemnation of the absurdity that is inherent in our culture of racist fear.

At the center of this paranoia is Salar Ardebili’s deeply conflicted Ahmed: eager to please, to prove himself and to be at peace. Ardebili, recently of Interrobang Theatre Project’s I Call My Brothers, has affirmed again that he is adept at portraying a character who is wrestling with the expectations of a society with nuance and texture. Ardebili is accompanied by Bassam Abdelfattah’s stoic and coiled Nasser, who is well practiced at chasing the benchmarks of acceptance. Abdelfattah embodies Nasser’s genuine concern for his friend, as well as his deep-seated anxiety about his position in the workplace culture of U.S. intelligence, balancing a a fraught combination. Bradford Stevens, a blasé and relentless supervisor Kevin, and Bilal Dardai’s fiercely protective and scorned father Samir complete a capable cast tasked with a difficult text. Dardai and Ardebili especially portray the acidic frustration and deep bitterness of dreams betrayed and of unrequited desires to belong.

Director Ahmed’s world of absurd horror unfolds on the gymnastic scenic design of Sotirios Livaditis, whose surprising and unsettling set tells its own story of doors and rooms to complement El Guindi’s. Accompanying Livaditis’ design is the sound design of Will Quam, at times frantic and scattered, and at others subtle and devastating. Props design by Charlotte Lastra created a sobering and at times bewildering reminder of the purpose of the rooms the actors inhabit, and the work that is done there. Costumes by Annaliese Voci, create an immediately recognizable impression of each of these characters, communicating through the use of color and fabric type. Lighting by Conchita Avitia heightened the sense of terror and foreboding that lives between the actors and in the set, with excellent use of silhouette, shadow, and fluorescent lighting. In a play set in an intelligence gathering facility, the talents of Fight & Intimacy Director Sasha Smith are well appreciated, and her choreography was especially felt during scenes of intense interrogation. Dialect Coach Vahishta Vafadari’s provided a welcome texture to the performance, especially in a play that focuses on translation and language.

El Guindi has crafted a layered probe into a highly secretive and deeply politicized world of intelligence gathering, and Director Ahmed and his team have risen to the occasion. Broken Nose’s production is clever, and full of welcome twists of humor in an otherwise crushing landscape of terror. Language Rooms is is a closely drawn labyrinth of cultural pitfalls that many marginalized people, and in this case specifically Muslims, face in the United States. How does one prove that they do in fact belong when it seems that the goal posts for acceptance are constantly moving? When there is no right answer, no way to be anything more than a stranger? El Guindi’s answer is devastating, and like many of the images of the United States’ most heinous transgressions, will stay with me for a long time.

*Note: Since my initial experience of this show and writing of the following review, leaders and artists in the Middle Eastern, North African and South Asian communities (MENASA) have been discussing the impact and implications of this production. Rescripted is committed to engaging with feedback and conversation, and as part of that commitment, I wrote a companion piece to this review you can read here that interrogates my initial response as a critic, and aims to give voice to those artists and their views. This review has not been edited from its initial publication draft.

Language Rooms ran April 19 – May 18 at the Den Theatre. All performances were Pay-What-You-Can.