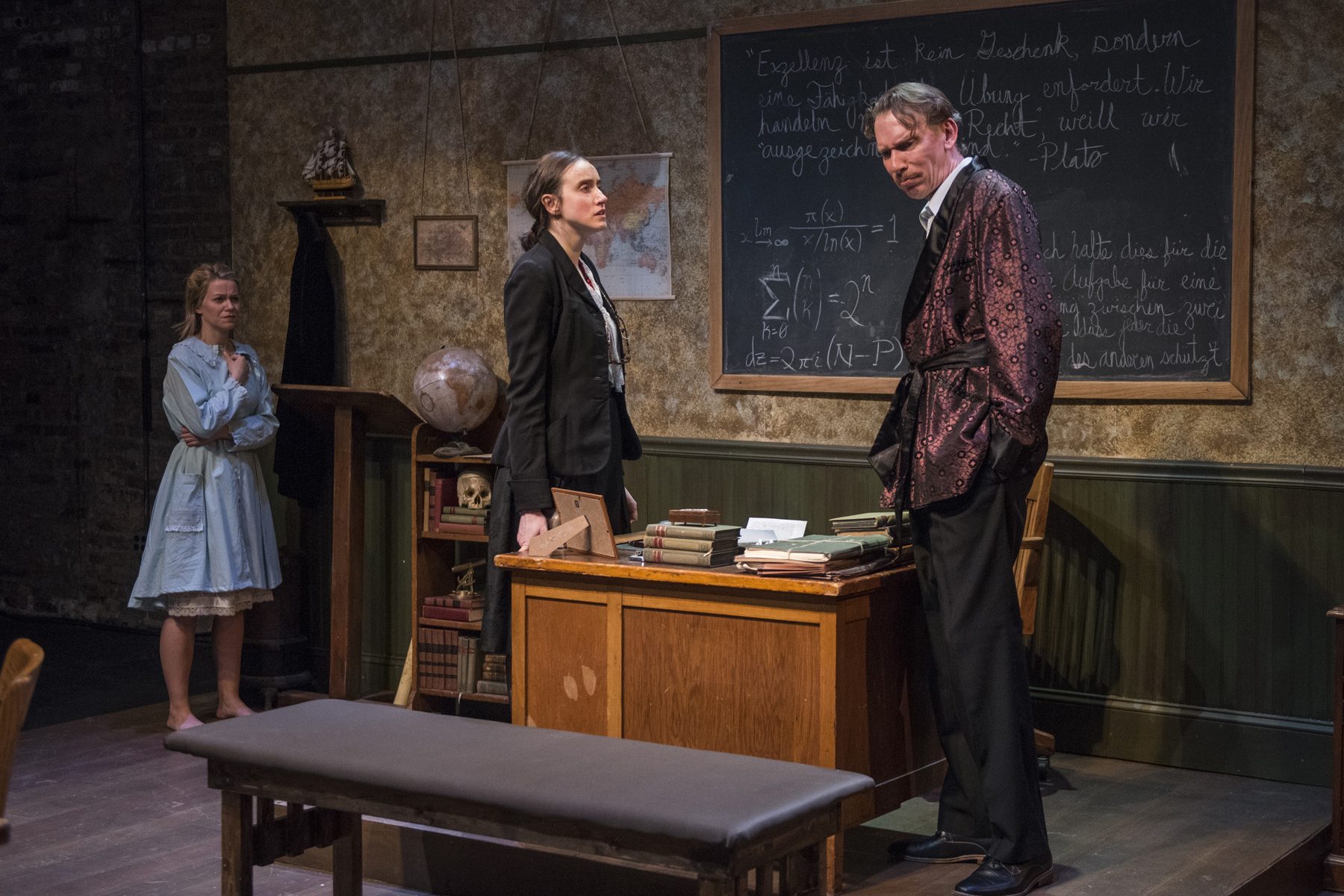 Debate plays are danger zones where the ploy to frame the “very fine people on both sides” can quickly fall flat and leave the audience with nothing else but the same arguments they are already bombarded with daily. Shattered Globe Theatre’s production of Hannah and Martin successfully presents a debate focused script without turning into trench warfare. The remarkable text by playwright Kate Fodor stands on its own two pillars of cerebral philosophizing and visceral desire. In his 24th collaboration with Shattered Globe Theatre, director Louis Contey leans on these two pillars to guide a willing audience into the gray area of a life or death debate.

This play, much like the title suggests, is about Hannah Ardent (Christina Gorman) and Martin Heidegger (Lawrence Grimm). Hannah is a young Jewish academic at the cusp of her career, Martin is her mentor and lover. Their already complicated relationship turns gruesome when Martin’s national pride for Germany allies him with the Nazi party. This relationship is a painful thing to watch. Martin Heidegger is condescending and emotionally abusive, but Lawrence Grimm makes a disgusting man hard to hate. He’s charming, and charm in the hands of a powerful man goes a long way. I’m now sympathetic to Hannah’s honest love for this figure. Desire might be the most physical manifestation of their relationship, but the love that Hannah and Martin share is built on respect — for each other’s intellect if nothing else.

The first-person narrative with which Hannah leads the play is a bit like a diary entry presented as a dissertation. Christina Gorman navigates an emotional minefield to present the facts and this tiptoeing pulls me to the edge of my seat. When will she step on a mine? When will all that built up pain and pleasure finally explode? We find out in act two during one of the longest uninterrupted scenes throughout the two hour and fifteen-minute production. Hannah and Martin meet for the last time on a philosophical battlefield in Heidegger’s home. Neither leaves unscathed. This scene is a thrilling directorial achievement by Louis Contey. I would probably understand only half of their arguments on paper. When verbalized in one of the most emotive moments of the play, their points come out loud and clear.

The intense weight of this text does not fall solely on the two title characters. An extremely talented ensemble grounds the production and keeps the debate from floating up and away to that cerebral realm. Alice (Jazzma Pryor), Hannah’s mentee, confronts the professor on her decision to support Martin’s return to academia. This face-off parallels the one just witnessed in Heidegger’s home and Jazzma Pryor performs that foil wonderfully without any hue of righteous indignation. Steve Peebles adds much-needed laughter to the stage as Gunther Stern, Hannah’s supportive husband by convenience. Cortney McKenna takes on the unique role as Martin’s wife, Elfride Heidegger. McKenna’s precision avoids vilifying her character, even when playing the imagined version concocted by Hannah at several points in the play.

The debate focused script is reflected in the production’s staging. The audience sits on either side of the alley configuration, literally pitted against one another. Scenic designer Nick Mozak achieves 20th-century scholastic masculinity with the stationary schoolroom set. The almost musky wood tones compliment the collection of academic artifacts: chalkboards, maps, human bones. In this way, Martin Heidegger’s influence is in everything. The light design (Simean Carpenter) and sound (Christopher Kriz) travel to additional locations not provided by the set. Hailey Rakowiecki’s costuming plays a large role in character relationships. Many crucial character interactions are prompted by the observation of costume pieces be that Hannah’s blouse or Gunther’s apron.

Hannah and Martin contains so much that is relevant to the current moment: the #MeToo movement, cancel culture, the rise of neo-nationalism. Shattered Globe Theatre’s production dives into this subject matter with a purpose and without fear. At a day and age where arguments are inescapable, Hannah and Martin brings back debate that is meaningful.

Hannah and Martin produced by Shattered Globe Theatre runs at Theater Wit through May 25th.