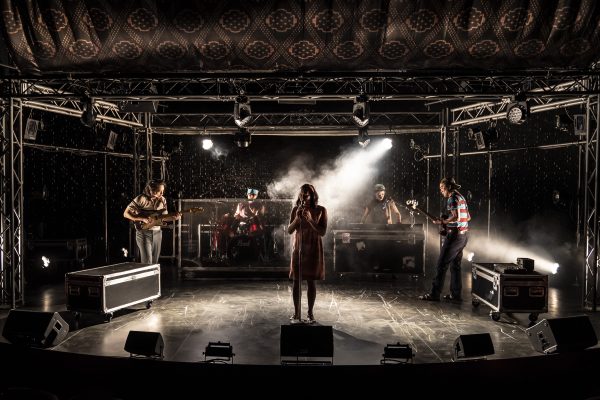 Cambodian Rock Band written by Lauren Yee, is directed by Marti Lyons at Victory Gardens. The premise of the play is in the name, but the show encompasses so much more depth than the careers of a rock band. It’s about the trauma of genocide in Cambodia, family dynamics, and how one can repair themselves through music.

The first act of the show starts off slow as it lacks character development and conflict, as the writing focuses in on a father and daughter relationship that is given no real importance through the rest of the narrative. The second half more than makes up for it with a change in tone that is both upbeat and disturbingly bleak. The actors also do well in keeping up the energy and emotion in both acts, despite most of the first half being unimportant to the overall plot. This second half is where the play takes off, and it’s where the energy really seems to reverberate off the actors and into the audience. As the character, Duch (pronounced Doik) states “once you’ve got them in their seats who will challenge you, put the lights and music on and you’ll be surprised what you can do.” He’s not wrong as the play turns from happy to disturbing in a matter of minutes, making the audience put together the pieces of what is real and artificial in the story woven between the narrator (Rammel Chan as Duch) and the main protagonist (Greg Watanabe as Chum).

The set and props, designed by Yu Shibagaki and Nova Grayson Casillo, is unique in it’s a simple concert hall design with haze and smoke. Not only does this make it flexible for the actors to move around, but it’s an impressive feat for a smaller venue. The impressive tech elements don’t stop there as the set and lighting is seamlessly able to become multiple locations without changing too much (Keith Parham and Megan Turnquist). These elements work organically with the show, just as easily as the use of instruments onstage.

The ensemble deserves mention: Rammel Chan (Duch), Eileen Doan (Pou/Guard), Peter Sipla (Rom/Journalist/Drums), Greg Watanabe (Chum), Aja Wiltshire (Neary/Sothea), and Matthew Yee (Leng/Ted/Guitar). They not only give an energizing performance but bring raw emotion to the stage. The actors seamlessly blend moments of pain with little pleasures, making their characters feel alive. Each actor also plays instruments and sings live on stage, featuring songs by Dengue Fever, and there’s something extremely electrifying in that. This is aided by the sound design, by Mikhail Fiksel, who supports show’s moments of extreme silence while providing buoyancy for the high energy ones.

I didn’t expect to walk out of the show smiling, but as I left the theatre I felt hopeful. While the show itself has grim tones and very difficult scenes of violence, it manages to project a theme of healing from trauma. A feeling that somehow we each may be able to come to terms to find true selves amongst trauma that’s bigger than ourselves. The characters in the show are suffering from many forms of hurt, but it’s how they rely on each other and the therapy of music that makes it feel hopeful and healing in a sense. The show doesn’t give solutions to the theme of hurt, but it does portray the various ways humans cope.

Victory Gardens and Lauren Yee have done something special with this show. Lately, there has been a trend of excusing a lack of diversity because finding casting for actors of color needed for certain shows is “too difficult”. Victory Gardens manages to put all those who make these false claims to shame (casting by Kanomé Jones). It is wonderful to see a cast of highly skilled people of color onstage, which makes audience members like myself crave more casting and show choices like this.