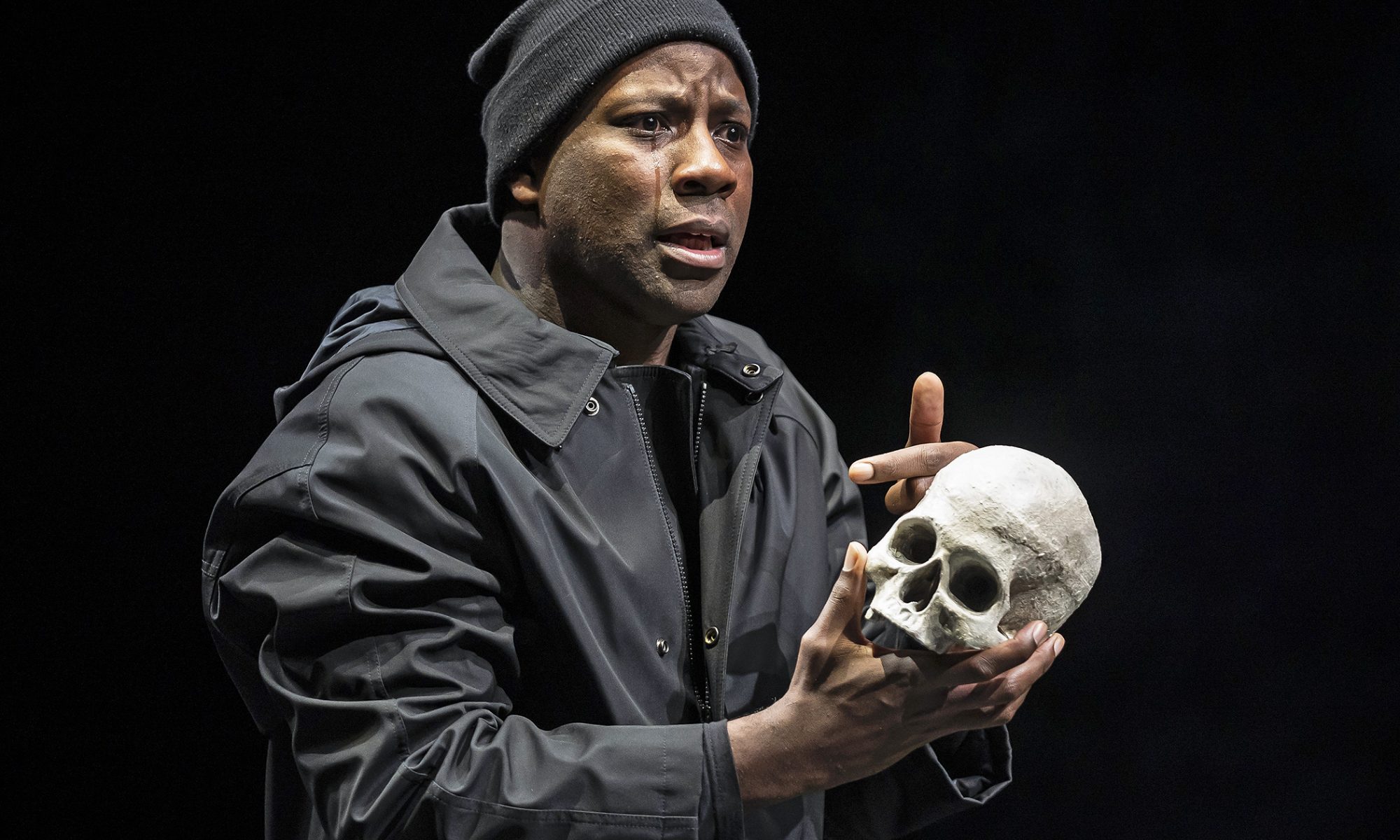 Chicago Shakespeare Theater’s production of Hamlet introduces the Prince of Denmark (Maurice Jones) as a man standing at the foot of his father’s grave. The rain pours down and this macabre image resembles a superhero origin story. Only Hamlet is no hero. This revenge story has casualties. Barbara Gaines directs a massively skilled cast of players with nuance, intimacy, and the occasional dramatic flare.

Hamlet is sent down the path for revenge after an otherworldly encounter with his father’s ghost. Spellbinding projection design by Mike Tutaj transforms the figure of Derrick Lee Weeden into a towering paranormal presence. This phantasmic image is the only design moment with this kind of magnitude. The effect is immediate. Maurice Jones is notably shaken and spends the rest of the production trying to put the world back together. This approach to Hamlet’s ‘madness’ from Jones is almost surgical. Every decision made, every word spoken, every step placed is done with extreme care. The microscopic attention paid by Jones’ Hamlet has difficulty filling the large and open theatre. It begs the audience, to look more closely instead.

Madness on Ophelia (Rachel Nicks) looks very different. While Hamlet is trying to make sense of it all, Ophelia completely separates herself from reality after the death of her father. Rachel Nicks explores almost every human emotion to its fullest extent within a minute. The costume design by Susan E. Mickey assists in Ophelia’s division from sanity. Her hair is distressed, her skirt is torn, and she is wearing her father’s blood-stained shirt. It is notable that ‘madness’ on a man is understated and natural, while the woman resigns herself to hysteria. This gendered representation of madness plays out in a tragically short-lived yet memorable performance by Rachel Nicks.

This entire production glimmers with shining performances from a number of players. Hamlet is a dark play and finding the laughter is a necessity. Several actors deliver that much-needed release. Larry Yando’s Polonius is the ultimate embarrassing dad and Sean Allan Krill is a grounded Horatio with a sharp sense of humor. The most satisfying pallet cleanser is found in Mike Nussbaum as the gravedigger. His stage presence is instantly calming and his command of the scene from a folding chair is a delightful change of pace from Hamlet’s overall intensity. A manifestation of that intensity is reserved for an explosive moment from Karen Aldridge as Gertrude. The otherwise self-contained queen fights back against her aggressive son. Hamlet has underestimated Gertrude’s own grief and power. We all have. Karen Aldridge proves everyone wrong.

Barbara Gaines’ Hamlet puts the emphasis on language. A mostly black and bare stage places the actors at the center of the audiences’ attention. Hamlet’s famous “to be or not to be” monologue is just Maurice Jones standing on the blackened space which ironically shines a light on the text. Simple yet impactful design choices occasionally nod to location and emotional state. One such moment is when Ophelia glides along the stage with a strip of blue fabric trailing behind her. This fabric then becomes a creek that Ophelia and Laertes (Paul Deo, Jr.) tip-toe around. This use of design provides a beautiful scene change, a firm location, and foreshadows Ophelia’s fate. Scenic design by Scott Davis paired with structured lighting design by Robert Wierzel offers many design elements that are both practical as well as emotionally informative. It is just a shame that some of these impactful choices are not revisited.

Hamlet is a play with culturally pervasive iconography. The image of a man holding a skull instantly brings to mind not just Shakespeare, but the art of  the theatre. Barbara Gaines takes on this iconography and provides some meaningful imagery all her own. There are some beautifully crafted stage pictures, yet it is clear that the production leans heavily on the skilled cast. In this case, that is an excellent decision. There is an ownership of character on stage that is difficult to find with plays that have such a deep production history. Chicago Shakespeare Theatre has now added a truly original Hamlet to that rich archive.

One Reply to “Minimal, Striking ‘Hamlet’ Gives Method to the Madness at Chicago Shakespeare Theater”