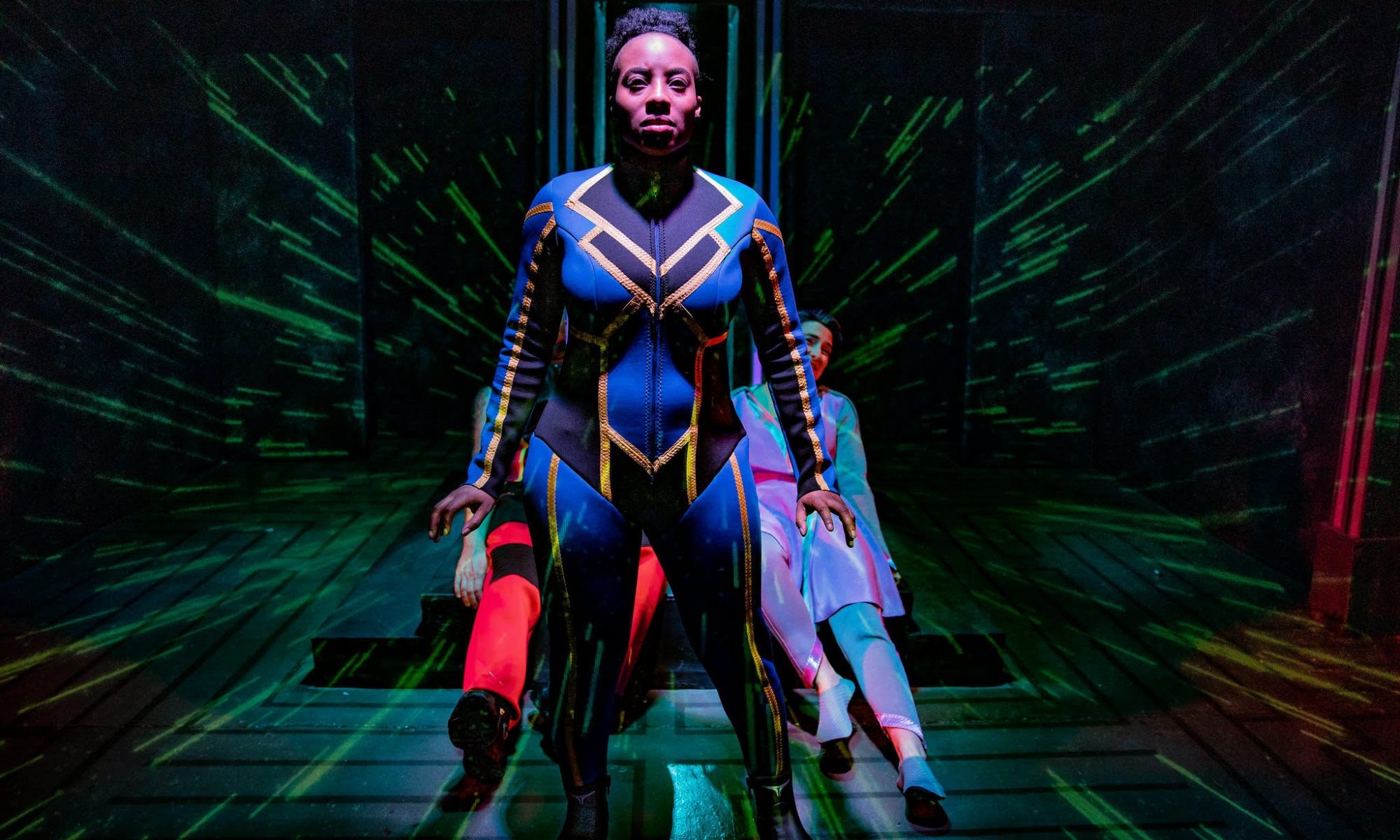 Elizabeth Ann Michaela Keel’s Corona takes place on a beautiful set designed by Hannah Beaudry; squarish, obsidian walls, accented with vibrantly lit-up panels that shine with different garish colors throughout. A raised white dais, which looks equal parts marble and futuristic, rises from the stage’s middle and invokes our collective idea of what a starship bridge looks like without mimicking it outright. In addition, right away we are treated to brilliant projections and lighting design from Claire Sangster; the contrast of the black set with monochromatic floods of blue, or pink, or orange create a lovely, spooky, and (pardon the pun) otherworldly feel. In director Tiffany Keane Schaefer’s production, the back wall and side panels show projections of stars and nebulae as they slowly drift by.

As the play begins, we quickly meet Captain Ariadne (Stephanie Mattos), who has just arrived on the planet Athens to pick up a shipment of human sacrifices. Her own planet, Crete, has forged a treaty with Athens in which fourteen unlucky Athenian citizens are periodically taken to Crete and fed to a horrible creature known as the Minotaur, in exchange for a shaky peace between the two governments. We meet two of the fourteen; the nervous yet wiley doctor Pneuma (Gaby Fernandez), who must reckon with this interruption to her meticulously planned life, and the cocky and confident Prince Theseus (Bill Gordon), who suspects that there’s more to the situation than meets the eye. As Ariadne’s story begins to crack under inspection, tensions grow higher as the spaceship makes its slow journey back to Crete — and the ship’s computer, Dyo (a delightfully creepy Scott Olson), begins acting increasingly suspicious.

It might seem at first glance that the original Greek myth has just been transplanted onto a sci-fi setting without much change. Playwright Elizabeth Ann Michaela Keel has an interesting challenge here; to take a cool-sounding premise (the Ariadne myth, in spaaaaace!) and make it rise above the gimmick.

And indeed, the first part of the script suffers from a problem that plagues much science fiction theatre; that of alienation. There is no clunky sequence to exposit the world we’re in or how we got here — and this is a wise decision, as it keeps the action moving. But it has the side effect of making the audience feel dropped into an unfamiliar place, a bit lost, a bit confused. The dialogue is heightened and exaggerated; the language these characters use is distinct from our universe, which is good, but is sometimes very clunky. I didn’t mind this too much after a while, however, because director Tiffany Keene Schaefer and the cast have taken great pains to keep the characters grounded.

Gaby Fernandez as Pneuma, in particular, does a lovely job as the audience insert character — thrust into a new and scary situation, she is the one forced to ask questions and react to the larger-than-life antics of those around her. She plays Pneuma as very nervous and quirky, with plenty of spot-on comedic moments, but shifts into having nerves of steel when the situation calls for it. In addition, Bill Gordon is eminently lovable as the cocky jock-with-a-heart-of-gold Prince Theseus, who inspires Ariadne to uncover the truth about herself with his overconfident antics. And Scott Olson steals every scene, as he sits in the back in a light-up jumpsuit as the ship’s artificial intelligence Dyo — carefully watching every character, giving their questions only sly half-replies, and quietly manipulating events with a wry smile, in a very clear homage to HAL-9000.

But it is Stephanie Matto, as our Princess of Crete and/or starship captain, who gives the show its backbone here. She plays Ariadne as a powerful figure plagued with self-doubt, struggling to maintain a facade of toughness in the face of constant challenges to her authority. It is she who must realize that she’s been lied to all her life — and therefore, it’s in her character arc that some of the themes unique to this adaptation of the myth shine through.

On this interstellar journey towards the “labyrinth” on planet Crete, the claustrophobic feeling inherent to space travel becomes more prevalent as the story unfolds. With the ship’s dark, winding hallways, Dyo’s leering HAL-9000-like presence, and horrifying fate that awaits them at their destination, the truest labyrinth may be the one in which our characters are already find themselves. In addition, 2001’s theme of computers that lie to us, that control our perceptions in ways we’re not even aware of, is more relevant than ever and is quite richly explored here. At its core, Corona is a tale of Ariadne catching a tiny glimpse of the gargantuan forces that have controlled her life without her knowledge — and for the first time, seizing control of her fate.

At just about an hour long, Corona feels like a brief glimpse into a lovely, dark, and strange world that feels like a place you saw in a dream one time. With its tense and mesmerizing atmosphere, razor-sharp themes about agency and control, and unique visual style, it’s an absolute must-see.

Corona runs at Otherworld Theatre Company through May 15th.