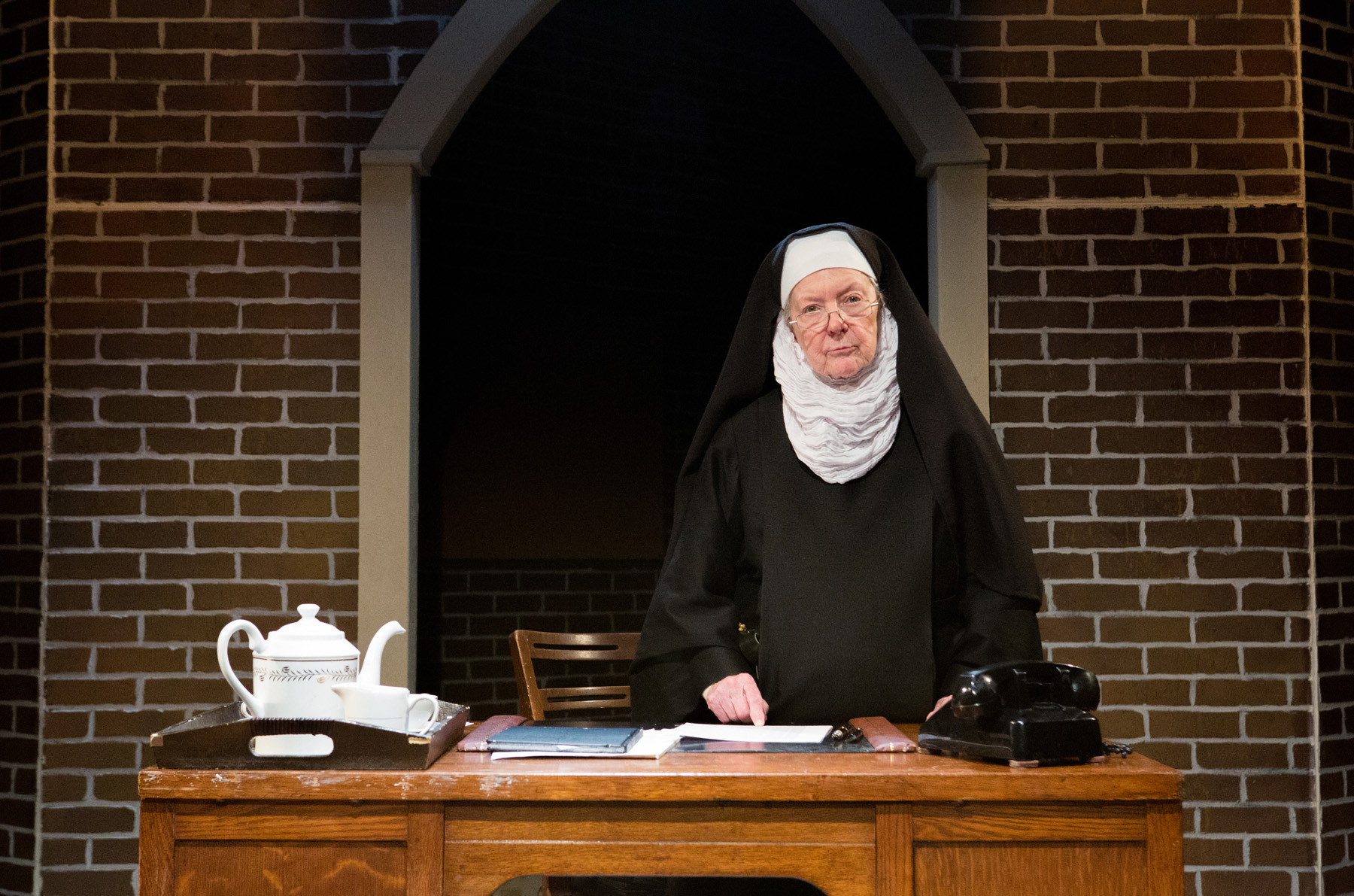 We’re baaaaaaack. Much like Johnny in The Shining y’all don’t know how to quit. This is the third installment in “Dear White Critics,” the series that never should have been, and unfortunately it focuses on a couple of beloved Chicago critics who each made a really offensive judgement call in different ways. Doubt presented by the Gift Theatre is a formidable production, please see my full review of that enthralling piece of theatre by clicking here. Many critics enjoyed the show, but some critics decided to focus on the fact that Mary Ann Thebus was holding a script for her performance due to a side-effect of medication that made memorization difficult. Then a storm of ageism, sexism, and ableism was unleashed on Chicago courtesy of primarily Chris Jones at the Chicago Tribune.

When I first read Chris Jones’ review of Doubt I was frankly, enraged. Jones begins his review of a four person play starring a fantastic actress by speaking highly of a male actor, Mike Nussbaum, then first refers to Mary Ann Thebus not by name, but “as the second oldest working Chicago actor with a union card..” In rapid succession Jones mentions Thebus’ age, generally refers to her career on the stage, and then delays speaking of her success onstage to note her accomplishments also include nurturing – giving birth to a successful child and teaching other actors. Only then are we given a single paragraph dedicated to the illustrious career of Mary Ann Thebus. There are more paragraphs in this review about Mike Nussbaum’s career than Mary Ann Thebus’ career. Mike Nussbaum is cool, but Mike Nussbaum is not in this show.

Immediately we descend into what I believe is a deeply unfair and frankly discriminatory and dismissive critique of Thebus’ performance. Actors’ consistently have different reasons for having assistance with lines in performance, which we give them, because they are too damn good to sacrifice the performance because of a small thing they can act around anyway. Jones puzzlingly claims that actors who read lines onstage are mocked “when it fails them. Mocked by the young, anyway.”

It is interesting how Jones manages to blame millennials for a problem he himself is creating, citing later a student group that looked confused to corroborate his own personal feelings about Thebus’ performance. Doubt is a deeply troubling parable about an inappropriate relationship between a perceived mentor and child, I would be worried the production was a failure if students did not look concerned or confused.

Jones relies on no less than three accounts of straight up gossip and perceived shared looks to report on this piece, including the inferred look from students he does not know. Students who may or may not even BE students, again he doesn’t even know these people.

“I missed the opening night of ‘Doubt,’ leading another critic in town to ask me if I had decided to recuse the show from criticism…” – Chris Jones, Chicago Tribune.

Oh, really? So all the critics in town are equally disturbed by this? Because every review I could find apart from yours and Kris Vire’s on his personal page Storefront Rebellion ranged from inquisitive to glowing so that really narrows down who you could have been talking to, Jones, and I just hope it wasn’t Vire because I really believe he knows better.  In fact Vire’s stance on holding a script really surprised me since he is arguably much more connected to and respected by the community.

“…I shared a glance with someone I know, a close friend of the actress, a pained silent communication from another seating section that said, ‘What on earth are you going to say?’” – Chris Jones.

This sentence tells me that a patron looked at Chris Jones during the play, worried about what he was going to say. Having been in the audience for a lot of plays Chris Jones reviews I know this look. It is the look a frightened dog shoots at its owner, praying this time they won’t get hit. Did it not occur to you they were not worried about Mary Ann, but rather after years of reading your writing they were worried you were going to say something wildly inappropriate and tank the show through your misunderstanding? Especially since you are clearly scanning the audience for reactions more than watching the play. It’s the look I shot at the back of your head during Breach at Victory Gardens as I watched you watch the audience, knowing you would not understand the lived experience of this play. And you know what Chris, that is okay. We don’t have to be experts on everything, we can only speak from our own viewpoints. It’s not about shying away from a bad review it’s about ensuring you are writing a review that’s in conversation with what is actually happening onstage and what the company is trying to communicate. If your viewpoint is likely going to be offensive or misrepresent a show because you don’t understand the work, then just don’t write about it, the same way you’ve apparently decided to never write about Free Street Theater (what’s that about anyway?).

Jones asserts an intimacy and knowledge of Mary Ann Thebus’ career and personal life that truly befuddled me as a critic. I did not see anywhere in the press kit that Mary Ann was 86 years old, nor that this show was happening at “considerable cost to herself” as was so asserted. Juxtaposing this strange familiarity is this statement:

“Critics can’t call actors to ask how or if they would like to be reviewed. So, finally, this critic arrived at just trying to write a column about, well, his doubts, especially since he suspected this likely was Thebus’ last role on a Chicago stage, a capper to a most incredible career.”

He suspected “this likely was Thebus’ last role on a Chicago stage.” But you didn’t call her – which, by the way is a totally normal thing for a journalist to do if you have a real question – so how do you know this is her last role? It’s misogynistic bullsh*t for a man to dictate when a woman has reached the peak of her usefulness. I wouldn’t dare say that about Mary Ann Thebus because frankly, reading or not, I couldn’t help thinking this nun would kick my butt if I went to this school.

The Chicago many of us live in is filled with young people, older people, able-bodied and differently abled people, all sorts of people. Our theatre community has expressed loud and clear its desire to see ALL storytellers onstage, and yet when The Gift does so with impeccable fluidity – Thebus is actually off book for chunks of the play and never misses a joke or pacing – it is dismissed by our most prominent theatre critics.

There are people – I like to think most of us – who walk into that show and see Thornton teaching basketball in his chair and Thebus reading him to filth over her script and understand we are seeing something truly special. We are witnessing some of our city’s greatest actors achieving their full potential unfettered. Then there is a person – Chris – who walks into that space and cannot get over the fact that someone would dare hold a piece of paper while telling a story long enough to listen. It’s baffling because Kris Vire in his Storefront Rebellion review even mentions having a conversation with Thornton after the show. Thornton rightfully asserts that Thebus has as much a right to hold her script as he does to be in his chair – and he still called it an “exercise,” and questioned The Gift’s right to charge for tickets. As though her performance is literally worth less.

It would be very easy to dismiss this as two prominent white critics saying something insidious, but if we don’t call it out every single time we will accept it as our normal. The ego,  separation from community, and unwillingness to listen to that same community exhibited here is unacceptable. A critic is not above community they are in dialogue with it. There are so many talented critics writing on theatre, such as Irene Hsiao’s take for New City Stage, that we should no longer have to hope one person at the Tribune will understand our work to sell tickets. In fact, I think that time may be passing as we speak.

Jones should frankly make the phone call he was afraid to make, and apologize to Mary Ann Thebus. He severely crossed a line by bringing up her age, suggesting this is the end of her career, suggesting Chicago artists & critics are gossiping about her age, being ableist, focusing on a man instead of her own achievements, and more – but that should get you started.

*Note: Dear White Critics is a series Regina Victor is tired of writing. While they are somewhat playful in writing, that is because these pieces are significant emotional labor, and sometimes the only way to deal with blatant disrespect like this is to laugh. Support local artists and grassroots criticism so Regina doesn’t have to be so tired. Thanks.

**Bias Alert: Regina Victor is a working artist with feelings, and also worked with Jessica Thebus two years ago, in addition to directing a short piece for her and Lisa Portes’ event rock the vote event, Femme Shout. They have no personal relationship with Mary Ann Thebus.

5 Replies to “Dear White Critics: I ‘Doubt’ You Meant to be Ableist…”