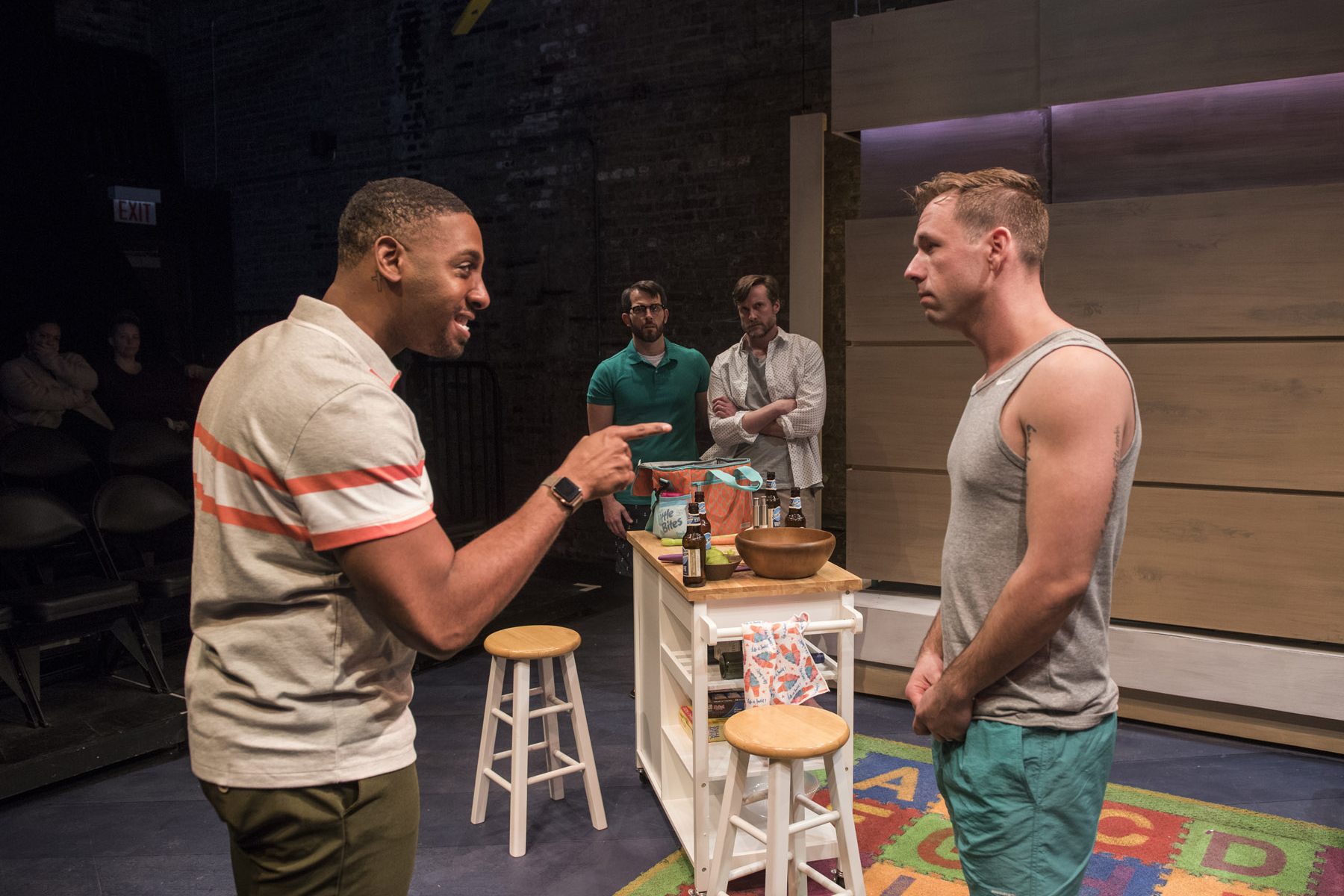 Our present moment invites more conversations than ever about the kind of world we want to live in and whether the behaviors of our predecessors is worth emulating. Dada Woof Papa Hot, Peter Parnell’s rather absurdly named play, asks some very straightforward questions about American home life and the value of the nuclear family. The playwright uses the lens of sets of two sets of gay dads who have young children in the same school. They decide to be couple friends and try to use their bond to navigate fatherhood and their relationships together.

Keira Fromm directs this piece for About Face, and there is certainly a container for the show visible in the playground-esque block tower and hanging colored beams (set by William Boles). In the past I have been astounded by Fromm’s swift and story serving transitions as I was in Bright Half Life, but here that element is missing as some transitions threaten to halt the momentum of the play. The sound design by Christopher Kriz and light landscapes of Claire Chrzan help to guide us through these moments without getting too stuck. Given some of the language the actors must fight against in the script (the word “quite” is used to excess), it feels as though Fromm’s focus was largely on helping the actors communicate the core messages of the script, and here Fromm is very successful.

Despite the Parnell’s tendency to lean into language that doesn’t feel natural, the actors manage exemplary performances that keep the play moving. Interracial couple Scott (Jos N. Banks) and Jason (a seductive and wily Shane Kenyon) are the younger of the two sets of dads. Scott is a conservative Republican in finance with dubious business ties. A recognizable archetype in today’s world, casting Banks who is African-American lent a complexity that would have otherwise been lost on this character. Blending authenticity of emotion and a well-placed ferocious entitlement, Banks’ spats with Kenyon truly come alive.

It’s often alluded to that perhaps Jason, Scott’s husband, would have preferred to be gay before marriage was legal, when cruising was the norm and relationships took any structure that functioned for the participants. Generally speaking, it is perceived as a time when gay culture felt less pressure to exist inside a heteronormative bubble. Alan ( Bruch Reed) is married to Rob (an emphatic and earnest Benjamin Sprunger), and together they have a young daughter Nicola, who is the light of Alan’s life. It is Rob’s relationship with his daughter that for me packs the most emotional punch in the show. There is a heart wrenching moment where she screams for Daddy, and Reed tries to answer the call only to be soundly rejected, she prefers her other Daddy.

The plot of Dada Woof Papa Hot is juicy, sexy, and sometimes heart-wrenching. It is impossible to talk about the effervescent and hilarious Lily Mojekwu as Serena, or her well-meaning and hopelessly selfish playwright theatre husband (Keith Kupferer) without ruining some of the twists and turns. However, their chemistry is lovely and some of the jabs Parnell takes at playwrights and their creative process were appreciated by the opening night audience. In one particularly fantastic scene, Reed and Kupferer talk to another parent from the school, Julia (Rachel Sullivan), an aspiring actress who’s just booked a Netflix show. Sullivan’s Julia is pointed and haughty, yet relatable and funny, her character certainly pokes fun at theatre makers in the way only a playwright can. Each scene is so intimate you almost forget how many actors are in this play, again showing Fromm’s skill at directing human connections the audience can feel.

Queer life today is complicated by many things: the expectation of legal marriage, children, family acceptance, and the law. As we continue down the garbage path our nation is on, it is worthwhile to genuinely evaluate what pieces of tradition we actually want to reinforce or emulate, and what is best left in the past. I commend Parnell for raising these questions and putting two a queer couples at the forefront of this family drama. Dada Woof Papa Hot is an earnest investigation of the value of traditions, featuring some truly compelling performances.

Dada Woof Papa Hot is produced by About Face and runs at Theatre Wit through February 16, 2019.