Get to know Sierra Carlson, a recent Alumni of The Key Young Critics Mentorship Program! Each writer wrote a multimedia review about a piece of pop culture currently capturing their imagination that you can read at the end of Sierra’s profile. We’d like to thank Angelica Jade Bastien at Vulture for sharing her insights on media reviewing with us. Check out more of Sierra and her cohort’s writing in our Key Reviews section! 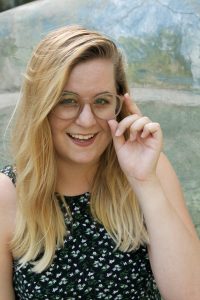 What are your artistic disciplines?: Dramaturg, Writer, Director, Writer

What “lenses” do you bring with you when you go to a show?: Female, News-Junkie, Activist, Theatre Artist, Virginian

Who is your favorite theatre artist and why?: What a painfully difficult question to answer. Right now, I can’t stop thinking about Alice Birch. Reading an Alice Birch script, or watching one on stage, or working with a production, you can feel the playwright figuring something out for herself. Along the way, you find questions and answers that you hadn’t considered before but for some reason have always been in the back of your mind. Alice Birch does something that I love to see… plays with familiar narrative.

What is your horoscope and how does it manifest in your writing?: As a Taurus, I have an admiration for the ambitious and sensual. Eye-catching and inventive use of space stays with me after I leave and undoubtedly what I will write about. That being said, as a grounded sign, I desire writing that is rooted in strong narrative and compelling characters.

How Netflix Killed a President

One year ago, the #MeToo movement gave voice to multiple allegations against Kevin Spacey of sexual harassment. Netflix took swift action and fired the actor and thus removed Frank Underwood, the central character who led the show’s narrative with Shakespeare-like soliloquies. So… how does a Netflix series kill a President? This was the question that House of Cards was tasked with answering in the first episode of the sixth and final season. The answer? Robin Wright. It’s her turn.

The first image of this new season is that of a blonde child in a white dress holding a cigarette. Cut to President Claire Underwood sitting behind the desk at the Oval Office. She is being briefed on the most recent string of threats from the internet, blazingly public and riddled with sexist tones. These threats are revealed to be roughly four-times the standard amount for a sitting President. This is the first step that the show takes toward removing Frank Underwood, by instilling a new figure into power. In the first few minutes of the show, we understand what it means to have a female President.

Claire is quickly confronted with a new challenger that she must battle throughout the season, Bill and Lynette Shepherd (Greg Kinnear and Diane Lane). The powerful sibling duo, representative of the real-life Koch brothers, were always going to be a part of the sixth season. Now with the absence of Frank Underwood, the struggle for power falls against two symbols of public and privatized influence, rather than pitting husband and wife against each other. Doug Stamper (Michael Kelly) asks his psychiatrist “who do you work for.” When the psychiatrist responds that he doesn’t work for anyone, Stamper states, “everybody works for somebody.” Does Claire work for the Shepherds, or do the Shepherds work for Claire? This is one of the questions that the new season is setting up from the beginning.

Frank Underwood is dead, but he is not gone. His absence haunts the world that he had such a large role is creating. There is a sound filling the White House that seems to be coming from the bedroom of the former, now deceased President Underwood. Two knocks. A heartbeat? A ring against the table? Claire finds the source of the knocking and carefully punctures the wall to find a bird, which she releases then says to us, “There. No more pain.” The same phrase that Frank Underwood said in episode one of the first season after breaking an injured dog’s neck. Frank’s ring appears multiple times, both physically and in reference, throughout the episode. Doug Stamper imitates the action of banging a ring twice against a hard surface, a sign of victory for Frank Underwood. With this action, Doug Stamper becomes a stand-in for Frank. Stamper is now Claire Underwood’s counter.

Netflix asks the audience a question in this first episode, through Claire Underwood. Claire turns to the audience and asks, “Are you still there? Do you miss Francis?” Translation: Are we still watching? Do we miss Kevin Spacey? For me, the answers are “yes” and “no” respectively. In this first episode, the show creators have done a fantastic job dealing with the death of their primary character and dealing with the impact of an actor’s actions. The powerful white man no longer gets to tell the story, but it isn’t as simple as that. Claire Underwood makes this all clear in the final moments of the episode. After discovering Frank’s ring, she tells us, “A man like Frank doesn’t just die. That would be… what’s the word… convenient.” The purposeful reorientation of this final season is anything but convenient. It’s conscious and calculated and captivating.