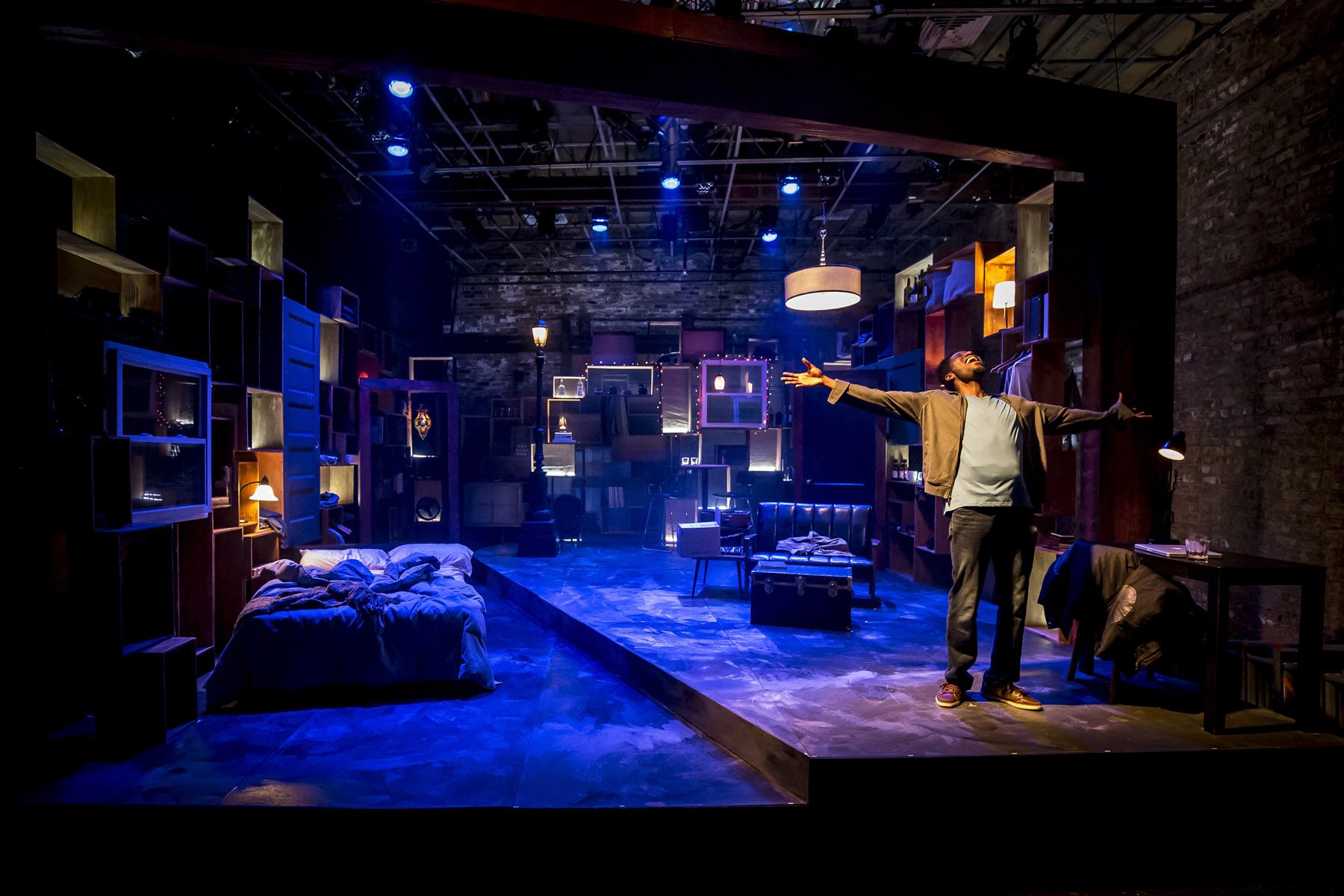 This Bitter Earth by Harrison David Rivers and directed by Mikael Burke is currently running at About Face Theatre. This two person show follows an interracial gay couple through the most agonizing police violence events of our time. It is a treat to witness the gifted Sheldon Brown return to the stage again after an impressive turn in the Shipment. Especially in a role that is all about taking risks and attempting to live life to the fullest.

Burke is an interesting new voice in Chicago theatre, and the highlight of this production for me was seeing how he chose to handle the passage of time and transitions. Time was effortlessly transcended through physical movement and costume changes that were stitched into the fabric of the show. Simple costume pieces (Bob Kuhn) that could be layered on and off gave us different looks and certain garments anchored us to specific moments in time.

The set design by Joe Schermoly, while well utilized by the cast, did not serve the life of the production. It didn’t tell me any information about the couple themselves. Different sized shelving units occupied the borders of the asymmetrical space, but were filled with random stuff: blank books, assorted lamps, even lava lamps. The only set dressing that looked like it belonged to the characters were the wardrobe elements such as shoes and hanging clothes. It is saved by the a collaboration with the lighting design (John Kelly), and use of specific practical lighting such as a street lamp, that indicates time and place very clearly.

Neil (Daniel Desmarais), a white trust fund kid who is an activist for Black Lives Matter, is dating Jesse, a shy Black playwright. Jesse feels it is enough to simply exist, yet Neil is constantly provoking him, asking him why he doesn’t care more about a cause that affects him directly. As a Black person who is frequently in conversations with while allies that mirror this one, frankly I found this dynamic enraging. Who is any white person to say a Black person isn’t doing enough to ensure their own survival, beyond simply surviving?

In this circuitous drama we witness the events that tear them apart, but when Jesse hears of another act of police violence, he realizes how much he needs Neil. This communicates that without the white savior, the Black man does not know how to function within his own reality. It was particularly difficult to sit in a primarily white audience that nodded along with Neil as he berated his partner and then was his sole comfort.

Harrison David Rivers is giving us one viewpoint into Blackness, of a person who has felt left out of their own community, and what they feel they need. Jesse believes he is left out because he is soft, and Black men don’t do that. I fundamentally disagree with this assessment of Blackness, particularly Black queerness. But this is part of the growing pains of allowing a wider variety of stories and pain to be seen. Until we fully widen the scope of Black and queer experiences onstage beyond a few plays a year, each one will be met with a criticism of this sort. It is alarming to feel like this play could be a defining experience for people outside of the community.  This is a direct correlation to how few stories like this get produced. Since it is already unique to present a gay interracial relationship onstage, it is going to be perceived by some as universal.  Rivers should be able to present this specific view on being Black and queer in relationship to the Black community unfettered. Universality is far too big a burden, and arguably a dangerous one, to reasonably ask any playwright to live up to. Specificity is a privilege most often awarded to white playwrights.

That said, this show is beautifully acted, and beautifully directed. It may not represent my viewpoint, but I can see it is deftly written and some of the lines will stay with you as you leave the theatre. Sheldon Brown and Daniel Desmarais give inspiring and charismatic performances that keep the engine of this play going under the direction of Mikael Burke. I am interested and encouraged by About Face’s to program more work by queer artists of color. It is hopefully the start of breaking apart the monolith of Black experience onstage, and dismissing the unrealistic expectation that a Black body onstage speaks for us all.

This Bitter Earth plays at About Face Theatre through December 8th, 2018.

One Reply to “The Scope of Blackness in ‘This Bitter Earth’”