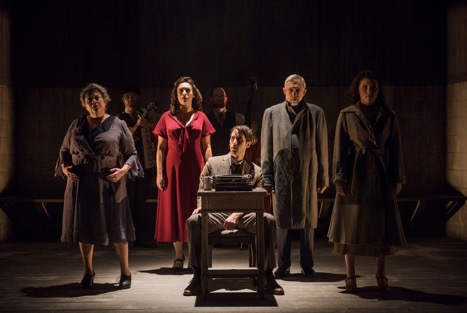 Paula Vogel’s Indecent now playing at Victory Gardens begins with the cast of performers sitting upstage, almost blending into the set that transports you to an old Broadway style house, outlined with bright lights similar to a marquee. Upon first glance, the set appears to be a deep mahogany. But once the house lights go down, and the stage lights come up, the set is a cool cinder block grey. When the cast rises, ashes gush from the insides of their coats, hauntingly reflecting and foreshadowing the persecution Jews have faced. This opening image is so beautiful, it’s almost dream-like and sets the tone for the rest that will follow.

Indecent contains a play within a play, and recounts the story of Yiddish playwright, Sholem Asch’s God of Vengeance.

We first meet 21-year-old Sholem Asch in the early 1900’s, sharing his very first play with his wife. God of Vengeance follows a Jewish brothel owner who tries to become a decent man by purchasing a Torah scroll and trying to marry his daughter off to a respectable Jewish man. As a young playwright, Sholem seeks feedback from more seasoned and established Yiddish writers. But these men feel that what he has written is an absolute disgrace not just to Yiddish theatre, but of Jewish faith and culture.  God of Vengeance is a play set in a brothel that includes Jewish prostitutes, the catapulting of the Torah across the stage, and a prohibited lesbian romance that appalled and fascinated audiences during its 1923 Broadway debut. The men refuse to read Sholem’s manuscript any further once they reach the infamous love scene between two young women. But Sholem stands his ground and keeps his script as he wrote it. He believes in his work.

As time progresses, God of Vengeance is a huge hit across Europe. The troupe performs Asch’s play in Warsaw, Moscow, and Berlin- just to name a few. After the play’s success in Greenwich Village in 1922, the show’s producer had concerns about the play’s content for Broadway audiences. In a swift moment, the play was translated from Yiddish into English and the poetic love scene between the women was cut, stripping Sholem’s original story and narrative.

After a six-week run at the Apollo Theater on 42nd Street, God of Vengeance was seen as an obscenity. The police stormed in and arrested the entire company.

The stellar cast features: David Darlow, Matt Deitchman, Elleon Dobias, Cindy Gold, Noah LaPook, Catherine LeFrere, Benjamin Magnuson, Kiah Stern, and Andrew White. The entire ensemble truly are chameleons; they play multiple characters spanning decades across time, cultures, and languages. Yet it is one character who tethers the audience and acts as a North Star through time and space, Lemml (portrayed sweetly by Benjamin Magnuson) is not only God of Vengeance’s stage manager, he is Sholem’s right hand man through thick and thin.

The set designed by Jeffrey D. Kmiec is simple, like a blank canvas. This is refined setting is  necessary in order to house the various locations, languages, and Keith Parham’s exceptional and exquisite lighting design. In the same vein, Stephen Mazurek’s projection design perfectly complements and puts the finishing touches on Kmiec and Parham’s designs.

Overall, direction under Gary Griffin is breathtakingly beautiful, particularly in the moments of the show where performance and spectacle unite, to give the audience perfectly timed and visually stunning stage pictures. The playing space was utilized effectively throughout the play. The transitions from scene to scene were seamless and hit just the right notes with the musical accompaniment by Elleon Dobias and Matt Deitchman.

Indecent reminds us that we need to stand up and fight for what we believe in. No matter what the consequences are. This is especially poignant in the midst of the Dr. Christine Blasey Ford’s testimony. Shalom’s journey encourages us to stand up for the truth, to believe in the truth for ourselves and others. We can’t continue to be silent. Silence is stagnance. And stagnance isn’t progress. The only way things will change is if we use our voices and not ask, but demand for what is right. One of Catherine LeFrere’s characters says it best, “I would not be ashamed to be arrested for acting in the play I believe in. I am ashamed I acted in this sham I don’t believe in.”