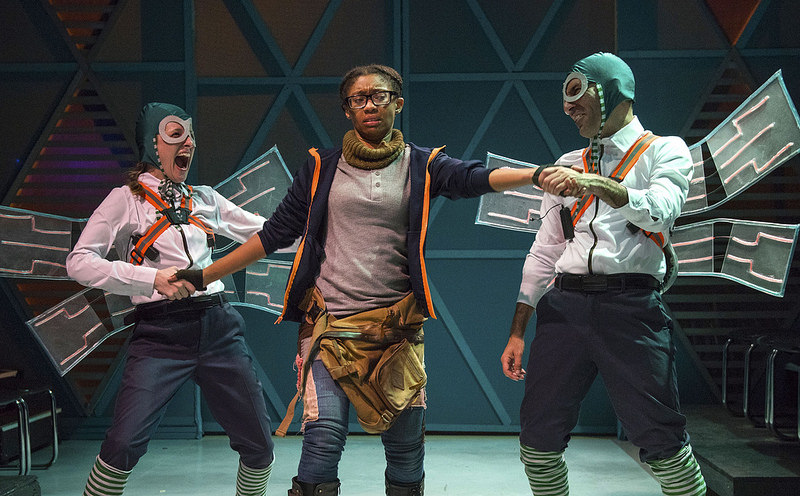 We live in a world that makes us love what we should fear and fear what we should love. Thank the galaxy for plays like Borealis that take risks to help us remember that we are our own bounty. We are exactly what we need.

Borealis is the story of two siblings, Cozbi and Absalom, a brother and sister duo who react to the world in opposing ways, like two charged particles shining brightly in the aurora borealis. Cozbi (played by Tia Pinson) is the brave younger sister of Absalom (played by Desmond Gray), a disgruntled and exhausted employee of an oil company. At the beginning of the play, dreaming of fresh peaches, warm climates, redwoods and red rocks, Absalom leaves for work in -40-degree weather and is “lethal serious” about turning in his resignation that very day. Unfortunately he does not come home.

After months pass, Cozbi receives a choppy video message from her brother and a lot of it is redacted or cut off. Based on what she is able to gather from the letter, Cozbi concludes that her brother is currently captive at work and needs her help to get free. Armed with an axe, Cozbi leaves home and heads to the residence of Titus, a former employee of the oil rig. Titus is literally scarred by his work on the oil rig and he warns Cozbi about the oil rig asshats who speak their own language. Titus gifts Cozbi her second weapon, a guide to all asshat knowhow and a basic leadership seminar that would make Steven Covey drool. Ready to code switch and chop S#!& up, Cozbi embarks on her long journey to the oil rig.

At the oil rig, Cozbi is plunged into an absurd and self-important office culture. Ellie Terrell, Props Designer, and Izumi Inaba, Costumes Designer, deftly simulate a cringe-worthy office environment through the use of hilarious and beautifully-curated costumes and props.

Cozbi successfully navigates employee in-fighting, literal grasping for crumbs, coffee addiction, self-absorption, and a 6-armed human resources representative. She finds an ally in Abbot (played by Karissa Murrell Myers) and eventually makes it to the office of Burke, the company supervisor, played by a deceptive and warm McKenzie Chinn. Chinn is sleek and serpentine; angular and yet comfortable in a brilliant, snake-skinned costume by Inaba.

One of my favorite moments of the entire play was watching scrappy, inexperienced Cozbi face off with Burke, a savvy corporate veteran who seduces her employees with superficial comforts to keep them satisfied and loyal. In a fight scene choreographed by the brilliant Fight Director, Gaby Labotka, Cozbi uses her axe to chop off the terrifying, very long, and suffocating serpent tail of Burke built by the visionary Inaba. The fight takes place on a formidable under-lit set piece that hangs close to the ceiling for most of the play.

It lowers to become a board room table and eventually the oil rig itself built by the company. I admired the way in which the movement of the play never stopped as a relatively small playing space was formed and transformed with the use of simple, modular set pieces by Scenic Designer, Eleanor Kahn.

Once free from Burke, Cozbi finally makes it to her brother who is now a Chief on the oil rig. One of the most vulnerable and beautiful moments of play follows. Absalom, freed from the grips of corporate culture, kneels on the ground. Cozbi offers to help him up and out of there, but he does not move. Cozbi does not beg or scream or cry. She does not fight him at all. Instead, she leaves him. This was another heartbreaking moment of the play and one of the most loving things I have seen on stage all year. Sometimes the most compassionate thing we can do for someone we love is leave them behind if they are ready for you and keep. It. Moving.

The final image of the play is Cozbi on video, projected loud and clear (shout out to Projection Designer, Joseph Burke!), letting her brother know that she has decided to journey north without him in search of a different world. As she says, “I am not trying to change the world. I am looking for another one.” With love she leaves the door open for and the onus on him. She tells him, “I hope you’ll come for me. I’ll be out here.” We don’t know if Cozbi finds what she is searching for, but by the end of the play I am 100% confident that she has the capacity to face whatever comes her way with courage, respect, smarts, and that axe.

For us, this play, especially the second half, is a balm and a beautiful reminder that the sacrifices we make for our search are worth it.

+Company Member of The House Theatre of Chicago