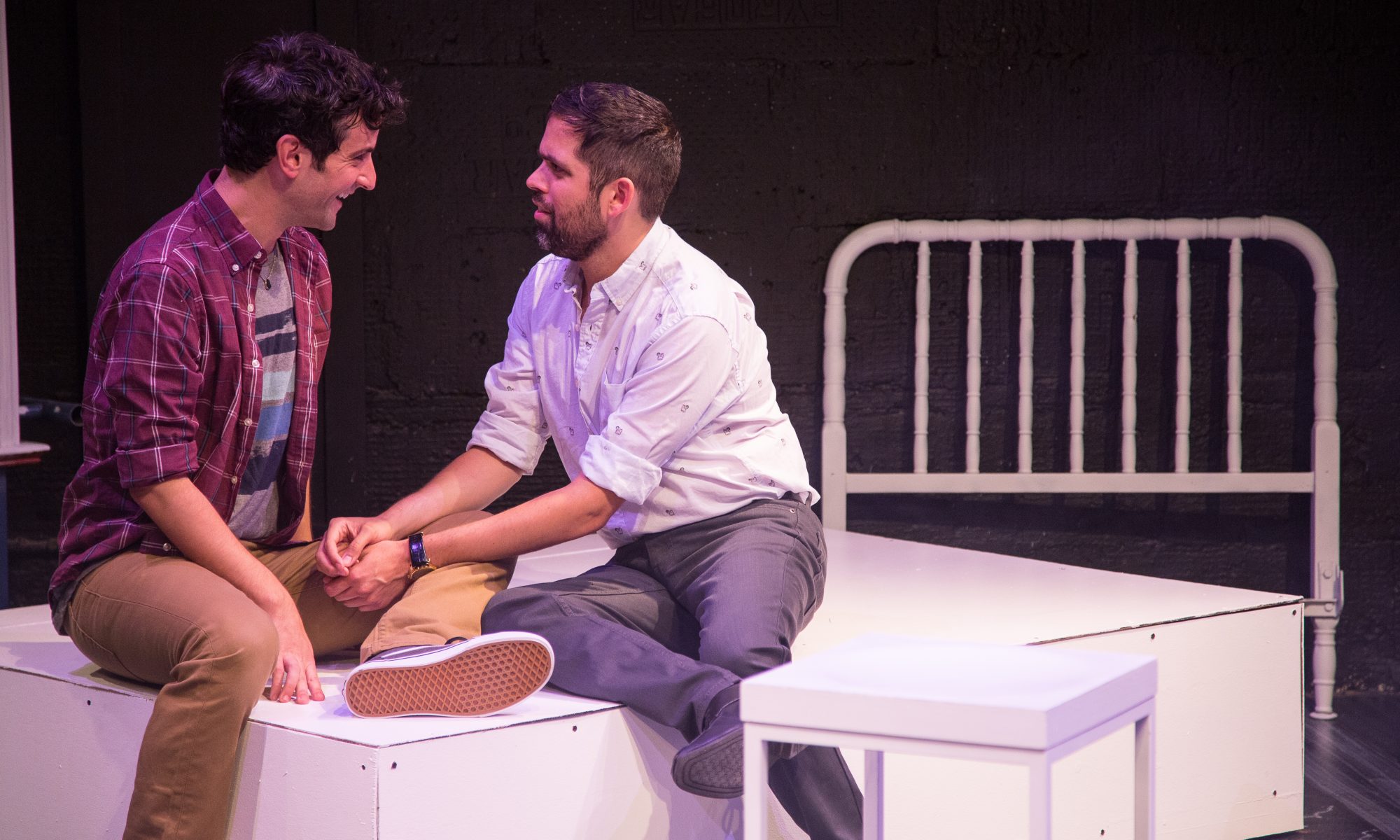 Set in New York City and spanning 2006-2011, HOMOS, or Everyone in America by Jordan Seavey, now playing at Pride Films and Plays, is a fast paced and up-close and personal examination of the lives of two gay men in love.

Throughout the play’s non-linear structure, The Academic, played lovingly by Nelson Rodriguez, and The Writer, sharply portrayed by Niko Kourtis, meet, fall in love, fight, kiss, break-up, get back together and on and on. The play makes circles, both tight and wide as it travels back and forth through five years; lines reappear, situations and images repeat, and time makes loops that blur the line between memory and prophecy. Together these men weather the ups and downs of relationships, including differing opinions, emotional expectations and physical needs until it stops working. They split, date other people, and just when it seems they might finally become friends, terrible violence strikes. The Academic is brutally beaten while walking home, after being asked the question: are you a boy or a girl? At play’s end there is hope for a renewed relationship, and love blooms again from the ashes of the attack.

The conversations these men have are marked by highly specific events: the attacks on 9/11/01, a continued military presence in the Middle East, the end of the Bush era and the election of former President Obama, and perhaps most importantly, President Obama’s declaration that Section 3 of the Defense of Marriage Act was unconstitutional, and his subsequent direction to the Justice Department to cease defending the law against challenge. The surge in the fight for marriage equality, and for acceptance of gay life and love during this time period forms the background for how these characters navigate their relationship, and in essence, the play itself.

Seavey is true to the play’s title: from start to finish the play and its characters are 100%, without a doubt, gay gay gay. HOMOS is a study in specificity, and the play is insulated by these specifics: young, gay, university educated New Yorkers between 2006 and 2011. From politics to sex to literature, these characters are unapologetically specific. This begs the question, what about everyone else? Where does Everyone In America come in? Seavey’s laser focus on this gay relationship invites the audience to grapple with this question, and the seeming contradiction of the title, and to find the universal in the specific. HOMOS is a deep dive into some of the things that make up being humans in love in the twenty-first century, viewed through the lens of a terrible trauma. This couple’s hopes, fears, dreams and anxieties are filtered through their context and this play is as much about a specific period of time as it is a specific pair of people.

Throughout Seavey’s script, there is a seeking that is felt. The Writer tries to find a way through the violence, through the fear and insecurity and real and present danger that faces LGBTQIA+ folks in the U.S. The couple must navigate the tension created by an apparent increase in legal acceptance, with a continued legacy of homophobic violence. The answer, at the end, seems to be that love will persevere, that love will be what is left when everything else is stripped away. Far be it from anyone to insist that every piece of art must address every injustice, however, the impact of any choice of programming will be felt regardless of intention. This play portrays and centers a very specific subset of people, and in a time when many people in the LGBTQAI+ community, but especially Black trans women, are facing violent increases in pressure from the U.S. government as well as society at large, its specificity feels like erasure. Three of the four characters in this play are cisgender gay men, all of whom have university degrees (and in the case of the Academic, pursuing further education) and all of whom live in fashionable (read: gentrifying) New York neighborhoods. The one Black character in the play is a bath and body shop employee whose only purpose in the narrative is to heal one of the white men’s emotional pain.

Kudos are much deserved by Rodriguez and Kourtis for excellent performances, and the designs by G. Max Maxin IV, Uriel Gomez and Sasha Smith were smart and sensitive. G Max Maxin’s multidisciplinary talent created a clever set design that gave the impression of being in the very middle of all of the swirling emotions of the play, balanced with a bold lighting design that aided the audience as they moved at a breakneck pace through time. Sasha Smith’s intimacy design was wonderfully tender and captured both the ease and excitement of new relationships. Notwithstanding all of this talent, this production remains confusing. Certainly, HOMOS is a terrific and satisfying exploration of a very specific subset of gay men in the United States during a time of tumultuous and exciting change. However, the case that the play creates universality through specificity, though tempting, ultimately falls short; the humanity of these men may be universal, but their experiences are not. Privilege and power, both structural and cultural, are still very much at work in the play and outside of it. In an America where there is persistent and massive injustice, what does “everyone” even mean?

As hopeful as it is, the play’s ending feels especially bewildering given the current assailed state of LGBTQAI+ rights, and the continued specific violence faced by Black trans women in the United States, the most recent incident of which happened right here in Chicago (though far from Pride Arts Center). In the two years since HOMOS premiered Off-Broadway in 2016, and the seven years since the play’s story ends, much has changed and frankly the sentiment that love is love is love is not enough.