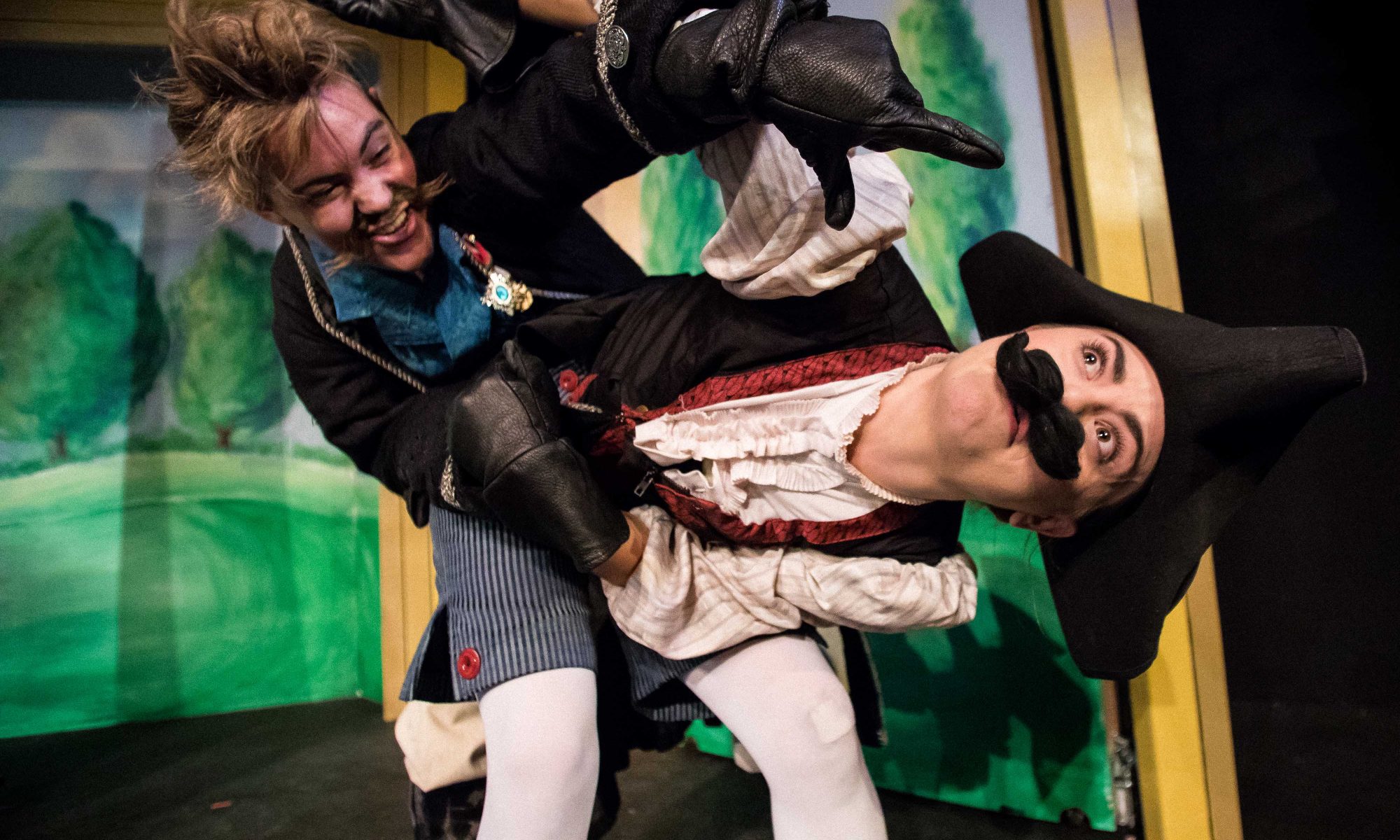 If you are looking for a hilarious and exciting new work that is feminist and delightfully queer, look no further than The Lady Demands Satisfaction a farce written by Arthur Jolly and directed by Morgan Manasa.  This play deservedly won the Bi-Annual Joining Sword and Pen playwriting competition Babes with Blades holds to encourage the writing and development of plays that feature women’s stories center stage. This one hits that mark loud and proud.

The plot centers around Trothe (Deanalís Resto) whose fate is now uncertain: her father, the greatest swordsman around, was stabbed in the back by a witness to the duel that he was engaged in.  Not having descended from royalty or high class, his estates were bequeathed to him under the condition that he maintain his status as the greatest swordsman. Upon his death his friend Lord Abernathy (Linsay Falls) delivers to Trothe the news that her inheritance will be forfeit to anyone who bests her in a duel.  So either she must marry the current best swordsman, lose everything, or fight in order to keep all that she has in the world. The trouble is, she has never learned how to swordfight.

Samantha Kaufman’s fight choreography is an eclectic collection of 10 fights and some skirmishes featuring classic small/singlesword swashbuckling and exciting found object work.  With the exception of a stiff and too-quiet first fight wherein Theo fights some random masked men, the rest of the fights were delightful and artful.

There is a spectacular fight in the dark between Tilly (Ari Kraiman) and Aunt Theo (Megan Schemmel).  During the fight in the dark, Penny (Kate Booth), one of Trothe’s other servants, hops in to help defend her scared friend with an extra sword. The blind swings and use of sound raised the stakes and made the audience lean in.  My only complaint is that at one point a blade crosses at the eye-level of another actor: they were at a safe distance, and it may have been a mistake by an actor, but still! It took me out of the story as a fight choreographer since it’s a point of safety.  That was between moments of swordplay, which again had a beautiful score of blade work and a sweeping, comic shape.

Kaufman’s creativity really shines through her found object work especially in a fight between the the real Luitger (Amanda Forman) and Theo (Megan Schemmel) which used the table, a soup pot lid, a cane, and extremely well done non-contact slaps with knaps that could have been clearly visible, but instead were cleverly masked with farcical spin reactions.  An excellent example that no matter what space you’re in, a contact slap is not necessary and there are always creative ways to sell the theatrical to appear “real.” This fight evolves into a fight with blades between the two, featuring beautiful blade work and a suave disarm resulting in Theo’s victory. “A master is only as good as his servant” she declares, having found Luitger (thinking him a servant) a good match in the fight.

Kaufman knows how to make damn good fights and feature the comedy in them. I mean, she even threw in a cross-over of swatting flies!  “Swatting flies” is when you meet blades mid-air in a high and low pattern without actually performing an attack on the opponent’s body. It looks flashy, but actually accomplishes nothing, so it’s an inside joke for those who know swordplay.  A fighting farce in a farce? Perfect!

Every element of this production was delightfully right, fitting into the tradition of farce. The set designed by Chas Mathieu featured delightfully 2-Dimensional paintings of landscape and plain interiors on convertible theatre flats, which allow the audience to focus on the bright, vibrant characters and raucous action. Each locational transition flowed with ease, enabling a peppering of physical comedy throughout.

The sound design by Becca Venable was a light and humorous juxtaposition featuring proper, poised, classic music with the ungenteel absurdity onstage. A favorite moment of the lighting design by Becs Bartle, Penny snuffs out the candles for a duel in the dark, and when she does so, the room actually becomes much brighter and the actors play the darkness: an effective and funny choice. Carlie Casas’s period costumes did an excellent job of communicating class and character with stiff stays, indicative color palettes, and comedically appropriate-sized mustaches. Everything disguising an individual, whether it be a powdered wig signifying power on a powerless man, a false mustache on a true servant and friend, and a false mustache on a true love did well to exemplify the scale of skill and desire.

The direction and performances in this production were especially astounding.  It is evident that Morgan Manasa created a room in which her ensemble could play hard and make bold, new choices in the world of farce.  The audience, especially myself, was rolling with laughter and falling in love all throughout the play.

In the end all of the womxn had learned how to fight just like their brothers or patriarchs, but exceeded their ability.  Their skills allow each to determine and fight for their own fate, and Kaufman’s choreography highlights this self-determination with creativity and a perfect balance of comedy and finesse.

I cannot rave enough about how this ensemble worked together with verve and joy and shared it with all of us in the house.  What an excellent team! And I would be remiss not to speak on the script. Arthur Jolly has written a wonderful piece of feminist theatre, a refreshing comedy that takes old circumstances and resolves everything with heart and empowering joy. This play challenges gender roles, presentation, and expectation.  Surprise! This play is queer as fuck, ya’ll!

This farce was supremely funny, feminist, and well-executed with superb choreography. I highly recommend this production. I haven’t laughed this hard in a theatre in a long time!

Bias Alert: I have worked several times with Babes with Blades as a performer, choreographer, and writer.  I know the majority of artists involved with this production.