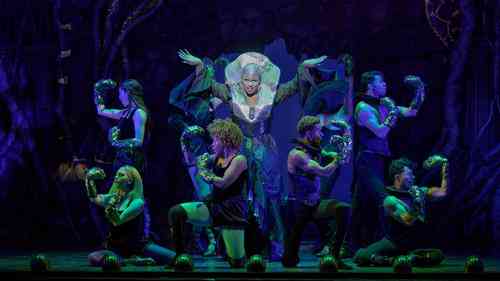 You may remember my last article in what must now become a series, Dear White Critics: Stop Using the N-Word, when Justin Hayford decided racial slurs were appropriate for a theatre column. Yesterday, Ben Brantley of the New York Times decided it was appropriate to make a joke out of the unveiling of a trans character’s pronouns in the new Broadway musical Head Over Heels’. The character? Oracle and non-binary plural narrator Pythio, portrayed by drag performer Peppermint, who is a trans woman. What’s notable is that it’s the first time a trans actor has ever created a principle role in a Broadway show, and that Pythio is one of a handful of genderqueer characters ever seen on Broadway. Therefore, as a critic, one might think Brantley would use this opportunity to celebrate that fact. Alas, instead he decided to say this:

…”its dichotomous nature matches the didactic thrust of a show that celebrates the importance of not being (and pardon me, for trotting out what’s starting to feel like the decade’s most overused word) binary… These assorted role reversals are overseen by the wise oracle Pythio (Peppermint, a contestant on ‘RuPaul’s Drag Race,’ described in the program as ‘the first transgender woman to create a principal role’ on Broadway). Pythio identifies as “nonbinary plural.” Dametas (Tom Alan Robbins), the King’s viceroy and father of Mopsa, finds himself strangely drawn to her – I mean them.”

In one fell swoop Ben Brantley decided to make a commonly used pronoun, “they,” into a joke. This seems pretty transphobic on the surface, but let’s break it down to be sure. A person who identifies as “Nonbinary plural” as both the fictional Pythio and myself do, operate with a plural pronoun. As a trans friend of mine once put it, “it speaks to the multiplicity inside of us.” I use “they/them” professionally to communicate the information that I do not fall specifically on either side of the binary.

Perhaps Mr. Brantley simply felt using singular “they” was ungrammatical and decided to poke fun at something he thought was wrong– unfortunately this assumption is incorrect. According to Merriam-Webster (https://www.merriam-webster.com/words-at-play/singular-nonbinary-they ), singular “they” has been in use since the 1300s, and as a nonbinary pronoun dating back to the 1950s.

That means the singular “they” pronoun has been in use for what is quite likely the entirety of Ben Brantley’s life, and yet it is somehow new to him. Interesting. It would be easy to defend the idea that Mr. Brantley was simply unaware, however it is his job as a writer to represent the people he is writing about fairly, be up to date on basic grammar, and to not make fun of the people or characters he is writing about. Those are bare minimums.

Furthermore, Brantley has been writing poorly about depictions of genderqueer characters for some time. One only has to look at his review of Men On Boats for evidence:

“That women — embodying 19th-century mores while speaking in a 21st-century vernacular — are portraying men here weaves this point of view into the very fabric of the performance. And I have the feeling that it may be easier for them than it would be for male actors to grasp the artificial constructs of masculinity from Powell’s time. (For the record, not all the ensemble members identity as belonging to a single gender; so excuse any hedging use of pronouns.)”

In the space of a few breaths he acknowledges not all performers identify (“identity” is likely a spelling error here) as a singular gender yet he calls the performers women. That is not even the worst part, the worst part is this was written in 2015. Ben Brantley knew non binary pronouns existed three years ago and he apparently has not taken a second to educate himself on the long history of the gender binary and folx resistance to it.

Let that sink in.

Brantley made the active choice not to give a shit about a relatively large and ever growing demographic of people he is supposed to advocate for or at the very least respect. You cannot convince me that Brantley would have made that joke if he actually had compassion and understanding for the trans community instead of our pronouns as a burden he was excited to get one over on. It’s insulting to the New York community, the national theatre community, and most importantly it limits the art.

Recently, we lived through the abuses of Hedy Weiss on the Chicago Theatre Community on its queer and black members. Weiss called  Hir “a darkly dysfunctional family for the non-binary era”.

“By the end of ‘Hir’ a line from Shakespeare’s ‘Much Ado About Nothing’ came to mind. It is spoken by a bachelor who realizes he has fallen in love and quips: ‘The world must be peopled.’ Follow Mac’s play to its logical conclusion and you might be tempted to say: Well, we now have test tubes for that.” – Hedy Weiss

As a non-binary person, I have never been tempted to say “we now have test tubes for that,” when it comes to childbirth.  I’ll be honest and say this gut punch hurt just as much as the Pass Over review. This insulting remark negates the variety of ways trans people become healthy parents, and propogates fear that trans people are somehow a threat to populating the earth – for the record, that’s clearly false.

This rhetoric creates mistrust. When Hedy was reviewing for the Sun Times (and even now as she reviews for WTTW), performers were quite literally afraid to be reviewed by her. Afraid she would comment on their body, their gender, their race, or say something violent about the community they belonged to. They did not want to perform for her. Many lost paying work because of their refusal to perform for a woman they did not trust. Brantley has now entered the same sphere: if he cannot and will not advocate for queer artists and their representation onstage, they will not feel they are welcome on the stages he is supposed to validate, and less artists will pursue roles.

Brantley has since released an apology and response, and edited the review to no longer include the text depicted above. They also have taken the opportunity to correct some grammatical errors (“your” to “you are”, that sort of thing). Which makes me wonder – how fast and loose is the editing process at the NYT that contractions are thrown to the wayside? Furthermore, Brantley claims he was trying to “reflect the light tone of the show.” Really? “and pardon me, for trotting out what’s starting to feel like the decade’s most overused word…” sounds weary and annoyed, but hardly light. Additionally, if the show spent a whole plot point telling you NOT to say something, perhaps try just not saying it.

Brantley’s apology reads: “I feel horrible about having offended transgender and nonbinary communities. I was trying to reflect the light tone of the show, as well as a plot point in which one character learns to acknowledge another not as ‘she’ but as ‘they’ — this is meant to be a reference to the character of the Oracle [Pythio], not Peppermint, the person who plays the role. This unfortunately read as more flippant than I would ever have intended especially with regard to a performance that marks a historical first. I am deeply sorry.” 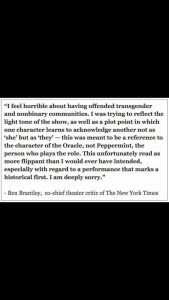 The thing is, I never thought he was referring to Peppermint because I know who she is, it’s the flippant attitude around having to acknowledge the gender binary and making fun of the idea that it’s hard to remember pronouns that bothered me. It is imperative that Mr. Brantley give a genuine apology that incorporates accountability rather than excuses. It is equally imperative that he actually educates himself on this large,  loving, and creative community of artists and people. As a mouthpiece for one of the biggest left leaning newspapers in the world, he should know better, and we should demand better.  Peppermint says, “Trans women and women, have always been directly and indirectly contributing to the art form of drag.” I take it one it one step further: trans folx have always directly and indirectly contributed to the art form of theatre, and we ought to start respecting that.

As a critic of the New York Times and therefore a leader of and role model to arts journalists across America, I expect better from Brantley. Which is why we can’t wait for Ben Brantley and Justin Hayford and Hedy Weiss’ tolerance. As a new generation of arts leaders emerges we must find ways to train and legitimize the perspectives of writers who are interested in compassion for those who are not like themselves.

Of course, sometimes we make mistakes and there are things we will not know, but critics must have a relationship with and a respect for the theatre community if their writing is to be of any value at all. Rescripted has South Asian, African-American, White, Latinx and genderqueer writers on its staff. We have trained and employed a young person who writes regularly for us through our youth critics training program The Key. That program is returning this Fall. We will not wait for tolerance, we will instead write our way into the world in which we want to live.

One Reply to “Dear White Critics: Stop Being Transphobic!”