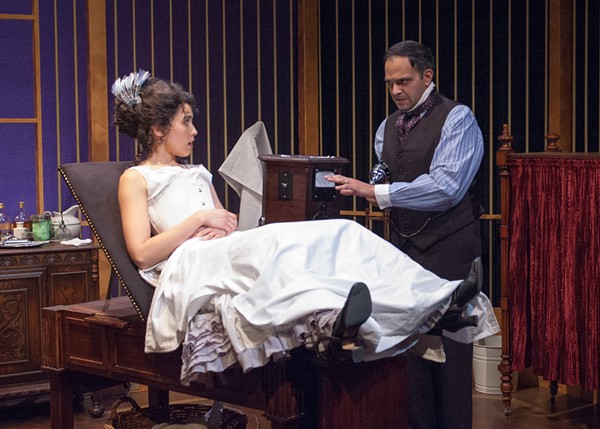 The fact that somehow the existence of female sexuality is still up for debate is almost impressive in how narrow-minded it is. Not enough has been sad about the epidemic of “hysteria” in the 1800’s. The fact that a legitimate medical diagnosis was given to women who were experiencing the wide spectrum of basic human emotion and no longer living up to men’s expectations is nearly laughable. And yet, as off the wall as it sounds, it should only come as a shock to someone who hasn’t picked up a newspaper in the past month.

The rampant sexism was more offensive because it was surrounded by a bunch of men patting themselves on the back for the huge technological advancements being made. The illusion of female autonomy and choice was being paraded, but in Sarah Ruhl’s In The Next Room or the vibrator play, we see Mrs. Catherine Givings (Rochelle Therrien) literally trapped. The set is wrapped by delicate wooden bars that cause her home to imitate the birdcages atop her piano, languishing for the human touch, similar to Mrs. Givings herself. She’s a trapped bird, flying circles around the same four walls day after day.

The subject matter of Ruhl’s play calls to mind Charlotte Perkins Gilman’s “The Yellow Wallpaper,” a connection not missed by Timeline’s production team. A number of allusions were made to the classic short story detailing the derailing sanity of a woman being treated for hysteria. Early on, a very distraught Catherine Givings  tells of her discomfort around the green curtains “filled with ghosts,” and you can find Mrs. Givings examining the yellow floral pattern on her walls whenever she finds herself a bit overwhelmed.

Sarah JHP Watkins’ set was exquisite, placing us deep within in the home of the Givings, a well to-do family in late 19th-century America. The operating theater (or The Next Room) was clearly separated, and there were often times when two scenes were happening simultaneously. This could have been a distraction, but those silent moments in the operating theater give the audience access to the information Mrs. Givings so desperately wants. What I especially loved was the romanticism of natural light, and seeing what electricity and the lightbulb symbolized as the world entered a new age of understanding. Its difficult to truly recognize what a monumental event it was when false light was introduced into our everyday lives.

In The Next Room or the vibrator play could have very easily moved into the realm of being a sex farce, something the team was aware of and did a miraculous job avoiding. A highlight of the production was Joel Ewing’s Mr. Daldry. Unaware of his blatantly piggish nature and the impoliteness of his comments, it was almost difficult to be mad at him because he was so empathetic. It would be easy to point to Mr. Daldry as the villain of the story, but Ewing didn’t allow us to do that. His delivery wasn’t poisonous or malicious, but simply dumb. In The Next Room looks at the absurdity of the time and what occurred through pure ignorance. Ewing was a perfect encapsulation of that.

I could not understand why the Dr. Givings (Anish Jethmalani) and his wife were together. They didn’t seem to work together. One was excitable and curious, the other so straightforward and severe. There was an inability on both these characters parts to recognize the blunt nature of their words. In a time when all there was were manners, saying exactly what came to your head was not the best quality to possess. But neither character speaks out of malice, they simply speak their truth. With Mrs. Givings, it is how her surrounding and the stories of the people around make her feel and what she needs. And Dr. Givings is a man of science.

At first glance, there is not a lot of connections that can be made from where we are right now and where they are. However, getting a better look, you’ll soon discover that the similarities are a bit scary in their likeness. We are living in a time when ownership of women bodies is, for some reason, a hotly debated issue. We are also existing during a time of immense technological change. In The Next Room speaks to this current moment in ways I could have never expected.

It’s not specifically historical either. There wasn’t really a Dr. Givings (Anish Jethmalani), whose obsession with his science blinds him to the fact that his new medical instrument is in fact the first electric sex toy. But that’s not really the focus of the play either. If anything, playwright Sarah Ruhl makes the doctor’s wife Catherine (Rochelle Therrien) the protagonist.

She’s quite the engaging one too. Rochelle fills Catherine with a boundless energy that fits her outlandish and often overly candid ways. It fits well with the main character’s struggle, which is the contrast of her bubbly nature and willingness to do anything next to her husband’s closed off behavior and predictable lifestyle.

In The Next Room is an apt title for a surprisingly somber piece on how both personal and societal forces keep even our closest relationships at a distance. Even the play’s set, designed by Sarah JHP Watkins, is divided in two by a door, which is enough to show us the ways in which various characters are locked off from one another, with strict golden barriers reminiscent one of a birdcage.

It’s that somber feeling that hits me the most when I’m asked what I think of this play. Mechelle Moe directs the play well. The costume work by Alison Siple is elegant and timely. Andrew Hansen’s score hits the right tone and even has some memorably melodies. All the individual elements of the play are well crafted. But it’s the feeling of distance, both of the characters and that of the audience from the stage that is truly striking.

If you do need further convincing though, look no further. From start to finish, this silly yet serious production takes you on a journey that leaves you with more laugh lines than when you first came in. Mechelle Moe’s staging gives off a very cozy, homey feel—it makes you feel like you’re at someone’s rich aunt’s house. Although the story takes place in the late 1800s, a few artistic choices make it feel modern, such as the stylish exposing light fixtures hanging above the set.

Sarah Ruhl’s play explores the lives of a women suffering from “hysteria,” erratic behavior supposedly caused by fluid building up in her womb. Dr. Givings (Anish Jethmalani) uses unconventional methods to cure his mostly female patients with an electric vibrating device, but he doesn’t see the problems with his own marriage.

Alison Siple’s costuming was superb, and I was mostly focused on the costumes of Catherine Givings (Rochelle Therrien) due to how grand they were. This is not to slight the costuming of say, Sabrina Daldry (Melissa Canciller), whose clothes get significantly more colorful as she is relieved of her ailment. I must give props to Chanciller performance; she has an inherently uncomfortable role where she has to moan pleasurably for the audience, and I think that is a very hard thing to conquer without laughing through the awkward tension. She does this quite expertly, almost as if she’s had an actual orgasm before!

It’s easy to use comedy to escape the weirdness of a script like Ruhl’s, but in a production like this, it is best to take advantage of the weird. The comedic relief is always subtle but also in every line. This is quite evident in Joel Ewing’s character, Mr. Daldry—an oblivious misogynist that would probably describe himself as honest. Every moment he is on stage he is saying something he shouldn’t, and whether or not he’s aware of the response he elicits, he continues with his hilarious yet highly offensive dialogue.

While still on the topic of confusing men, we are introduced to a man called Irving (Edgar Miguel Sanchez) in the second act. At first, his presence was a question to me, one could even call it unnecessary, but as I learned more about him I found his role to be quite important. He too was diagnosed with hysteria and was treated like the women. I found this to be effective because it showed the other side of the spectrum for men, and of course there were “homosexual undertones” given where Irving was… probed, but that was not what his character was about and I enjoyed that.

There were a lot of moments in the show when I thought things were going to go one way and instead they went an entirely different direction. This not only kept me on my toes but in a complete state of awe as I watched characters make decisions that changed everyone’s interpersonal relationships. But in the end it all works out. Or does it? Guess you’ll have to see it to find out!

The most interesting thing about this play is that it has women basically controlling the advancements of the medical field in the 19th century. The piece is empowering for women, even though it makes it appear as if they are sick so they could get the electric treatment. Another great thing to note is Sarah JHP Watkins’ set design and how it is built like a bird cage, just like Mrs. Givings (Rochelle Therrien) described while being trapped in a passionless marriage with her husband, Dr. Givings (Anish Jethmalani). My favorite part was Brandon Wardell’s lighting, which was perfect for every scene, especially the ending that shows the passion that the doctor and his wife have longed to release.