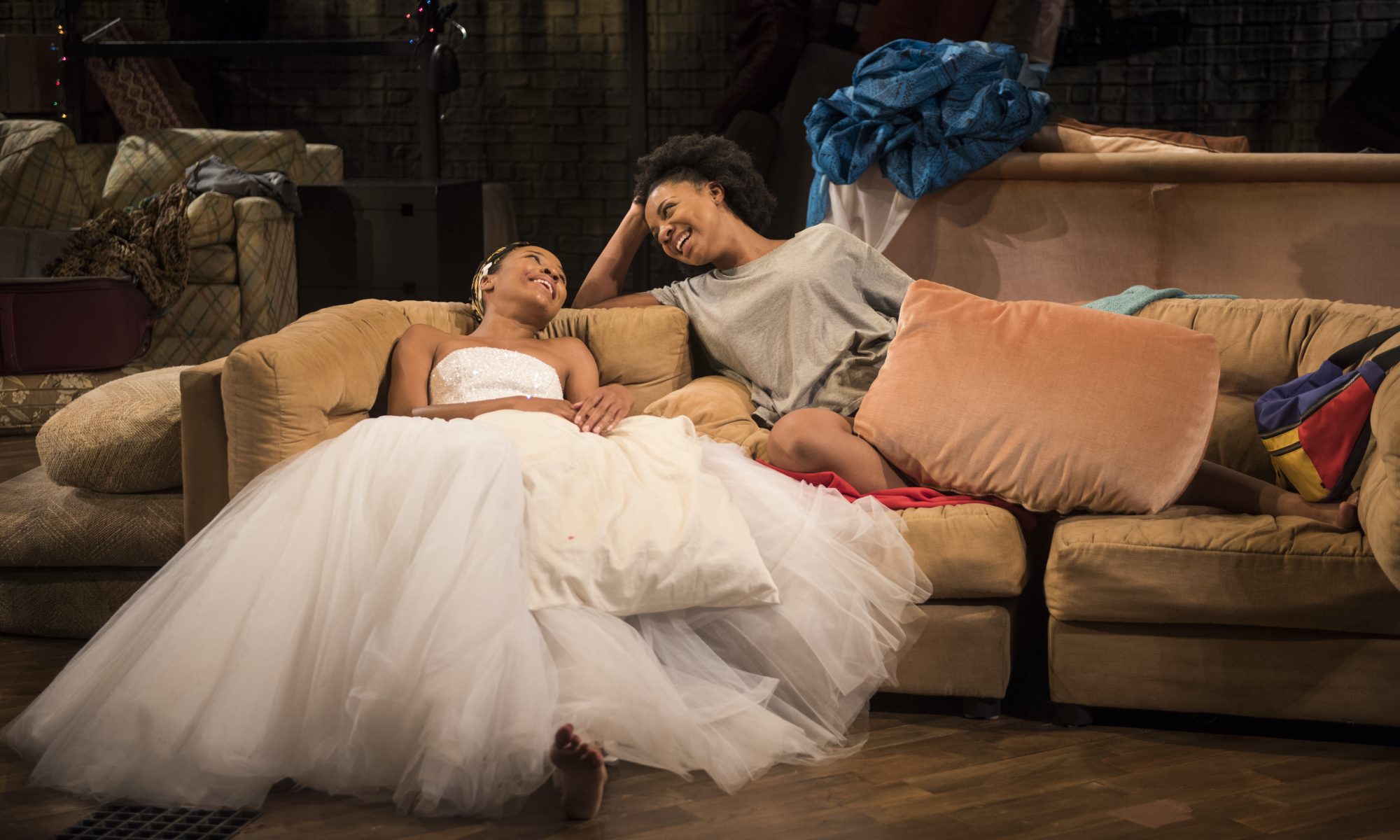 Stumbling through the seemingly unending crowds and stairs that make up Steppenwolf’s theatre, I was frazzled and bewildered by how many folks I saw waiting to be seated for the opening night of BLKS. At first glance I found the title to be easy and not very enticing at all, but it was quickly redeemed as I saw the set. Like the title would prove to be, it was comprised of… well… everything. There was no shortage of couches, there were even couches on the walls! Set designer Sibyl Wickersheimer draped long blue curtains on the stage, making distinct isolations that served as different rooms within the same stage. It was messy, chaotic, a perfect representation of life on your own, and I loved it.

Now this was the biggest stage set up I’ve seen at Steppenwolf (The Crucible’s playing area felt much smaller), and there were only about five characters. I was nervous to see how they would utilize the entire space without being drowned out by the disorderly jumble among them. I soon got my answer as each space was populated at some point, often the same points, even right in front of the stage and through the aisles! This made for a more personal connection with the cast, allowing the actors to command the sprawling set behind them.

Speaking of personal… there was a toilet on stage, and I thought oh yeah that makes sense it’s an apartment they need somewhere to poop… even though you never see anyone use the bathroom during a play. Makes you wonder. But this was new territory, the toilet was utilized not even ten minutes into the play. Yes, for peeing, or pooping or what have you but also as leverage so our main character Octavia, played by Nora Carroll, could check out the happenings of her… down there. Which is another thing! This play does not shy from the down there, it doesn’t shy away from most things, it is vulgar and explicit and aggressively unapologetic about it. Another thing worth noting is how modern this production is, it’s set in 2015 so we get a sense  of our present moment, especially through the playlist of music by sound designer T. Carlis Roberts. A lot of slang we’ve developed is put into the play, which is nice the first few times hearing “bruh” and “dude”. These phrases are a bit overused and can distract from some of the serious moments. It seemed like it was trying to relate to the audience, and rather than draw me in it pushed me away and left me examining my own choice of words like… do we really say bruh that much? But I digress.

The set is unchanging, and there are added elements needed when a scene takes place outside or at different times of day. This is achieved through the simple and subtle projections to the dark parts of the set (projections by Rasean Davonte Johnson). These were set just right, it honestly might’ve been there the whole time I didn’t even know, which would be due to how much happens on stage. There is never a dull moment. That makes for an exciting play, yes, but also an overwhelming one, so much so that some plotlines are never revisited that I wanted to explore more. I say this in regards to the white woman cast (Kelly O’Sullivan), I’m not even tryna be shady y’all she didn’t have a name I think it was That Drunk White B*tch on The Couch* or something. Nevertheless she ends up getting intimately involved with a core character, Imani — a fierce caretaker played with comedic relief by Celeste Cooper. O’Sullivan serves as this ignorant white lady trying to have a good time but her ignorance consumes her and gets in the way of connecting with Imani. Imani is a little flirty at first, but by the end of their interactions thinks she is nothing more than a privileged white woman trying to get it on with someone “exotic,” mostly due to That Drunk Couch person’s fascination with her hair. Imani seemed peeved with her presence whenever they weren’t kissing even though That Drunk White B*tch was only trying to educate herself, and while it isn’t Imani’s job to educate her, she makes her feel bad for not knowing things she didn’t know! And then she just leaves! We never hear from Drunk White again and it makes me wonder why their relationship was staged in the first place.

What really stood out was that this is a queer play, but that’s not what is advertised and I love that. After all, you don’t warn people when they’re about to witness heterosexuality! It didn’t try too hard to be something it wasn’t, either. For example, when Octavia’s pseudo-partner Ry (a filmmaker played with a direct and emotional honesty by Danielle Davis) is grossed out by Octavia’s nether-regions mole after just having had relations, Ry’s reaction is both hysterical and real. Without explicitly stating it, Carrol’s portrayal of Octavia suggested that she might be attracted to anyone that deserves her affection no matter their gender, and that was special to see.

It’s BLKS’s first production, and as I mentioned before it is attempting to take us through a lot of moments of everyday life. While some of these moments might need fleshing out, there are some spectacular performances from the whole cast, including Namir Smallwood as All The Dudes, and Leea Ayers as the smart, sassy June. There is so much that Barnes does well, and under Nataki Garrett’s direction, BLKS is larger than life. It is full of surprises, explicatives and strong women, and if you’ve got a thing for any of those things, this could be your thing!

*[Editor’s Note: Ms. O’Sullivan’s  characters are That Bitch on the Couch and Drunk White Woman respectively.]*