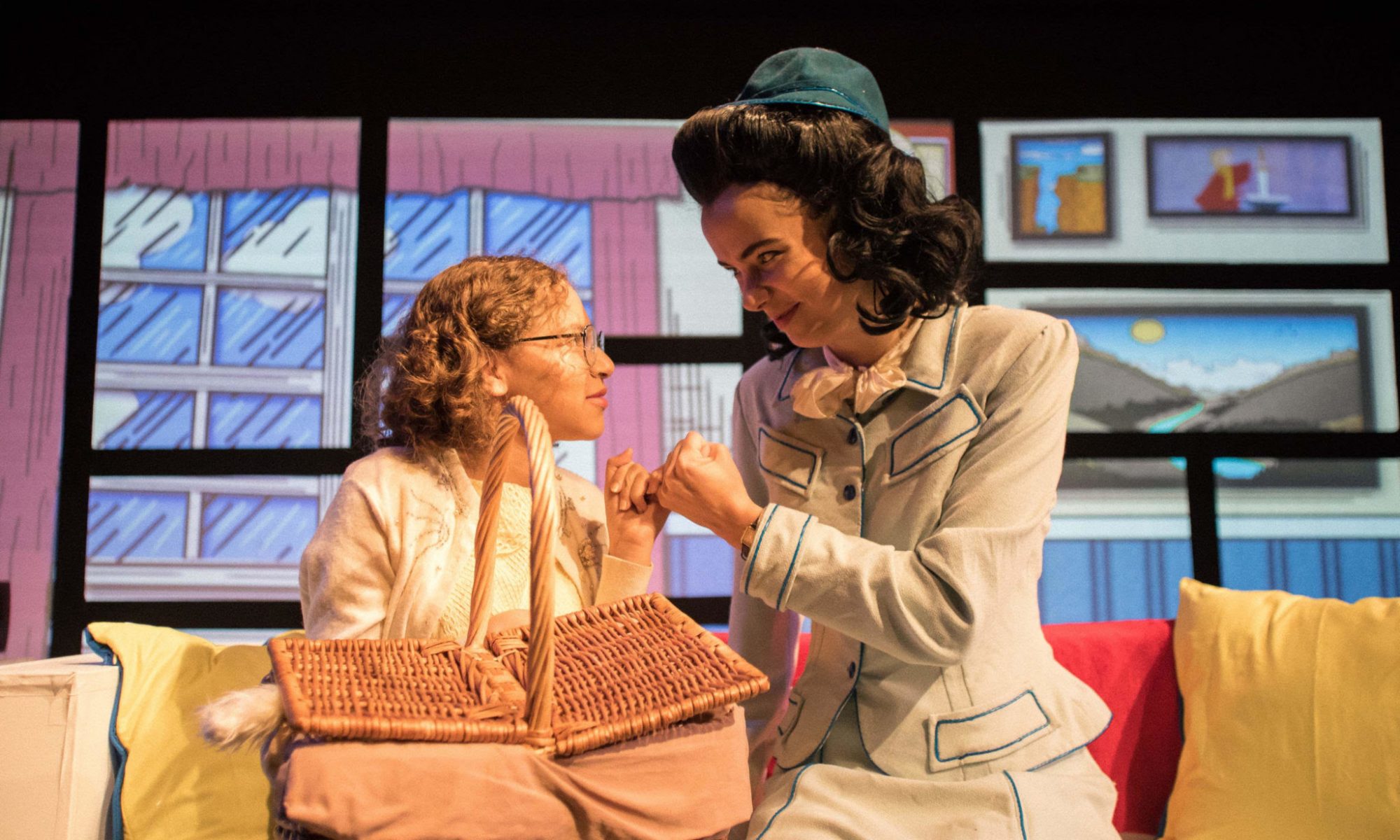 When Barbara Lhota learned of Russell Stamm’s 1940s comic strip, The Invisible Scarlet O’Neil, she felt compelled to revive the title character. The comic, which ran for sixteen years in the now defunct Chicago Times, featured one of the first female superheroes, predating Wonder Woman by a year. It struck the playwright as both appropriate and ironic that Scarlet’s superpower is invisibility. In a way familiar to many women, Scarlet leverages the advantage of being unseen. Under the cloak of her invisibility, she aids the vulnerable, while in her professional life as a reporter she fights alongside her compatriots for visibility and recognition. Lhota’s stage version is a perfect fit for Babes with Blades, a company devoted to using stage combat to tell women’s stories. The show, currently running at The Factory Theater, is fun and fresh while invoking the spirit of the period. Chloe Baldwin’s Scarlet is a different kind of superhero, clever and determined, yet at times vulnerable. She draws her strength and motivation from her compassion and connection to others.

The play, directed by Leigh Barrett is full of zany characters. And though Scarlet fights the usual mid-century bad guys, Nazis and the KGB, the play’s central premise, that Russian spies are hell bent on stealing government secrets so they can exert mind-control over the American public, is uncannily topical. The show’s many converging storylines mirror the experience of stepping into a rambling comic strip serial complete with a lab accident origin story. But at its heart, Lhota’s play is about intergenerational mentorship. The older women protect and support the younger women and everyone sticks together. Seasoned reporter Jean Sharp (Aneisa Hicks) takes Scarlet under her wing in the newsroom. In return, invisible Scarlet springs into action making a fool out of the scoundrel attempting to put his own name on Sharp’s big scoop. Soon after, when Scarlet meets an orphaned schoolgirl, Sarah Blue (Margaux Fournier) it’s her turn to play role model. The pinky promise they make to work together (pictured above) encapsulates the show’s central message that women are stronger when they join forces. Fournier, making her professional debut, plays Sarah as an introspective girl of emotional and intellectual substance. Off-stage, Fournier and her family are Lhota’s neighbors. That Lhota has written this role for her is an inspiring real-life example of how women can create opportunities for the next generation.

Lhota peppers her play with references to 1940s Chicago including scenes set at The Edgewater Beach Hotel. She has also woven in a fun bit of women’s history by including the historical figure Hedy Lamarr. The legendary movie star slash inventor is played by Lisa Herceg who lovingly channels Lamarr’s larger-than-life demeanor. Lamarr’s technological breakthroughs paved the way for the invention of Wi-Fi and Bluetooth technology. The play also weaves in some black history via the storyline of Jean Sharp. As the journalist of color in an otherwise white newsroom, Sharp fights a different kind of invisibility. Her editor privately acknowledges he knows Sharp is his best reporter, but it hasn’t prevented him from allowing a white guy, the publisher’s son, to take credit for all her work. In preparing for the role Aneisa Hicks drew inspiration from real life journalist Alice Allison Dunnigan, the first black woman to become a White House correspondent in 1948. Hicks’s performance was informed by her research into the tribulations Dunnigan and her peers faced as trailblazers in the field during an era of legally protected workplace discrimination including lower pay and restricted access to sources due to segregation. And while the play’s depictions of discrimination and harassment are indeed accurate to the period, they also serve to remind us these problems are anything but old news. Black women in the media still encounter silencing and censure (Jemele Hill at ESPN being the current example) and recent scandals at Fox reveal sexual harassment is still alive and well in many American newsrooms. In these ways the play succeeds in connecting the past with the present.

The Babes with Blades creative team does a nice job bringing the comic strip to life. The show features impeccable period costumes, designed by Kimberly G. Morris. The projections, designed by G. “Max” Maxin IV”, are in bright primary colors. Thought bubbles appear paired with voice over when Scarlet is thinking and the stylized fight scenes are punctuated with comic strip staples like “Bam!” and “Pow!” As an added bonus the characters interact with the projections in a way that figures into the plot.

The Invisible Scarlet O’Neil is an enjoyable evening of theater with a hopeful message about female camaraderie.

Bias Alert: I have a friendly relationship with Barb Lhota and Lisa Herceg who I met originally through my work for Stage Left.