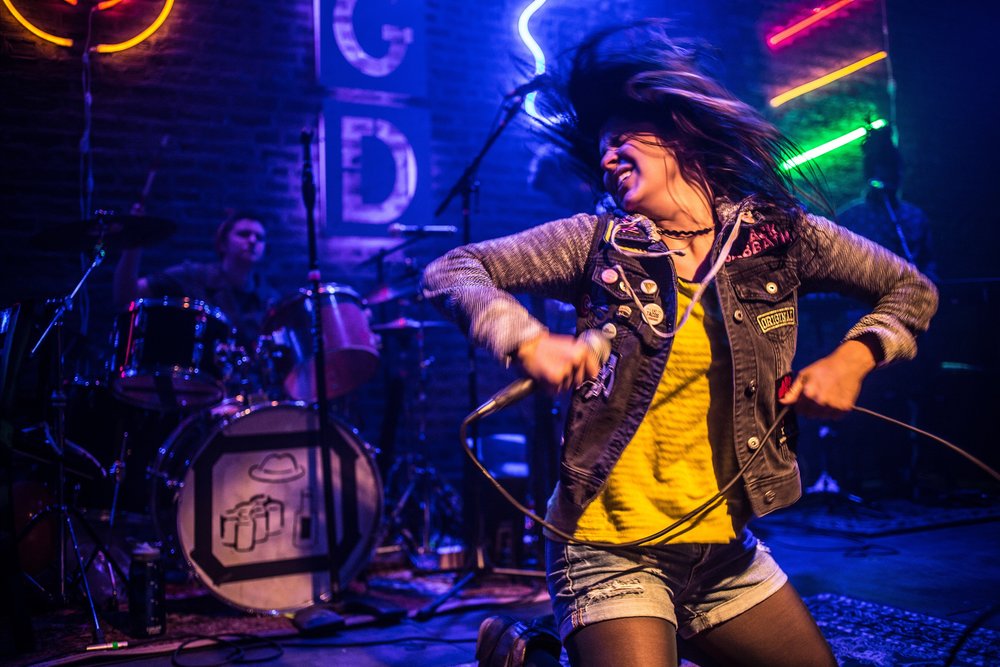 I am so glad I got there.

When you first walk into the Den and take a left into the Bookspan Theatre occupied by Haven and named after Artistic Director Josh Sobel’s aunt, Janet Bookspan, you are greeted with the sweet scent of a smoky haze machine. The entry to the space is plastered with pop and punk posters, and as I left the antique stylings of the Den lobby I felt like I’d walked into an independent rock show. The audience has the option of sitting at low, cabaret-style tables and being right up on the action (as I chose to do), or sitting in the more traditional bleacher-style seating. No matter where you sit, you can see the faces of everyone watching the show with you, which seems like an intentional effort to support the intimacy of this play.

We’re Gonna Die is an ode to living and dying, guided by the Singer, Isa Arciniegas, whose alto voice is versatile enough to go from sweet ballad to angsty rock song. Isa captured the crowd with her stamina and ability within the first ten minutes, as she effortlessly got the audience on board for the cabaret-style of the show. She never lost confidence or momentum and moved deftly through the witty and emotional text, trusting that the audience was smart enough to keep up with her. It’s a crucial first ten minutes in a compact play, running under an hour and a half with no intermission.

The design world of We’re Gonna Die fused effortlessly with the text. The simple stage (set design by Mike Mroch) ) and punky costumes (Izuma Inaba) were effective, I couldn’t help but think of Rosie The Riveter when looking at the red bandanna and brunette ponytail on “lady-drummer Sarah [Giovanetti]” as Isa affectionately called her during the opening performance. The play’s title We’re Gonna Die is cleverly turned into a band logo (WGD) that is stitched into Isa’s jacket and displayed in neon lights behind them.  But the most notable aspect of the design was the lighting crafted by Claire Chrzan, who hung a multitude of household lamps  above our heads mixed in amongst stage lights, making  the lights themselves just as intriguing to look at as the stage they were lighting. The play consists of various stories from people’s lives, and I couldn’t help wondering if these lamps had sat in their living rooms and now lived again as homage to them and part of this show. I could have spent the show watching the lamps dim in and out, but the ensemble is too ferociously entertaining to allow it.

As a performer and musician myself, I know one of the hardest things in the world is to act and be in a band at the same time. In such intimate proximity to the audience, I was probably five feet away from the nearest musician, all the band members are closely watched and can’t fudge any notes or lose their cool. I have never been so impressed. Elle Walker’s poise while playing the keys and confident tosses of her long brunette hair during an exuberant and carefree dance solo ensure she grabs the spotlight at choice moments in the show. Jordan Harris possesses a beautiful singing voice, their solo moment is only one line but I was struck by the melodic tendencies of their voice. Last but certainly not least is Spencer Meeks’ beautifully messy eyeliner, and funky scene-stealing guitar solos. On the night I saw it, they also had a standout improvised moment about how their Green Goddess veggie drink was not the best choice for hydrating during a rock concert. I can happily report that hydrated or not, Spencer’s vocal talent as they harmonized on various songs was still excellent . Every person in the ensemble not only had great stand-out moments, they were serving every second of the show!

The twists and turns of Young Jean Lee’s emotional journey are best left unsaid so that you can be as delighted and devastated by them as I was. The show is compiled of true stories collected through interviews, and through their specificity they give the audience a place in each anecdote. One sentiment that I feel was perfectly captured here was the (dare I say the word?) millennial sense of being special, and deserving of immunity from tragedy, while also being perfectly aware of one’s imminent mortality. It is a reality in this new world that each of us is more empowered than we’ve ever been and simultaneously just as helpless to our mortality as ever.

Despite this feeling of millennial immortality, as the play says if you are a person there will be a day when you die. When your time comes, that is your time. Instead of being a depressing realization I found it galvanizing. My grandfather has 12 grandchildren while being an aeroengineer as a black man in the 1950’s and 1960’s. As sure as we are of death, we can also be sure that our full lives will affect those we leave behind, and that our stories will be told. I came to this show with the rawest open heart, and I left with a sense of how important life is, and how important it is to record the history of those lives and immortalize ourselves through art.

I thoroughly enjoyed my experience at We’re Gonna Die, and would recommend it to anyone who is interested in a fun punk show about living and dying. The remarkable direction of Josh Sobel, artistic director of Haven Theatre, moves easily from deep tragedy to big joy (remember – I said dance sequence!!). Lucky for you, it’s been extended to June 10th, so be sure to get your tickets ASAP if you’re interested in this fun rock production!