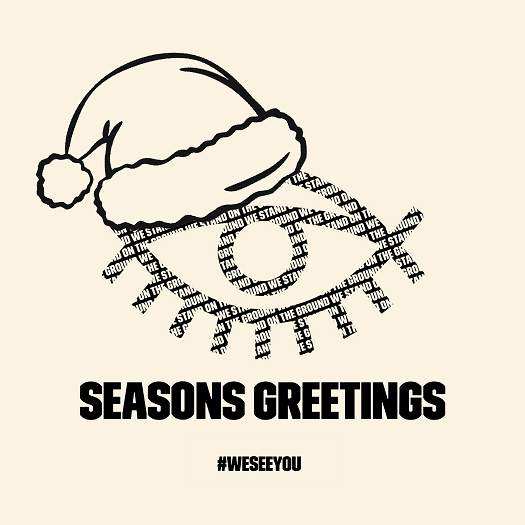 We See You White American Theater has grown exponentially since we last covered this dynamic and controversial movement in June.  Their Change.org petition has grown to over 100,000 signatures, and their Instagram has over 20,000 followers.

Who are they? Why are they anonymous?  Look no further for an answer. #WeSeeYouWat has launched a new Medium page. They are using the platform to speak directly to the Black, Indigenous, and POC community, answering the questions we’ve been asking.

In a series entitled “12 Days of Watchmas,” they seem to be revealing both the structure of the organization as well as the experiences of people that are motivating the movement. According to the first post on the  Medium page a new article will drop every day for twelve days.

“Think of it as an advent calendar for the people, written for us and by us. Published on our terms. There are MANY voices going into this effort that reflect the multidisciplinary, multigenerational movement we’ve built.” – We See You WAT.

Rescripted firmly believes in letting artists speak for themselves, and so below we have published the entirety of the first essay originally posted on Medium.  You can also follow the movement on Twitter or Instagram.

The Anatomy of Anonymity

When we met, we didn’t know why we were meeting. We were various disgruntled BIPOC theatremakers, all fired up from the unrest in the nation. We saw the testimonies of our colleagues on Facebook and Twitter and Instagram. We were boiling over with discontent and we needed release. We didn’t all know each other. We weren’t being selective. It wasn’t a hot club to be a part of. It. Was. Random. When we signed onto an anonymous zoom, we had no idea who else would be on the line. We were gathered by circumstance, and began to have church over our collective fed-upness with the field-wide fuckery. Suddenly, we felt like we HAD to do something together, and allow it to be a catalyst for future action. This was how the original Dear White American Theatre letter was born.

We then all decided to call ten friends to get them to sign the letter if they felt inspired. And ultimately, we wanted to invite our entire field into the cause by creating the change.org petition. And they did. We are the mighty 101,000 and still going.

Since then, we’ve been bombarded with the questions — Who are you? Who is behind We See You? Why are you anonymous?

Then came the accusations: We are a shadow government. We are the BIPOC illuminati. We are cowards. Elitists. Exclusionists. Simply because we refuse to quench the thirst for exposing our rotating leadership. Well let us break down why…

We study history. We have activists among us who have lived through several eras of liberation movements. We have multiple generations of culture workers in our ranks. We know what happens when leaders are identified. They are pacified and movements are destroyed. We know what happened to the Civil Rights Movement. To Chicano Movements. To Black Liberation Movements. To Workers Rights Movements. Leaders have been assassinated. Our field is no different. There are multiple ways to assassinate theatremakers: stifle their voices, exploit their talents, mute their outrage, cancel their productions, bar them from auditions and crews, blacklist them. We are not having it.

Many of us have already suffered personal attacks, been hunted and cornered by White American Theatre leaders, been targeted by the press and threatened with losing our jobs in the middle of an economically stressed season in our industry. We will not allow each other to be silenced or intimidated. We have each others’ backs, and we have the backs of our entire field of anti-racism workers and bullshit-resisters. We are working to put impact and volume behind our colleagues who have stepped out individually to share their experiences of harm.

There were initial impulses among us to step out front and be the face of the cause. But how can any one of us be the face of so many? That’s some ol’ white supremacy nonsense and we are not going to copycat. In fact, ego and glory-seeking are the antithesis of progressive movement organizing. So we theatre makers made a joint decision to resist the desires for recognition and credit that often plagues our industry-wide culture. We decided to receive NO individual credit. We chose service over shine. We chose principles over personalities. We chose to stand together. And we will not be broken.

We know we don’t speak for everybody. That would be ridiculous. And some folks are perfectly fine speaking out for their own causes. Please feel free to keep ‘doing you’.

But if you are feeling expendable and exhausted, we have your backs. If you are working in the highest positions on Broadway, or if you are working in the smallest office in the regions; If you are a student frustrated with your program and feel like you have no allies and advocates, You Do. We are not superheroes or a shadow government. We are vulnerable theatremakers who have given our blood to this field at every level. We want to see it be better and more equitable for you and for all of us. We are your accomplices. And we need you to be ours. We need your amplifying, testifying and co-signing. We need your eyes, ears, and outrage. Not to hide behind you. Not to get in front of you and block you. But to soldier alongside you, in worker solidarity.

If you want to know who we are, look around. We are all over this field. We are its backbone. And we are not playing games. We will continue to push for it to be best, because it is what we all deserve.

Yours in Love and Action, 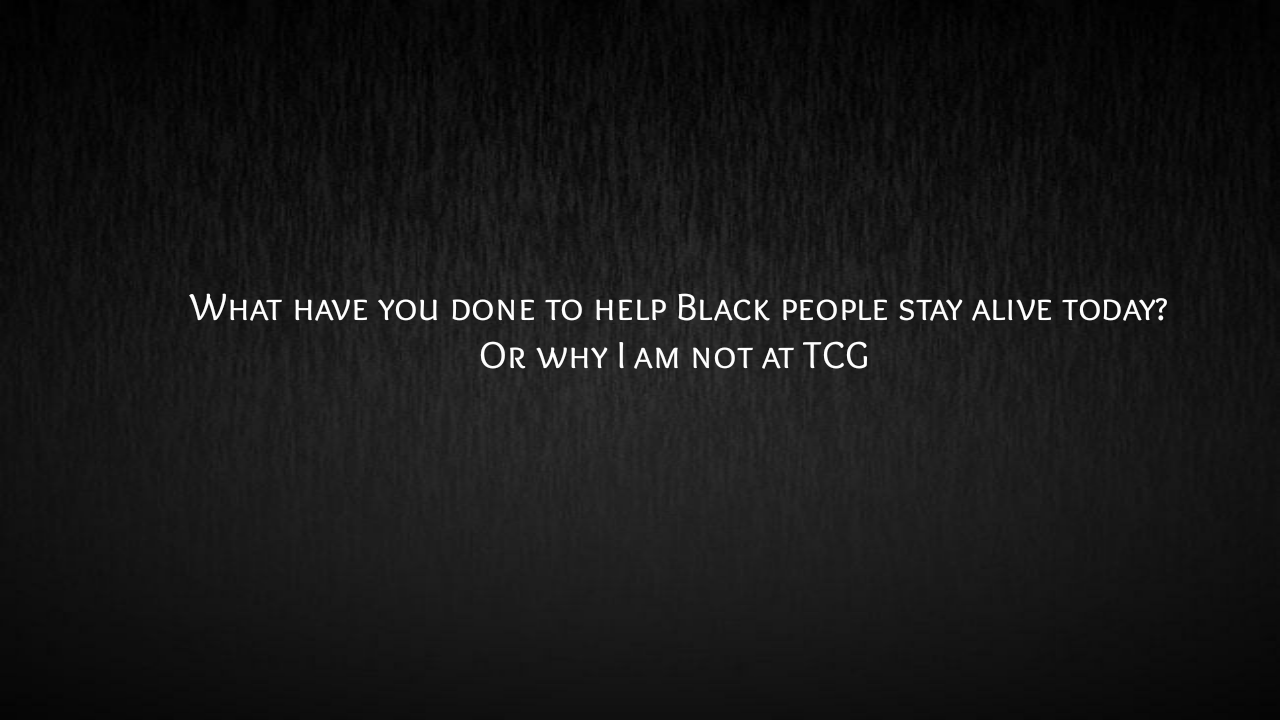 Last year I had the privilege of attending TCG and writing almost 3000 words that ruminated on the topic: What is a Theatre Review(er) Good for?

I didn’t re-read it, because I’m busy, doing whatever the fuck I can to help Black people stay alive. I’m neurotic, immuno-compromised, and generally traumatized but my Black ass is out here keeping supply lines tight and sending bodies where they need to be.  The far more urgent question I have for you today is: What have you done to help Black people stay alive today? END_OF_DOCUMENT_TOKEN_TO_BE_REPLACED 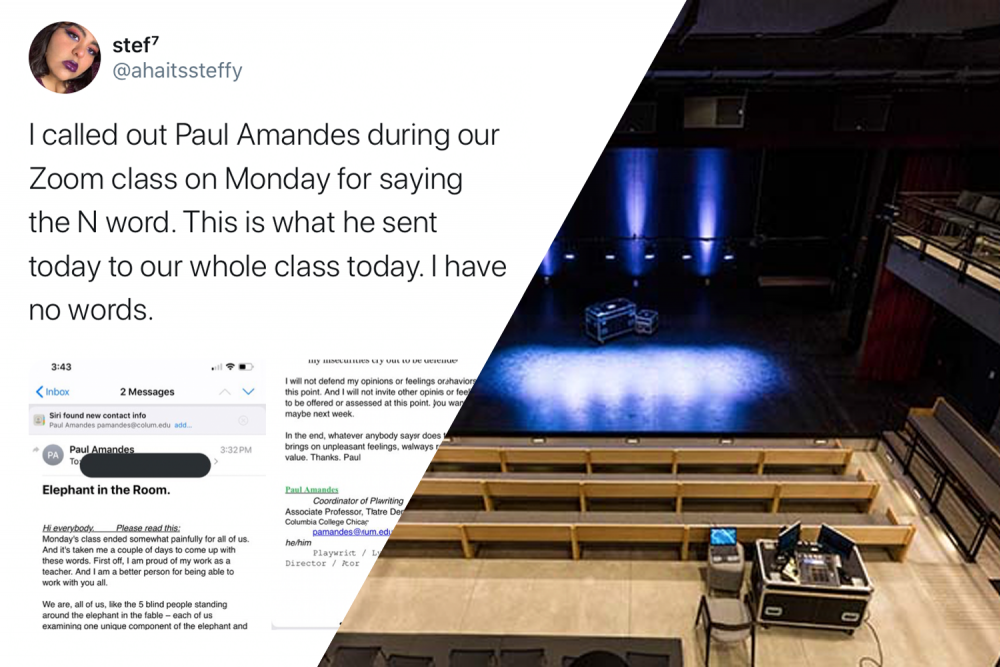 A student at Columbia College recently got a steaming portion of number two when her white professor Paul Amandes decided to use the phrase “magical negro” to explain a character death in his student’s work. Look left, look right. You guessed it, not a Black person in sight. The only person who could even challenge the professor was the student of color whose work he was also critiquing: Estefania Unzueta. When she brought up that the language was inappropriate in class on May 4th, Unzeuta describes his response:. END_OF_DOCUMENT_TOKEN_TO_BE_REPLACED 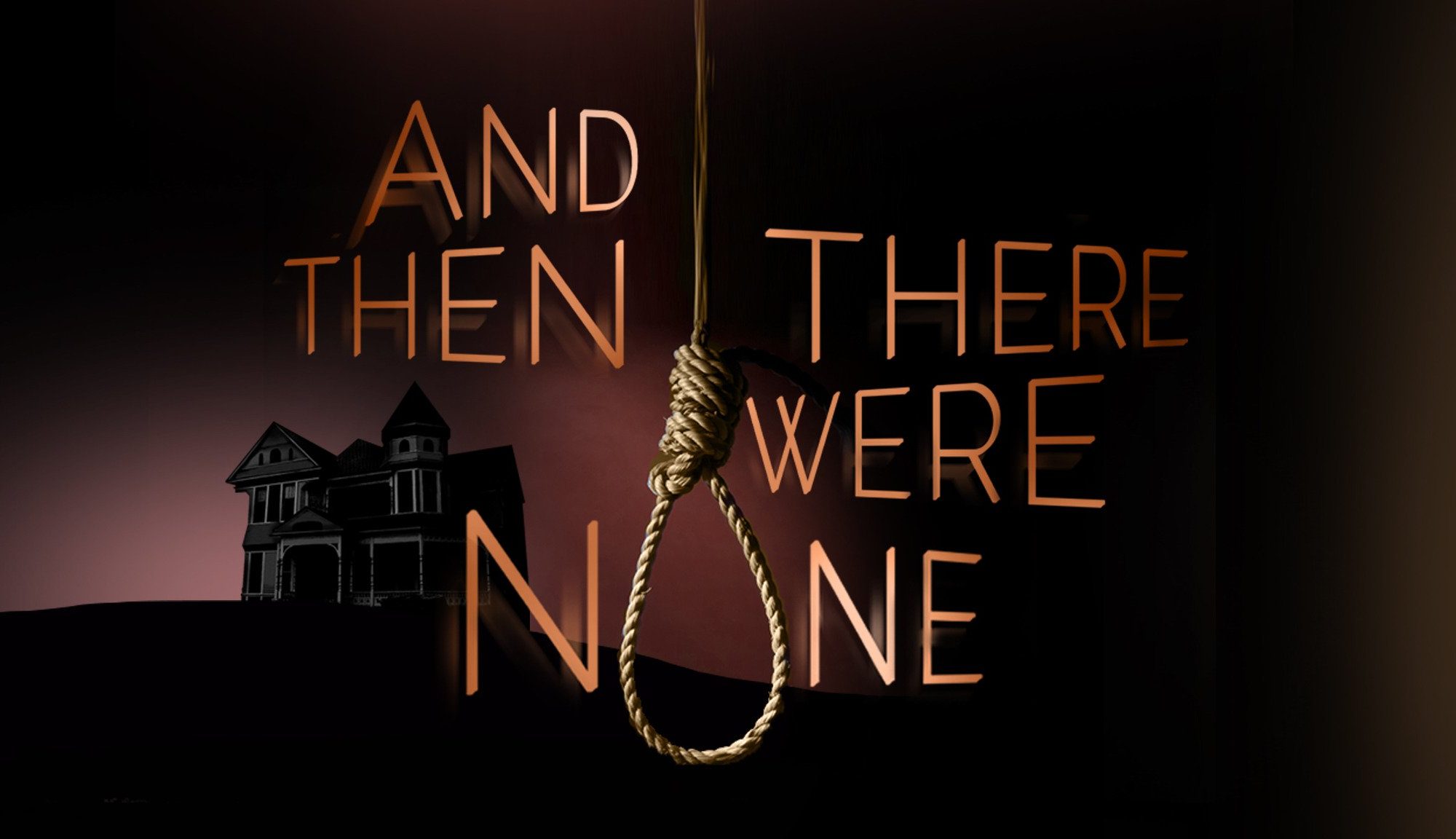 The theater community in Chicago has had many reckonings in terms of representation in criticism, casting, play selection, administrative staff, and boards, yet we don’t often discuss Marketing and PR. This week Drury Lane Theater put out advertising on social media and their website for their upcoming show And Then There Were None which was received with a firestorm of criticism. The primary marketing graphic featured a noose. END_OF_DOCUMENT_TOKEN_TO_BE_REPLACED

Free Community Event Explores the Question, “How do we, as POC and queer artists create space for ourselves in institutions where we are often ‘the only one’?”

CHICAGO (April 24, 2018) –Steppenwolf Theatre Company’s 2017/18 Multicultural Fellows are proud to present Crafting a Cohort, a free event that aims to unite people of color and members of the queer community (POC/Queer Folx) in various levels of theatre career tracks by providing a space for discussion and connection. This event is curated by the 2017/18 Steppenwolf Multicultural Fellows cohort. The Steppenwolf Professional Leadership Program Fellowship is for early-career people of color working in various theatre disciplines and provides paid professional development opportunities both in and out of Steppenwolf Theatre. Jackie Taylor, Executive Artistic Director of Black Ensemble Theatre, will deliver the keynote address. This event takes place on Monday, April 30th from 7-9pm at the Merle Reskin Garage (1624 N. Halsted St.). Admission is free and snacks and drinks will be provided. RSVP by clicking here. END_OF_DOCUMENT_TOKEN_TO_BE_REPLACED 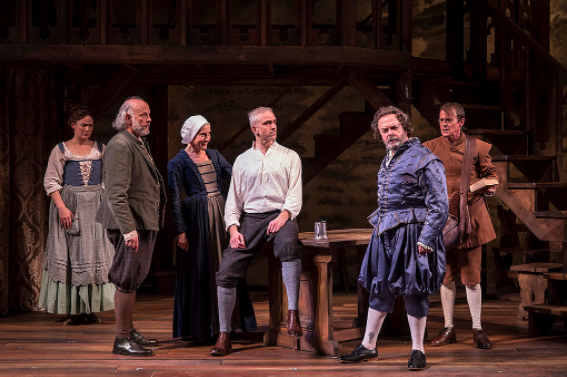 I am a woman of color who regularly directs Shakespeare and regularly encounters pushback when trying to convince producers and audiences that the words people often assume were written primarily for white, cis, able-bodied men can be shared by, well, everyone. That’s why I was so moved by Gunderson’s sentiment and so excited by the casting announcements made by the Denver Center and Oregon Shakespeare Festival regarding this play. (The world premiere in Denver included two South Asian actors — my desi heart soared!!) My heart sank, however, when I saw the casting announcement of a local company, Northlight Theatre, which included an all white cast and production team. Nevertheless, I attended the production in hopes of learning something new about this play and the world of William Shakespeare. I wanted to keep an open mind. And honestly — I wanted to support my friends. END_OF_DOCUMENT_TOKEN_TO_BE_REPLACED