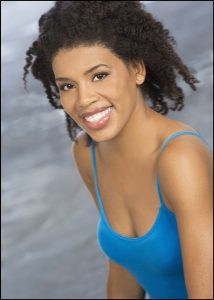 Age: Commodore 64 in the streets; age 25 in the sheets (of my acting resume)

Why do you want to write for Rescripted?: Because the process of decolonizing theatre begins with decentering the white experience as the default for value measurements. Theatre should be for everyone, of any background. And in order for everyone to truly feel welcome, the chorus of voices onstage and off must be exponentially larger.

What “lenses” do you bring with you when you go to a show?: Black, Feminist, Comedic, Writing, Working Class, Atheist, Raised Muslim. I appreciate this question because it argues against the fallacy that a theatre critic can truly be a “neutral” observer. One can, at best, be consicously aware of the lenses that their POV is filtered through while writing.

Who is your favorite theatre artist and why?: I would be hard-pressed to identify a favorite because I love such a wide range of styles, and I feel as if I have barely scratched the surface of the fruits that the discipline has to offer. However I was recently blown away by Alexis J. Roston’s portrayal of Billie Holiday in Lady Day at Emerson’s Bar and Grill. To be able to pay proper homage to such an icon while also bringing a fresh perspective, yet not falling into caricature is a hat trick that few actors successfully pull off.

Bio: Sheri Flanders is a professional writer, actor and comedian who teaches on the faculty of the Second City in the music department. She is also a theater reviewer for the Chicago Reader, PerformInk and Chicagoland Musical Theater publications, as well as a monthly comedy columnist for the Chicago Defender newspaper. Sheri is the author of Choice The Musical, half of the interracial married sketch comedy duo Flanders, has appeared in numerous theatrical and comercial productions, and is represented by NV Talent. Sheri holds a BFA in Fashion Design, as well as any cat that will let her.