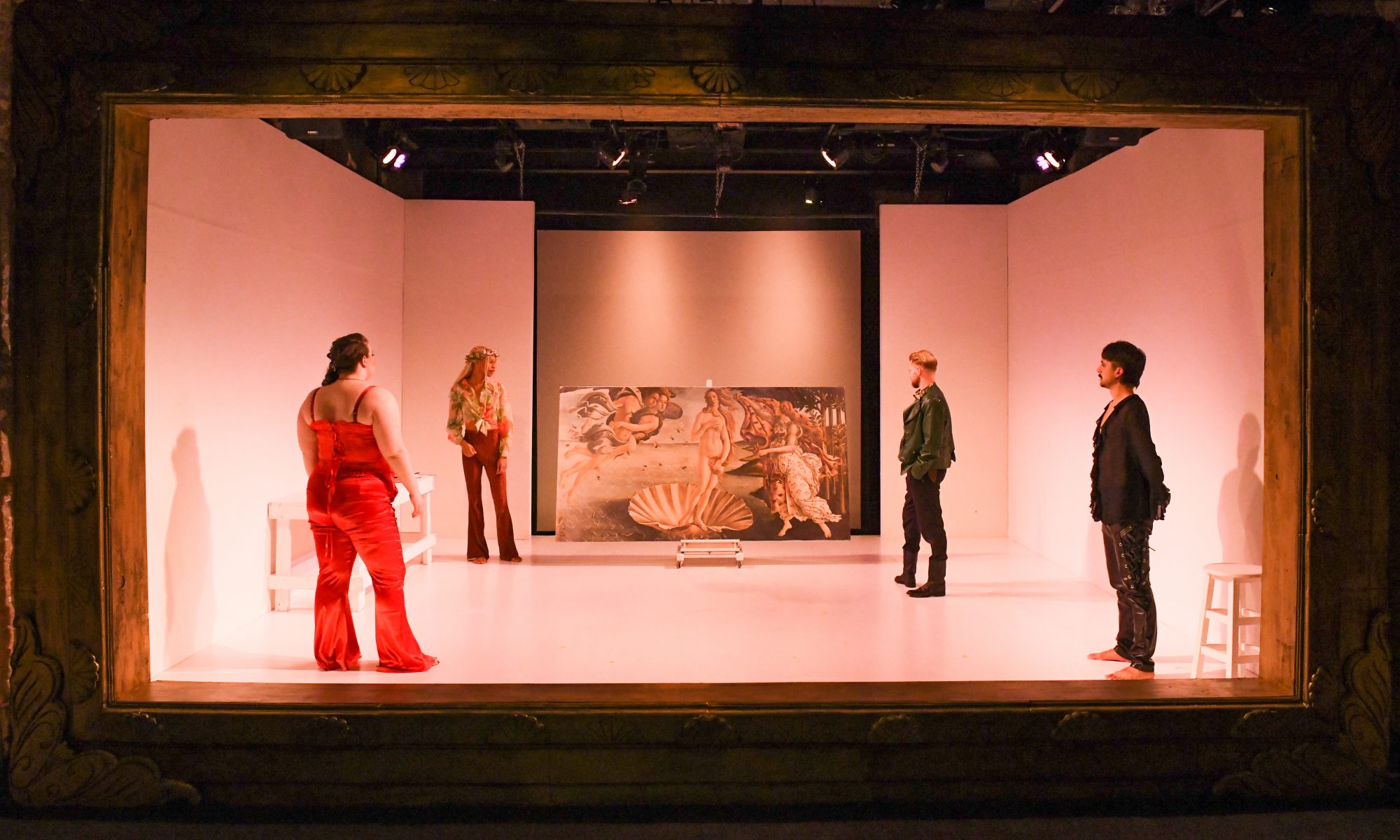 CONTENT WARNING: This review and the production it covers contain discussions of sexual violence, including childhood sexual abuse.

Today, in a small beach town outside Barcelona, I feel a thrill of excitement as I stumble upon an almost-familiar work of art by Sandro Botticelli. A prudent maiden moves to cover the nude and iconic figure from his most recognizable painting, The Birth of Venus. This is not the colossal oil on canvas housed in Italy’s Uffizi Gallery, but a smaller portrait-shaped rendition with only two of the many figures shown. An adaptation by Botticelli himself, and just the week before I had seen another adaptation of this same painting at The Den, produced by First Floor Theatre.

I am obsessed with literature inspired by great paintings. Girl with a Pearl Earring, The Improbability of Love, Hotel on the Corner of Bitter and Sweet. These stories, inspired fictions about the artistic process, are all uniquely moving, evocative, and tragic. First Floor Theatre’s production of Botticelli in the Fire has all these same ingredients for success and more — an up-and-coming new director in Bo Frazier, spectacular design and production elements, a rockstar cast  — and yet, Jordan Tannahill’s script falls short of its potential.

Sandro Botticelli (sensually portrayed in a notable performance by Alex Benito Rodriguez) meanders to the stage, declaring that he has waited 500 years to tell his story. Tannahill might take a few liberties, but the core of the tale is true to history: Botticelli is the hottest painter of the Italian Renaissance, and everyone in town wants to fuck him. Tannahill’s gaudy dialogue drips with self-indulgence and romantic ideas about pain. Botticelli instantly reminds me of Tiger King, an indulgent man whose word cannot be trusted and who weaponizes his queerness to selfish ends. I say this not to minimize the trauma depicted on stage, but to articulate that I have little patience for plays that celebrate characters with coping mechanisms as toxic and patriarchal as their oppressors’ violence. The intention seems to be to portray a man whose experience of sexuality is uninhibited, free of censorship, and fully his own. However, the text undermines itself by not taking his trauma seriously. For instance, an offhand comment that his current partner (Lorenzo de Medici’s wife) would have had him killed if he refused to sleep with her is ignored and quickly forgotten.

The play’s attitude toward Botticelli’s early sexual experiences struck me as insensitive. While some might unjustly gag at the mere mention of kink, or the idea that a child can have an emerging sexual identity, I was grateful to see this representation and was instead horrified by something else. Tannahill frames Botticelli as a would-be martyr of pleasure. While he both fucks and paints in pleasure’s worship as an adult, his only indulgence as a kid seems to have been masturbation. This is despite the many other extravagant pleasures (food, sweets, toys) that a kid might indulge in years before or even alongside an emerging sexual identity. Tannahill’s characters explain that because Botticelli was so obsessed with his cock as a baby, his mother once tied him to his crib to try to get him to stop — and that he enjoyed it. A child, who could not consent, and whose innate predilection for sadomasochism has supposedly already begun to develop, enjoyed it?

While this is not a childhood experience that Botticelli and I share, I was instantly reminded of passages on the same subject in Jillian Keenan’s academic-memoir, Sex with Shakespeare. For 18 years of her life, “from age ten to twenty-eight,” she wrestled with the perceived contradiction that she is a spanking fetishist who is “viscerally certain that fetishism is not caused by childhood trauma,” despite having been spanked as a child. And then, one day, she figured out that while early childhood trauma might impact an adult’s sexual experiences, “trauma doesn’t cause kink.” Instead, she insists, “if a child’s innate sexuality is nonconsensually inflicted on her, trauma is a natural response.” I’m confused as to how Bottecheli’s experience described in this play is any different.

Botticelli in the Fire cannot figure out its tone as it engages this unaddressed trauma. As a result, the production’s serious and self-aggrandizing air, meant to mirror Boticelli’s own personality, clashes with its more delightfully ostentatious and frivolous moments. To be fair, this is a play by a beloved American playwright and novelist, and its treatment onstage seems to be a natural outcome of a creative team falling in love with a play whose most remarkable features are secrets hidden between lines of dialogue. Tannehill cleverly drops in just enough subtext that working on this play must feel like an artist’s dream, with the unfortunate side effect that the audience may be left out of the conversation. Bo Frazier’s artful direction, a nuanced balance between tenderness and drama, could have masterfully enhanced a more deserving script.

Altogether, the production team did their best with what they had to work with. The onstage fighting and intimacy, deftly guided by Micah Figeuroa, is remarkably deliberate, in sharp contrast to the playwright’s much less careful treatment of such subjects. While I disagree with the patrons who proclaimed that the play is “incredibly sexy” in the bathroom at intermission, the scintillating, powerful, and evocative sound design by Willow James brought me very close to changing my mind. Lauren Nichols’ sharp and elegant set design is a white box-shaped room, not-so-subtly outlined in gold. In sharp contrast, Hilary Robios’ costume design sinfully colors Nichols’ otherwise blank canvas. I was impressed by the kink-inspired outfits donned in this play that are uniquely relevant to the text.

So much of this play feels familiar—the lack of consequences for the ruling class during a plague, riots on the street, religious conspiracy theories, censorship of art, and the uniquely intimate friendship bonds formed in the face of devastating trauma. Botticelli’s best friend Poggio di Chullu (given a devastating, hilarious, and sentimental turn by Yuchi Chiu) and his apprentice (a clever and romantic young Leonardo De Vinci, astutely played by John Payne) penetrate this story with the nuance and love that Botticelli is so desperately without. In his relationships with these two characters we witness some of the few textually consensual, romantic, and tender moments that make the play worth watching. Neala Barron similarly gives a jaw dropping performance as Medici’s wife, and Medici himself (skillfully played by Andrew Cutler) emanates toxic masculinity to a T.

Bottecilli in the Fire is a deceitfully seductive yet ultimately ill-considered play. The artists involved deserve a better story to tell. I cannot wait to see what they do next.

‘Botticceli in the Fire’ runs at The Den until November 5.

BIAS ALERT: I am peers with several members of the company. Sound designer Willow James is currently producing one of my plays at Pocket Theatre VR.