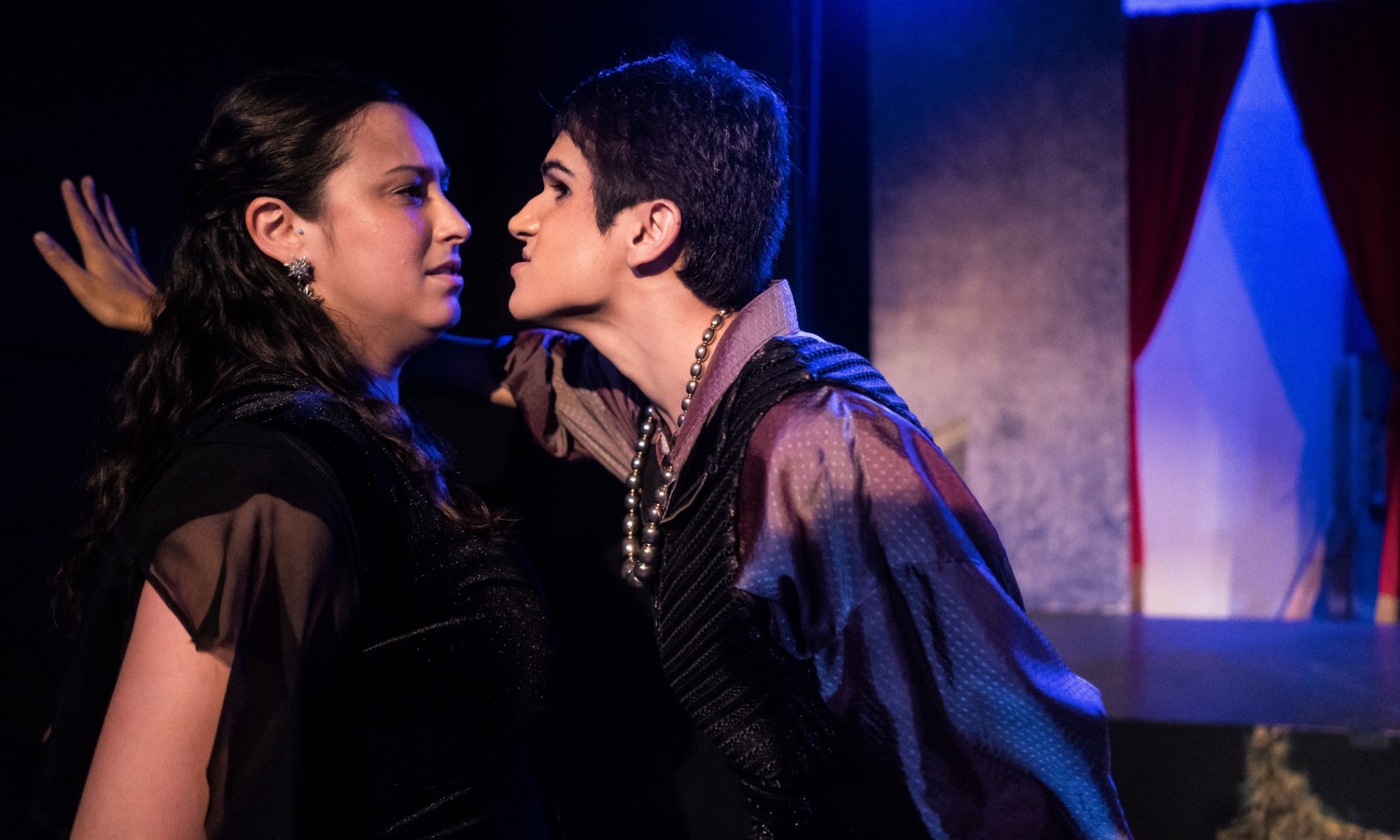 While Gloucester is the titular character with whom the audience is encouraged to empathize, he is still a villain. Thankfully, Gloucester is accompanied by fellow characters cast with disabilities, seen and unseen. Notably, Queen Elizabeth (Lauren Paige, she/her, in a heartfelt and knowing performance) carries a cane. In this presentation of not one but two leads with mobility devices, disability is no longer limited to the story of the villain. Elizabeth wants little in life aside from her husband and children to be alive and happy. As Gloucester torments her, Shakespeare’s ableism becomes reminiscent of the internalized racism portrayed by Rochester in Jane Eyre. It is heartbreaking to witness Queen Elizabeth’s family and internal power brutally plundered by her brother-in-law.

Gender is sometimes made obvious by kClare McKellaston’s clever costume design, but not always. Most women characters wear skirts or capes, with male characters wearing pants, but Elizabeth and Gloucester wear both. The Queen’s costume is still clearly more feminine, white with lace, but the overall design makes me pay attention to the role of gender in this world. The Queens’ and Lady Anne’s open grief and expressiveness ring out in stark contrast with the duplicitous men that dominate the play.

It is hard to carry Shakespeare, and Richard Costes directs a humor-filled and energized production, only slightly dampened by some slow transitions between scenes. Sydney Lynn’s set is barebones but works well with Costes’ blocking, and Jesse D. Irwin’s sound design makes excellent use of drum beats alongside some contemporary music. Lovell (Kayla Marie Klammer, she/her) and Ratcliff (Madison Hill, they/them)’s quick and witty dialogue inspires audience cackles as they and Clarence (Jennifer L. Mickelson, she/her), debate whether to kill the latter.

As someone who has been lucky enough to watch a great many Shakespeare productions over the years, I will not try to pretend like his writing is easy to understand. The subtitles playing above the stage, while meant to provide accessibility for deaf and hard of hearing folks, becomes an accessibility opportunity for all–whether that’s for folks who process written word better than spoken, or who like me, would otherwise spend the play struggling to keep track of who is who.

The casting of femme and disabled actors expanded my experience of the play akin to when I have seen the Bard’s work transposed into different places and times. The inclusion of marginalized people on stage felt genuine to the text and Costes’ direction of the play. It helped me recognize Shakespeare’s ableism, while also amplifying the richness and depth of his writing.

However, I wonder at the danger presented when the dramaturgical responsibility of a concept is left to actors’ identities alone. (I am not speaking for anyone but myself here, and I welcome differing opinions from folks with disabilities.)

In a more liberated world, I hope for much more to talk about than the identities represented on stage. I hope to analyze what the setting and style of the production say about cruelty and power and hope today. Perhaps my problem is that Babes With Blades’ Richard III doesn’t present a unique concept at all, but simply interprets Shakespeare’s text as it was written with the actors best suited to tell his story. In this case, I implore future productions of Richard III to improve and expand upon the bold strokes presented here. It is a uniquely Shakespearean joy to witness the catharsis of Richard’s deception and violent killings. At its best, this Richard III shows us a bloody but hopeful doctrine for change, both within and beyond the theatre.